Last Weekend, I played in the Ministry of Dice – PDM UK online gaming expo, and like my fellow DM-North writers, I wanted to follow suit with a report of my team build and matches.   The MOD always are top notch guys, It is always good to support the other Dice Masters creators events, Chris and Andy are one of the best ones out there.  An afternoon of dice rolling is always a good time, and I decided on giving God Catcher a try for the first time competitively to see how it fares against the new cards.  The night before I had the team all ready, when the doorbell rang.  Boy, was I pleasantly surprised when I opened the door and the Queen Majesty herself was standing in front of me.  Instead of trying to figure out a buy order to my team, I took the Queen out for a night on the town, and oh my that lady can handle her liquor…

Anyways it was the morning of the event, my eyes were blurry, but I could see sitting at the end of the table with a tequila bottle waving at me was Elizabeth herself using a Call Out keyword and called me a reference to a ‘Kitty cat’.  Today was redemption day, It didn’t matter if I won or lost,  It was a matter if could I make it to the end of the event standing….

The Team:  Oh God, Catch her in a photo while she’s smiling…

I knew from a few practice matches early in the week that the Godcatcher would be a huge part of the meta, however many players will be tech’d against the Godcatcher.  I still wanted to run the test and try to go for Godcatcher above any other win-con in my matches.   Static Field would be my number 1 enemy and I also knew there would be the Infinity Gauntlet tools to spin my stuff down to energy to prep for.   Some mid week testing with fellow Canadian General Nemesis was all I had with this team, and I knew from the games that the team is meta worthy and was just hoping for the best in my match-ups.  (Which is good to see that the meta is diverse, and with a couple returning card abilities like SWITCH, and Wonder Woman, this meta could totally be wide open…)

I also wanted to congratulate General Nemesis on his win in this tournament.  A very solid player from Canada, and I look forward to building many more teams with you to prep for future tourneys!! 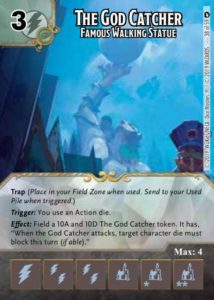 My team was build with 2 win-cons.  The 3 Cost God-Catcher – (Famous Walking Statue) rush build was Choice #1, but I was very lucky to pull the Super Rare Thor – (Jormungand’s Fear) in my IG feed, and he definitely is a top notch win con that can easily get damage to your opponent.  Everyone should know what these 2 win cons do but if you do not, the God Catcher is just a huge 10/10 Stat giant that gets triggered by using an action.  While he can be intimidated out, I still planned on timing the triggers at the right time to make them unblockable. 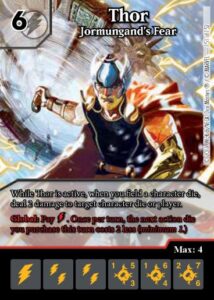 The Super Rare Thor was similar to the Super Rare Jubilee from XFC, however he triggers on any character being fielded (and not just sidekicks)

Thor can do lots of damage in this meta, and at a 6 cost, there are easy ways to get him purchased as early as turn 2.

The rest of the team were support and defence pieces.  Eddie Guerrero – (I Steal) was added as defence against Static Field,  When I attack, my opponent would not be able to blink anything back.  The Common Collector – (Stolen Cosmic Cube) was on the team to help Thor and fielding sidekicks one not only my turn, but my opponents.      I added Clayface – (Restless) as I know spinning and purchasing more godcatchers would be a good option; and in most of my games, I was able to use the Thor global, and pick up 2 God Catchers with the Clayface global.

The Defensive pieces were Gazer – (Evil Familiar) to Intimidate out threats like Drax, Mimic  – (Flying, Blasting, Slashing) in theory was there for taking care of bigger threats and capturing the win-cons of my opponent.  I added the Rare Drax – (The Pacifist), and of the three pieces I brought, it really was the only one I bought in all my matches today.  I never ran into the Static field threat, so i was fully on the gas pedal to see how large my fields could have gotten.

My Basic Actions were Confront the Mighty, and Under Surveillance.  Both were very helpful with the Godatcher, but with Confront the mighty I ran into issues twice where my opponent kept nothing in the field and Confront never was able to trigger which was my mistake in one match for sure… 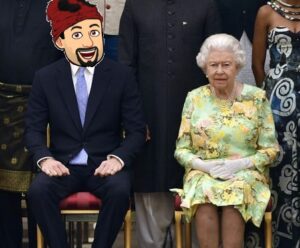 With the cards and dice in hand, The Queen and I went out to Denny’s for a Ultimate Skillet lunch.  My Colour printer wasn’t working, but I was able to create a playmat to honour my visitor, and she decided to play a drinking game during the tournament.  For every time Thor dealt damage, or whenever I fielded a God Catcher token (Later was changed to when i rolled a godcatcher die) I did a shot of Whiskey Sour. 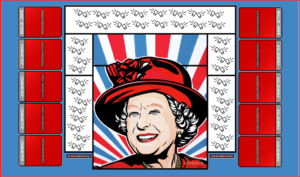 We had a full bottle of Crown Royal, a jug of Whiskey Sour mix ready for the tournament.  The Queen wished me good luck, and went back to binge watching episodes of 90 Day Fiancee, 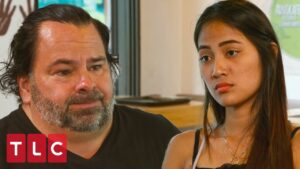 My First Match was against the evil Mr. Bye.   2 solid Matches against all blank cards.  There was Toyman, Pip, Corvus Glaive, all hitting the field, and did nothing against my wall of God Catchers.

Getting bumped to the top half of the bracket would mean my first match was against a 1-0 opponent.  I was paired up with El Tod, and his delightful group of Becky Lynch’s.  My plan and Purchase was simple, get a ton of God catchers and counter swing the Becky’s.  I had 4 godcatchers purchased in both matches, but None of them ever rolled for me… It was horrible luck, I was hit for 8 damage, then 8 against as Becky wasn’t messing around…  Godcatcher was hitting the snooze button, and i decided to put them in the microwave to warm them up for round 3.   Congrats to El Tod, his team was a solid Becky build and was happy to see her in the tourney and how far her build could go.

Matched up against another European in MrMcCat.  He had a Lightweight Brute team based around the 4 Cost Black Widow that can only be blocked by sidekicks with Overcrush.  He was pumping them with Parasites to make her huge.  I knew this was the matches for Drax to appear and I was able to control the Parasites in game one, and in game two the Black Widows.  Fun matches, the Godcatchers were warmed up and rolled in these games. 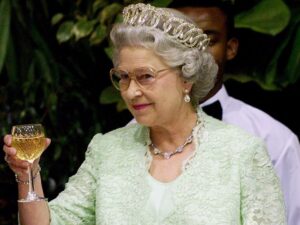 Match 4 was against fellow Canadian Jocelyn.  At one point I had 6-7 God catchers in the field and this was by far the game I did the most shots.   I won 2-0. 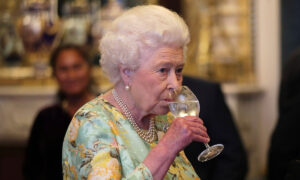 Last Round, I was 3-1 and had a chance for top 8, and was paired up against Jo from CRGR.  His team was a control team based around Poison Ivy and Asuka doing the discounts.  The match was a frustrating one for me, as a few times I forgot to do what I was supposed to do after passing priority, and just wasn’t rolling good.  Game 1 I had Jo down to 1 life and again miscalculated that he could field a sidekick.  I didn’t take anything back and was costly to me.  Jo ended up destroying me in the second match to finish in the top 4.

I ended up finishing 13th, and middle of the pack.  I was not a good pilot tonight and made some bad purchase decisions today.  It was my first competitive go with God Catcher, and honestly will most likely be my last time running God Catcher.  The buy order was very similar, and when you are playing alot of games, I would prefer options in my buy order.  If I was to make it more competitive, I should have dropped Mimic, and Gazer and went for Scott Hall Force attack globals to thin out my opponents field, or the Rare Black Widow would have been a good defence option.  One of my matches, I went against an opponent with the BAC, Bolter Drill; and I think it was a better option than Confront the Mighty.  People were expecting me to bring the Corvus Pizza team, but it would have just got hammered tonight.   I was pretty hammered by the end of the event, the Play-mat smelled like Rye, and I covered quite a bit of the shot icons.    I even found out I won a raffle and a custom set of the Token Dice!!!

The Queen was all set to return home, we had a quick plate of Poutine and Maple Syrup cookies.  We had to stop to get some Ketchup Chips for the road, and I could see her face as she said goodbye…  I will miss the Queen, until next year….. 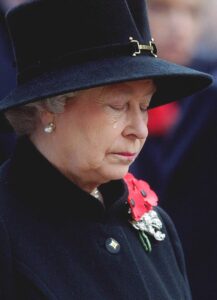