Before I start, I need to send a special thanks to my daughter.  I was going to go searching for an image for this article and she just happened to paint this recently.  It was laying on the kitchen counter as I was coming up to write this article.  I thought it fit nicely, and she was ok with me using it here.  Thanks for the cool dragon art!  Now back to our regularly scheduled programming…

What to play, what to play.  The original plan was to play a farewell to Cube Team today, but I decided against it.  Maybe next time.  The other thought going through my head was to take another look at Dragons.  I think these guys have a chance to be competitive in the New Modern Era.  How quick and lethal could they be though?  With the Ring of Winter… pretty decent is my guess.  Now I just need a way to build up to them…

The core of the Team is Dragons.  It really doesn’t matter which ones, but I wanted to be somewhat effective with my choices.  Silver Dragon is my first discount option to get to bigger things.  Gold Dragon was there to act as an anti-dragon option, in case someone else brought their own pets.  Red Dragon is Red Dragon.  Beefy and mean.  Now, I need some ways to buy these guys and feed their Breath Weapons. 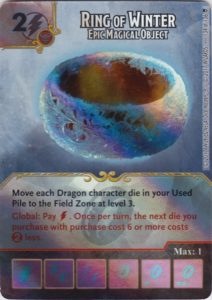 Two main tools came into play here:  Mimic/nPXG and Ring of Winter.  Ring of Winter has a great Global to make the big Dragons cheaper (especially when combined with Silver Dragon).  Mimic and the new PXG (nPXG) is probably one of the best ramp options going forward in the New Modern.  Also, Mimic could copy a Dragon late game to finish my opponent off.

The remaining pieces were open tech depending what I wanted to do.  I chose Dragon Statue Trap to see how it worked.  Any source of free Dragons is a good thing in my book.  Blob was there because Green Devil Mask sucks and I did not want to have to deal with it.  I am sure he can help with other things too, but this was his main purpose.

The BAC’s were really open here.  Resurrection was basic ramp and an alternative to Mimic if things rolled poorly.  Released from the Ice was left in my Team Box from previous games and I decided to give it another go.  Maybe I would be able to flow the Ring of Winter better with this action.

I was up against a Staff of the Forgotten One/Yondu/Magic Missile Team.  They were going to clear my Field and hit me with whatever they had.  Turn 1 Mimic and built to the Mimic/nPXG ramp.  The big problem here was that Mimic did not survive long because of Magic Missile.  I ramped, but not nearly as well as I should have.  I got my Silver Dragon out and eventually worked my way up to a 3 cost Red Dragon (that alone felt good) by combining the Silver Dragon and Ring of Winter Global discounts.  I realized with the Staff, he was able to ping my Dragons out easily and there was no real point to building up a big board.  I started attacking with the Silver Dragon to soften him up.  Eventually, the turn came where I rolled a Red Dragon, Mimic and a Sidekick.  I already had a Sidekick in the field and I had to make the decision to pivot.  I fielded the Red Dragon and Sidekick.  Fielded Mimic and copied the Dragon for the stats.  Swung in with a Breath Weapon to clear the field and just enough damage for lethal.

Son of L brought Villain shenanigans (Rare Avalanche being the big offender here).  We both rolled awful for the first few turns.  He eventually got his Avalanche out and started pinging out my weaklings (Mimic and Sidekicks are easy pickings).  I could not roll Silver Dragon… At all.  I resorted to buying a Red and Gold Dragon with just the Ring of Winter discount.  I could not get Ring of Winter or Released from the Ice to come up when there was anything in my Used Pile.  Eventually, I got the Red and Gold Dragons to roll on the same turn and enough extra energy to power the Breath Weapons.  It was again, just enough damage for lethal.

Up against a pretty classic Bolt Burn Team (Firestorm, Firefly, Cheetah, etc.) with a dose of Cube to make it hurt more.  Learning from my last game, I decided to skip the Silver Dragon.  I bought an early Ring of Winter and Mimic instead.  Bought a Red Dragon for a discount and fielded him the same turn on Level 3 in front of a clear field.  He came out the very next turn for a repeat performance (Level 2 this time).  For his third appearance, there was a small field and I needed the Breath Weapon to clear out some blockers and swung in for lethal.

Dragons are legit.  We may be losing some of the less expensive Dragons with Rotation, but the big ones are not difficult to purchase with the tech we have left.  Ring of Winter is pretty much a must on any Dragon based Team.  I would probably keep Silver Dragon for the discount even though it betrayed me in that one game.  It is not an essential piece, but it sure helps.  I never got a chance to use the Dragon Statue Trap, but sure would like to see how it works.  I think emergency Dragon blockers is a great idea.  I just did not see it work to be honest.

Blob never came into play tonight.  I could have probably used him in a few situations, but he actually would have slowed me down.  Still a nice piece to have as a just in case.

Mimic was a great flexibility piece on this Team.  Early game he was excellent ramp.  You just need to watch the Bag Burn potential with him.  Late game, he became a heavy hitter when needed.  Definitely works well with this Team.

As for the BAC’s?  Resurrection is good for alternative Ramp.  You are going to need lots of energy on this Team, so any source is a good thing.  Released from the Ice was “meh” here.  When I did buy it, it never came out at the right time.  I might be tempted to go with something like Investigation or Cake in another incarnation.  I actually debated between Cake and Mimic on this Team.  I think they both work here.

Overall, I can see Dragons making an impact in the Meta.  The Ring of Winter is too good of a tool to leave in the toolbox.  Mimic/nPXG pairs incredibly well with these giant beasts.  This nice thing about multiple Dragons is that it is almost Shriek-proof.  Even if she takes out one of the beasts, there will be others to deal out damage.  If you have a chance to play with this type of a build, I highly recommend it.

How would you bring Dragons into the New Modern?  Do you think they can compete in the Cube-less Meta?  Let us know in the comments below.