Regular Golden Age Constructed this week.  The core of this week’s team is about as simple as it gets – take the lowest purchase cost Overcrush character in the game, and use the ability of another character to fix the reason it hasn’t seen much play. 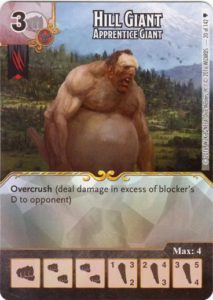 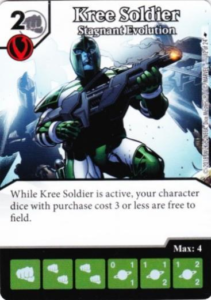 Hill Giant: Apprentice Giant is the only character in the game with a purchase cost of less than 4 with the Overcrush keyword.  His fielding costs are brutal, but that can be worked around with Kree Soldier: Stagnant Evolution.

Now, two cards do not make a team, especially when they’re not Basic Action Cards*.  Hill Giant has the Evil alignment, so I added Uncommon Wererat. who gives +1A/+1D to my Evil characters who have a purchase cost of less than 3.

The main reason Wererat went on the team was to buff my Hill Giant dice, but I opted to include a couple of other characters who would also benefit from it.

One of the players in our group is quite fond – arguably too fond – of bringing Common Tabaxi Rogue.  Now, the methods players use to force the opponent to draw dice from their bag to trigger Tabaxi Rogue’s damage involve basic actions and global abilities.  Both of those are, or course, available to both players.  So, bringing my own copy of Tabaxi Rogue levels the playing field, so Tabaxi Rogue makes an effective counter to himself.  As a plus for me, Tabaxi Rogue is a 3-cost with the Evil alignment, meaning it will be buffed if I have an active Wererat.

Also, I’ve been seeing quite a bit of Plague Marine: Vectors of Death and Disease the last little 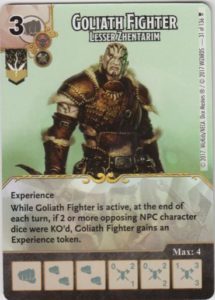 while.  That’s the one the gives its owners Sidekick dice +1A/+1D and also KO’s them at end of turn.

I decided to include Green Devil Mask to try and keep the number of chump blockers my opponent could field under control.  In that vein, I opted to include common Tomb Dwarf, a 4-cost mask whose ability is to make Trap dice cost 2 less.

As my last non-BAC card, I included Supreme Intelligence, almost entirely for the global.

My BACs were Cone of Cold, a staple of Overcrush teams since its first release, and Guardian of Faith.  The thinking with the latter was to make it difficult for my opponent to simply let my Hill Giant dice through.  If they tried such a strategy, I could use Guardian dice to ‘block’ my Hill Giants, keeping them in the field while still doing damage.

How did the games go?

*Team building rules in Dice Masters only require 2 Basic Action Cards.  There is no minimum on character/non-basic action cards, so you can have a legal team without any.  Not that we recommend it.

This gentleman not only brought the Plague Marine I mentioned in the previous section, he weaponized it.  By that, I mean, he brought Black Manta – Deep Sea Deviant and the UC Malekith who makes Sidekicks into Villains.  With Manta, Malekith and Plague Marine in the field, when the Sidekicks are KO’d at the end of the turn, they deal 2 damage each.

I went for Tomb Dwarf early, and fielded plenty of Sidekicks.  My opponent wasn’t attacking, relying on the Black Manta/Plague Marine combo for his damage.

He got me down to 10-12 life before I got Green Devil Mask out for the first time.  The game completely turned around from that point.  My bag was sufficiently thin that GDM was coming out almost every turn, and triggering on each of his turns.  I never missed rolling it, thanks to a little bit of help from his running Parallax.

He did not have much luck on the GDM-triggered re-rolls, and about the fifth time it happened it completely wiped his field.  He essentially conceded at that point, not bothering to re-field anything after that.  So I eventually romped through his empty field.

With the exception of one Kree Soldier die on my side, neither of us could seem to roll fist characters in the early game.  It took him forever to get any of his Half-Orc Barbarians on to the field.  Things were a little better for me, but not much – there was one turn where two Hill Giant dice came out at the same time, which he let through for 8 damage.  Except for that turn, however I was doing about as well with Hill Giants as he was with Barbarians.

There was one turn where I had 7 energy, where I opted to buy a Supreme Intelligence die for the big body.  I really should have bought a Green Devil Mask.

We fell into a pattern where he’d attack, and wipe my field, gaining Experience for his Barbarians and Paladin along the way.  I’d roll 7-8 dice each turn, but since I needed character dice to re-establish some kind of wall, and some energy to pay fielding costs to do so, I seldom had much energy to spend on new purchases.  I don’t think I ever saw 4 energy with a mask again.

He wasn’t getting any damage through.  He outnumbered me, but never attacked with any of his Sidekicks or other weaker characters (which I wouldn’t have been able to block) to wear me down.

Still, even with that, I was largely delaying the inevitable.  Eventually, there was a turn where I was unable to field as much of a wall as I hoped.  Realizing, he was going to win on his next turn regardless, I conceded at that point.

Rare Angel from AvX who becomes unblockable when you use an action die.  Thrown Brick and Relaxing.

I didn’t go for the Thrown Bricks early, which allowed him to scoop up all three on his first two turns – a lapse in judgment on my part.

Hit him for 5 early by sending a Hill Giant through an empty field.  He chipped away at me with unblockable Angels.

He’d bought relatively little besides action dice and Angels, and attacking with the latter left him with a thin field.  Including one critical point in the match where he had only a single Sidekick.

His solitary Sidekick blocked my Wererat when I attacked with my entire field.  A Hill Giant, a Goliath Fighter, a Kree Soldier and some Sidekicks combined for 14 damage to bring him down to 1.

He was unable to take advantage of my empty field on the next turn.  He got 3 Level 3 (4A) Angels out soon after (two of which he’d pulled with Relaxing, somehow landing both on Level 3 on his 1 opportunity) but as I was still at 14 life it wouldn’t have been decisive, and would have left him wide open.

He compromised, and attacked with only one.

On my next turn, I rolled enough Sidekicks and regular characters that I outnumbered him once they were fielded.  And with him at 1 life that was all I needed.

It’s a fairly basic team, but that doesn’t mean it’s not effective.

Hill Giant has decent A/D stats for its cost.  It’s the fielding costs that are the problem, and Kree Soldier makes an effective work around for that.

Is the buff Wererat provides worth his cost?  I’m undecided on that.  I’d like Wererat a lot better if his Level 2 D was more than 1.  If I find myself needing to block with him, even a Sidekick KOs him.

Tomb Dwarf was something of a waste.  I only bought one GDM on the night, and spending 4 energy to get a discount on a single 4-cost die is not cost effective.  (I’d intended to buy multiple GDMs when I bought Tomb Dwarf, but I ended up only needing the one.

In retrospect, Supreme Intelligence isn’t a great fit on a team with only a single 2-cost.  I may consider swapping it out for something with a different Prep global.

Goliath Fighter was solid, if not spectacular.

I never really thought about buying Guardian of Faith on the night, which may be a sign that there are better options for the other BAC.