In my last article earlier this week, you’ll remember that I threw in Asuka for her discount. She’d taken a bigger role than expected, and I really wanted to focus more on her this time around. So let’s start this…

The Team:  Let’s spark something here.

From the moment you click on the link, one thing should stick out: Everything, and I mean everything, in this team is a mask type. So if Asuka’s fielded, everything’s cheaper. The main idea was to use her discount to buy Xanathar for cheap, and buy tons of Mimic dice. With Mimic’s removal, I should roll him often, and all of his character faces have a burst, perfect to trigger Xanathar’s Spark ability. Xanathar also gives me a global that can help ramp with spare energy. 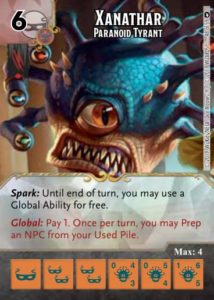 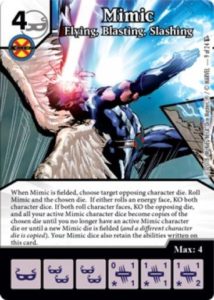 But what do I do with Spark? Time to bring out Ric Flair. A pricey global for sure, but if I use Spark, that shouldn’t be much of a problem, right? Which brings me to ask myself: sure, I can make characters bigger, but how do I get damage through? I went for Bobby Heenan to make my characters unblockable, combined with Mutation to help me make sure my biggest bruisers are at level 3. 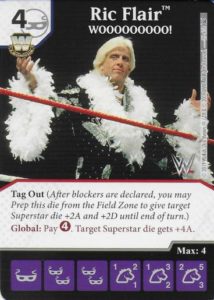 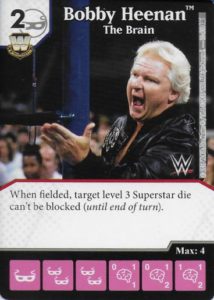 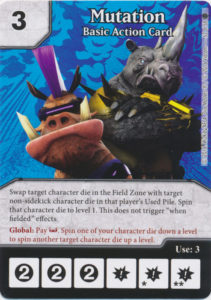 All these shenanigans mean nothing if I don’t keep control of my bag. So I threw in some trusty Thrown Bricks for ramp and churn. Heck, as a bonus, they give me extra burst faces for Xanathar! But of course, there’s the (obvious) chance that my opponent will buy my bricks. So I threw in Tabaxi Rogue and Mankind as deterrents. Tabaxi burns my opponent, and Mankind just allows me to ramp when my opponent ramps (with Bricks or otherwise!). Oh, and if I use Tabaxi’s global with Mankind active, I get to Prep 2 dice (1 from the ability, 1 from Mankind triggering from my opponent Prepping a die). 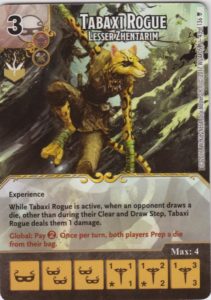 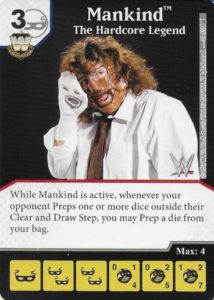 And for the final card on this team, of course Big E was going to be in here. Way too much combat damage around these days. 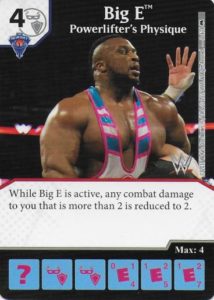 I started off against Iceman. Since I had no Shriek here, my defensive options were rather limited. He blanked Mimic to deal with my removal, and bought no characters besides Iceman and Shriek so that I couldn’t use Mutation’s action against him. I had to save bolts to ping Iceman. His strategy ALMOST failed though; one turn I had gotten his Shriek off the board, had Xanathar active, and had 2 dice that, if they’d rolled burst, would’ve allowed me to use the Ric Flair global for free twice and given me enough damage to win…and then both dice came up as energy. He won the following turn.

I followed up by going up against Becky + Parasite + Booker + Jerry, mixed with tons of control. I went for Asuka and Thrown Bricks to establish early ramp and buy tons of dice. My opponent’s Shriek would not roll, but her Becky Lynch dice really liked their level 3 side. So she dished out a lot of damage, but while that was going on, Mimic was doing his thing (KO’ing Becky, forcing my opponent to spend resources re-fielding), and I got Mankind both for his  high toughness and to punish my opponent for ramping. Late in the game, key turn: my opponent attacks with Becky (w/Booker and Jerry globals), I block with everything to diminish the damage. On that turn, using the Tabaxi global with Mankind active, I Prep 2 dice (and this is with my Prep area already being huge thanks to 2 Thrown Bricks), which guaranteed I would roll 2 Mimics the next turn. The next turn, I roll 2 Mimics, Asuka, Bobby Heenan, Xanathar, and 1 Thrown Brick. The Mimics and the Thrown Brick do away with my opponent’s 3 characters (and hey, one Mimic became a Parasite!), Asuka’s buffed by everything else that’s fielded after her, and because I rolled a stupid amount of dice, I got to use the Ric Flair global to push more than 20 damage through. And I won. It was nuts. Oh, and I didn’t even buy Big E all game (probably should’ve).

I had the bye for this round. And unfortunately, from there on, the matchups were messed up and we were unable to set up a fourth round. So that game 2 was my last one of the night. Sad.

-Due to the small sample size (2 games), I didn’t get to experiment all of my shenanigans. Mutation and Bobby Heenan never got a chance to shine.

-Xanathar’s Spark effect didn’t get much time to shine, as the games tonight were too darn fast. But when it fired off, it was funny to have that freedom to use a global for free at the desired timing. Also, Xanathar’s global is a great energy sink. Definitely not to be underestimated.

-On what did shine: Asuka’s discount. Now that I focused more squarely on her, that discount is just insane. The second she hits the board, the shift in the game’s economy is quite visible, especially when you bring yourself different weapons to use. And in this team, she often grew bigger than Xanathar with her other ability. It’s crazy when you think about it.

-On Ric Flair’s global: I am sold. Between the Xanathar shenanigans and just being able to dump all that spare energy into a big attack, he’s solid for sure.

-Mankind is really cool. Just telling my opponent, “go ahead and ramp, I’ll ramp too!” is far more effective than Tabaxi’s damage. People are willing to take damage far more readily than they are willing to let you ramp (and with good reason). Is he the first go-to for a major competitive build? Maybe not (way too much stuff that wins quickly in this meta), but he’s solid and well worth looking into.

So overall, this was a solid build with fun shenanigans. I wish I had gotten more of a chance to experiment with Spark, but I can do that again some other time.