This past week my local scene was finally able to get together for some live play for the first time in over a month.

We’d been drafting Kryptonite Crisis when we had been getting together before the unplanned hiatus, so I hadn’t played a constructed team in quite a while.  I didn’t trust myself not to mess up something with too many bells and whistles, so I decided to play something fairly simple. 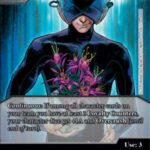 I decided to go with a team based around the Living the Dream basic action.  It’s a Continuous Action which, once I have a total of three loyalty counters placed on character cards on my team, gives ALL my character dice +1A and Overcrush. 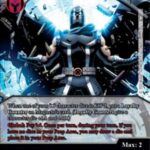 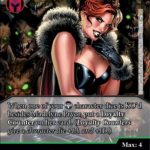 Enter Mystique:  Freedom Force.  A 2-cost mask with the Brotherhood affiliation.  KO her twice, Magneto and Madelyne Pryor each get 2 loyalty counters for a total of 4, and the trigger condition for Living the Dream is satisfied.  And KOing something that’s 1D on all levels should be simple.  Granted, her fielding costs are horrendous for a 1-1, but I should only need to field her a small number of times.  This is also the Mystique that reduces direct damage, so leaving her in the field after she’s spent her necessary turns as KO fodder isn’t the worst thing in the world.  She also has a ‘When KO’d’ ability that might allow me to prep a Magneto die in my Used Pile (he’s the only Brotherhood character on the team with a purchase cost of 4 or more) but that wasn’t really a part of my plan.  If it came up where I could take advantage of it great, but I wasn’t going to rely on it.

But is getting her KO’d really that simple?  Given her low A, if I attack with her, my opponent is likely to simply let her through.  So I included the Rare Monsieur Mallah, who forces at least one opposing character die to attack each turn while he’s active.

So the plan is to have a Mystique die in the field with Monsieur Mallah, block with it to get it KO’d and build up loyalty tokens.

But, just in case my opponents had means for spoking the wheels of this plan, I included common Darkseid from Kryptonite Crisis for his global.  Said global costs a bolt and a fist to deal 1 damage to a target character die and lose 1 life.  I don’t love the latter, but again, I should only need to KO 2 Mystique dice to get Living the Dream working, so it’s tolerable.

While I could have included something like the Dark Phoenix global instead, I decided I didn’t want to make that global available to my opponents.

That’s five characters and one BAC so far.  So what do I use for the remainder of the team?

Characters with good stats and low purchase costs seemed the route to go. 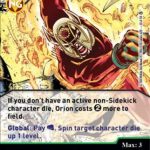 Orion’s global allowed me to feel comfortable about putting common Starro on the team.  I should be able to reliably get Starro up to his 7-7 Level 3 side, and complicate my opponent’s blocking.

For my final character I opted to go with the common Ms. Marvel from Infinity Gauntlet.  She’s a 3 cost blank.

For my second BAC, I chose Radicalization for the global.  If I had a shield to spare, I could give one of my character dice that was about to be KO’d the Brotherhood affiliation, which would give Madelyne Pryor a loyalty token.

Note that loyalty counters give +1A/+1D per counter.  Magneto has decent stats, and with the buffs from two loyalty counters and a Living the Dream Die he’d be a 9-10 at Level 3.  The down side of him is he’s a 6 cost, he has high fielding costs, and a Max Dice of 2.

With the same buffs, Madelyne Pryor is a 5-6 at Level 3.  Not useless, but less of a threat than several of my other characters.

So how did it work? 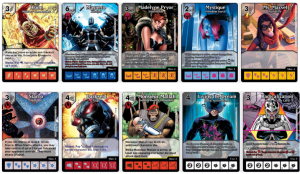 This was against a combination of Wolverine: Lord of Vampires and Foetid Bloat-Drone.  The former to deal damage when the latter KO’d my field.

The team also included a Dark Phoenix and a Kate Bishop with the push back (or in some cases pull back) global.  The former meant the Darkseid global wasn’t going to see any use, and the latter gave him an alternate defense against Overcrush characters.

His early rolls weren’t great, and by the time he got Bloat-Drone out he was only able to wipe my field once.

After that he was mostly on the defensive, trying to maintain enough blockers and save enough masks for the Kate Bishop/ Static Field global to prevent me from delivering the coup de grace.

He largely succeeded in that, but he wasn’t doing any damage of his own.  The end result was a very long game, but my opponent eventually conceded after concluding he was really just prolonging the inevitable with his actions.

He missed the memo about the force attacking primates.

I missed the one about the “Everyone must block the one character die with Deadly”.

Not fielding sidekicks slowed me down a bit, but allowed me to survive long enough to make Jourdo sweat at least a little bit.

He got his Madame Web/Chimichangas combo to fire off, and I couldn’t survive the resultant damage from Deathbird.

Against a Superman Family team with Jimmy and Lois to buff his Rare Superman dice, each of which changes the A of another die to 6 when it attacks.

This was a lengthy game, as it took both of us a while to build up our fields.  I got some licks in, but eventually the edge swung to him, as buffed by Lois and Jimmy his Superman dice had 10D on Level 3.  That made them extremely difficult to KO.

So he was able to thin my field with his attacks, especially when he had a Thrown Car die to assign, and I couldn’t do the same to him.

I made a last gasp attack, since we’d reached a point where waiting was clearly only going to make the situation worse for me.  I didn’t really expect said attack to work.  It didn’t.

I felt going in that my engine for KOing Mystique was a little on the clunky side.  In the event, it proved even more awkward than I anticipated.  One of my opponents having the Static Field global, and another running UC Deathbird were complications to that I hadn’t really anticipated.

Nor was I really prepared for two of my three opponents force feeding my entire field into characters with Deadly.

Otherwise, I felt the team worked OK.  Not great, but definitely not bad.

The first change I’d make the team is to completely change the plan for KOing my Mystique dice.  Maybe including a Dark Phoenix card for the global, or maybe something like the UC Penguin from World’s Finest that deals 1 damage to all non-Villain dice when they are fielded.

If Magneto’s Max Dice count were higher I’d have gone the Dark Phoenix route to begin with.  With only 2 dice permitted on Magneto, and no real need to include any other characters costing more than 4 or the team, including Dark Phoenix on the team felt like a bad idea, as my opponents were likely to get more use out of the global than I would.

I’d probably also switch out the UC Mystique I used here for the 3-cost Rare.  Because the Rare allows Brotherhood characters to be fielded for free while active.  If I’m able to keep one Mystique die in the field, I’ll save energy in the long run by being able to field my Magneto and other Mystique dice for free.

In summation, it wasn’t a terrible team, but it wasn’t one that really stood out in any way.

What other changes would you make to this team?

Let us know in the comments below, or on our Socials (@dmNorthTV), or join the conversation on our Discord.