Week 2 of our Theme nights. For those who didn’t see last week’s article, here are the rules:

In trying to make the Legion of Doom viable, though, I made them a bit too strong.

With Golden Age allowed, I decided to go old-school. Cheetah and Black Manta are my two main sources of damage. 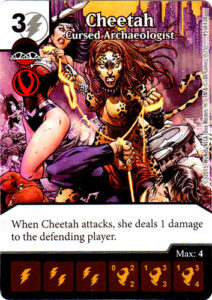 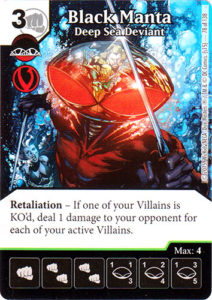 Cheetah is a classic aggro character. She hurts my opponent when attacking, and if my opponent lets her through, that’s another 2 or 3 damage. Or my opponent can block, and she attacks and deals more burn damage next turn.

Black Manta’s retaliation is especially punishing if my opponent blocks my characters. If I have a couple of other Legion of Doom characters, that’s potentially 3-4 damage per character you KO. So between these two, it’s bad choices all around.

Giganta serves two functions: She’s a bruiser (especially when she gives herself Overcrush), but also, I use her global to spin down my blocked characters, so they’re KO’d and Manta’s retaliation can trigger. It’s a nasty little surprise.

Grodd gives me a fixer for consistency, and a big near-unblockable body. Sinestro’s another hard character to block. So I give myself two ways to win: burn (Cheetah + Manta) or unblockable damage (Grodd + Sinestro). This gives me flexibility in case I run into a control team.

Speaking of control, I knew I wanted Lex Luthor in this, but I didn’t know which one. The rare from Justice League was really, really tempting, but I wanted to keep costs leaner and not make everyone hate me. So I went for the World’s Finest uncommon, which can shut down big bruisers. It can come in very handy.

And since Lex is on here, I’m allowed to use Kryptonite, as it then fits the theme (seriously, if there’s anyone in the DC universe who always has kryptonite, it’s…well…Batman, but also Lex). Having blanking is handy to deal with annoying control pieces.

Villainous Pact serves for ramp and, if all else fails, neutralizing blockers acts as a secondary win condition.

Which brings me to the last two pieces, Truce and Scarecrow (a.k.a. Rarecrow). These two are meant to be used together. Use Truce, KO Scarecrow, they KO their stuff, you steal what’s left. It’s fun, and it can hurt since I have Black Manta. Heck, if I do Villainous Pact first, they choose the character they block with, then I use Truce, and steal the only character that was allowed to block. Overkill? Maybe, but fun.

So with that said, on to the games!

I went up against the She-Hulk team from last week (again, one player is exempt from building theme teams due to his condition). I went for Cheetah, Cheetah, and more Cheetah. I did get Black Manta and Kryptonite, but I wanted to beat down my opponent as much as I could before Hulk arrived. And it worked; Cheetah dealt huge chunks of damage while my opponent went for energy over characters. When Hulk arrived, I was at 19 life, he was at 5. I just kept up the pressure, used Kryptonite to keep Hulk in check (and one time, to blank Shriek so Cheetah could hit), and eventually chipped my opponent down to 0.

My opponent ran Teen Titans, slightly improved from last week. Field tons of Titans, use SR Starfire, attack me for lots of damage. This game, Kryptonite did nothing (thanks Raven…). But I did manage to mess with my opponent’s pace by buying Giganta, forcing him to get Cyborg. The fear of Overcrush, added with Cheetah and Manta’s damage, forced my opponent into bad choices; even attacking with Starfire started hurting my opponent more than me (block with Cheetah, Manta’s retaliation triggers). I just kept chipping away and eventually won.

I faced off against a Bat Family team. Since I saw a similar concept the previous week, I knew to expect tons of removal, lots of pain, and big Batman dice. So I went aggressive early with Cheetah again (by that point, I could tell it was the go-to strategy), but when Bruce was on the field, I had to switch gears, as being too aggressive would mean big bad Batmen on the field. So I went for Grodd, and I eventually won on a big Grodd + Cheetah attack that left no opening for my opponent.

I faced off against an X-men team. This player also went for some old-school shenanigans, with Storm: Goddess of the Plains, a classic, hugely annoying piece of removal. Add to that big Overcrushing X-men, and this was a painful game. I had to pick my battles, know when to block and when to take damage. I ended up taking a gamble and letting 2 Overcrushers through for 14 damage (leaving me at 3 life), in the hopes that I would roll enough characters to deal 11 damage the following turn. I ended up drawing and rolling 3 Cheetahs. I won.

-I’d forgotten how much Cheetah and Black Manta could hurt. They may be older cards, but they can still hold their own, as they just deal tons of damage over time.

-I like that this theme allowed me to include a blanker (Kryptonite) and a fixer for consistency (Grodd). It made for a well-rounded team overall, which is a big reason why I won.

-The whole Truce+Scarecrow combo was a cute idea, but I never ended up pulling it off. Cheetah simply wins faster, and with the level of teams people brought, I had to go for speed to win.

-Based on the theme, I could’ve built my team very differently; I could’ve put Captain Cold’s Cold Gun, or Bizarro, or even Riddler. Legion of Doom, as a theme, certainly has a fair bit of depth when you don’t restrict yourself to the affiliation.

Overall, this was a lot of fun, and a good concept for a theme team. I might revisit the idea with different pieces if we do other theme nights later.