Do you listen to the Ministry of Dice Podcast?  If the answer is “no”, you should really take a long hard look in the mirror.  However, if the answer is “yes”, you might recognize some of the piecesin this week’s build. 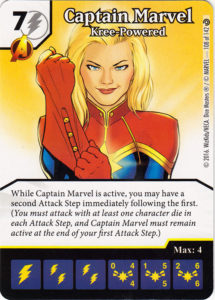 The Boys across the pond brought up an older card that just never really hit the mainstream… Captain Marvel from Civil War.  She has such a cool ability allowing you to have a second Attack Step.  It should have been amazing, but she never really saw much play.  The purchase cost may have been the biggest deterrent, but who knows for sure?  The bottom line is that she has been criminally underused. 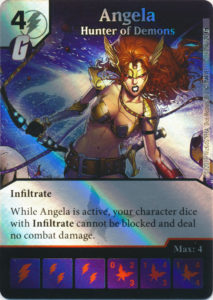 So, how do we make the best use of this ability?  Again, the MOD Squad made the suggestion of a nice little keyword you might recall called Infiltrate.  For those unfamiliar with the ability, unblocked characters with Infiltrate can be called back and deal your opponent 1 damage.  Great ability if you can make these characters unblockable easily.  Enter Angela from Guardians of the Galaxy.

With this duo in place, the shenanigan machine should be in full effect.  So, without further delay, I present to you my Ministry of Dice inspired Team Build (or MMODITB for short… rolls right off the tongue).

The core of the Team is to have Captain Marvel and Angela out with other Infiltrate characters and deal double the damage as a result of the double Attack Step.  First, I need some other Infiltrate options.  Spot is the cheapest character with this ability, so he was an easy add.  Ricochet was added for his Prep ability more than anything.  I need options to get to a 7 cost character and if he can fire early enough, this should not be an issue.  The final infiltrator that I added was Black Widow.  She doubles the damage the Infiltrate causes and basically a nice overkill option.

With the main core in place, I needed some accessories.  Ring of Winter was there for the Global Ability.  Any way to decrease a 7 cost is a good thing, and 6 feels so much more achievable.  Mew Mew was in place to almost guarantee the bolt needed to get Ring of Winter to fire.  It also served as a removal option if necessary.  The final character I used was Heimdall, again for the Global.  I am still trying to learn the best way to use this, and figured it was decent practice to put it on the Team.

The BAC’s were Odin’s Fury and Flying Hammer.  Odin’s Fury was there for the Global in order to allow combat damage from my unblocked Infiltrate characters by removing Angela from the Field at the appropriate time.  Flying Hammer was mainly there for Overcrush protection because of the Global Ability.

This was a super late entry to the initial TOTM.  He was using the nasty Warriors Three combo (you know the one), along with the Justice League Hal Jordan to buff attackers further.  This is why I had Flying Hammer on the Team.  I got Angela and Captain Marvel out really quickly and the Infiltrate machine started to fire.  I kept the Overcrush under control by saving fists.  I had him down to 1 life and just needed to hit him one more time on the next turn.  The Dice Masters Gods laughed at me and ensured I had no fists to prevent the Overcrush and I was mauled by a gigantic field of Green Lantern pumped Warriors.

This game was against a Swarm based Team using Hela to make them Immortal.  However, the recent ruling on the keyword kind of nerfed the intended use of Hela.  It became a Batiri Beatdown Team.  Again, with the ramp engine in place, I got to an early Captain Marvel.  Eventually, Angela followed her Captain into the Field.  I was loaded with Spots and Ricochets, and doing double Infiltrate damage thanks to the Captain.  I bought Black Widow, but she did not show up.  I used the Flying Hammer Global often to keep my Infiltrate characters in the Field while blocking his big Batiris.  Eventually, I burned him to death with the double paper-cuts.

Staff of the Forgotten One + SR X-23 + R Nova Corps Uniforms = Bad Day.  I knew how this was going to go, but I wanted to see if I could get the engine running fast enough.  The pieces were bought early, but Angela did not want to play in this game.  Without her, the whole strategy fell apart.  Eventually, his pieces rolled and cleared out my Field.  I was nice enough to give his X-23 a +12A for his troubles.  Very nice OTK on his part.

Even though I had a losing record tonight, this Team was really fun to play.  I have not really played around much with Infiltrate since it first came out.  This was a really nice throwback build to the old days of Guardians of the Galaxy.  The one thing that I had forgotten about this type of Team is how ridiculous Ricochet ramp is.  You really have to watch your bag to minimize the potential bag burn.

Overall, I liked the build the way it was.  The only change that I would like to try is subbing in SR Captain America from GOTG for Black Widow.  Black Widow’s ability is really nice, but not as necessary with Captain Marvel on the Field.  Captain Marvel already gives me double the Infiltrate damage.  I think that Captain America would be a much better piece to the puzzle as it increases the Infiltrate pool of characters.

I would play this Team again in a heartbeat.

What are your thoughts on Infiltrate?  Have you played around with Captain Marvel’s ability?  Did I make good use of this MMODITB?  What changes would you make to it?  Let us know in the comments below!