Is the song stuck in your head too?  If so, you are welcome.  If not, click here.  With that business out of the way, on to the regularly scheduled article.

I have decided to play some “Farewell to Cube” Teams over the next little while to get it out of my system.  This one kind of came out of nowhere thanks to Reg from Dice Masters in the Great North who was asking about some of my spare cards.  I pulled one out and it was one I had not given a second thought about… until now.  I give you Rocket Raccoon: Halfworld Habitat. 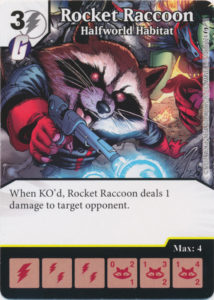 The Team:  Rocket Said Knock You Out.

I read the ability of this Rocket and thought he would shenanigan nicely with my Cosmic Cube plan.  KO Rocket over and over with a Cube active and watch the world burn around me.  Now I need to figure out how to KO the poor raccoon.  Hey, Malekith works well here.  KO Rocket for a bolt and potentially buy other actions for cheaper.  Also, while Malekith is active I can put those Cubes right back into the bag after using them.  Win-win.  What else could help out this combo?  Basorbing Man!!!  Side note:  I actually was searching Team Builder for Basorbing Man.  Thank you for that James.  Absorbing Man would copy Rocket’s when KO’ed effects, basically doubling up on everything.  That is a decent core.

Given that my win-con was KO based, I had to reach back into the archives and bring Rarecrow out for a spin to steal something good across the table.  Talisman made perfect sense to join the Team, and Malekith would make it more affordable.

That left a few slots open for some extra tech.  Mjolnir was there for the fixing Global, but could also be used for removal if necessary.  Xandala was there because I had a feeling SR Yuan-Ti was going to make her debut in our local scene.

The actions I chose were Big Entrance to reduce costs and Shocking Grasp for both removal and ramp.

Staff of the Forgotten One with lots of when fielded damage options… oh… and Switch.  I got Rocket and Absorbing Man out fairly quickly and started the paper cuts while I watched my Cubes not roll.  Switch is extremely effective at punishing action-based Teams.  Eventually, I got the Rocket/Absorbing Man/Cube combo to go off for 10 damage and the win.

SR Jubilee/Sidekick burn with a nice mix of new PXG/Mimic… oh and R Riddler.  I would rather have faced Switch.  In case you don’t know, Riddler deals your opponent (me) 1 damage when they use an Action Die.  So, my Cubes would hurt me when I used them.  Rarecrow was the plan here.  Take Riddler out of the field and do my Cube thing.  This was a good idea in principle, but when there are multiple Riddlers in the Field it does not work so well.  I took my chance with a Cube/Rocket/Absorbing Man and took the hit from Riddler.  However, I forgot about Jubilee and took a hit from her with an active Cube.  Oops.  The remaining game went as expected as Riddler kept me in check and Jubilee cut me until I could not risk the Cube damage.  No winning here.

Nobby/Manta… and… that… stupid… Switch.  Guess what?  Switch is good.  Have I mentioned that before?  I could not get a Cube to roll the entire game… and when I did, I had to reroll it and it never came back.  My papercuts were slower than his.  The only positive in this game was KO’ing my Scarecrow with my Malekith Global to take his Manta, and then KO’ing my new Manta with HIS Malekith Global to make him reroll him next turn.  Beyond that, I did not accomplish much else.

Pro-Tip:  Don’t tell your local scene know you intend to play the heck out of Cube unless you want to deal with Switch all night long.  Having said that, I could have prepared for that better by including Parallax.

Overall though, I like the core pieces of this puzzle.  Rocket/Absorbing Man/Cube is great together.  Rarecrow is always excellent on a “when KO’ed” Team.  Xandala was not really necessary on this build and was only really put in there as a contingency.  Not a bad back-up plan, but if I want to go Attune/Cube I would go all out with it.

Talisman was not really necessary here.  I would probably slide Parallax into this slot on a future version.  Mjolnir would stay and I might actually focus on buying the action next time.  Shocking Grasp failed me tonight.  I might consider Truce in another build (and this was on the short list of BAC’s for this build).  Big Entrance will get punted in future versions of this Team.  I I have a love/hate relationship with that die.  I love it early, but hate it late.  I would probably swap it out for Investigation or something along those lines to help with Ramp/Churn.

Overall, I loved playing this Team even though it did not perform exactly as I had hoped.  I definitely will put it on the list to try again another time.  Cube worked will making this KO mechanic into something much more vicious than it originally was.

Let’s see what the Cube will bring next week.

What were your thoughts on this combo?  How would you have made it even more nasty?  What other different uses of Cube do you have?  Share in the comments below.

As always, thank you for reading!