Special format this week. We break the rules!  We allowed everyone to bring two versions of the same character.

Outside of this, we had our usual casual Golden Age rules (No Bard, Thief or Oracle; you know which ones).

After finishing my team for this week, I could just picture my characters saying…

So as you can probably tell, I used the special rules to bring 2 versions of Batman. The first, Natural Leader, is an obvious and common pick for Bat-Family teams. With the amount of Bat-Family characters here, he becomes ludicrously cheap real fast. Also, don’t forget the global! With the amount of villain control floating about, it’s a nice tool to have in my utility belt. 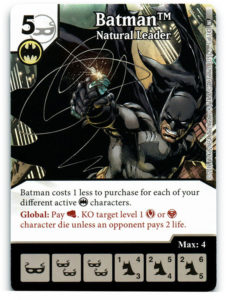 To bring him on the field, there’s a combo of three pieces: Bruce Wayne, Alfred, and Blue-Eyes White Dragon. Use Blue-Eyes’ global to KO Alfred (who will likely come back if I have a sidekick in the used pile), trigger Bruce’s ability to bring Batman straight to the field and capture an opposing character. Classic strategy, and very effective.

Where it gets interesting is with Thomas Wayne and the other Batman (which I’ll call TAS Batman). Buy Thomas Wayne, KO a Batman from Suit Up (with TAS Batman still active), trigger Bruce, field Thomas, KO an Alfred with TAS Batman’s ability, and thus trigger Bruce again, overall bringing two Batman dice on the field and removing two opposing characters. Janky, but pretty satisfying! 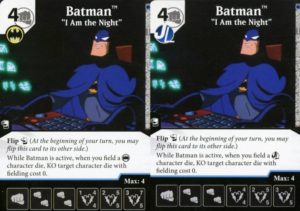 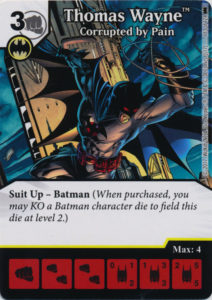 Shriek serves for blanking, and Oracle serves to counter action teams (with Master Investigator banned from our store, this one seemed like the best choice). Res serves for ramp and bag control, and Vigilante Justice serves as an alternate one-sided removal method.

I started off against a Fixit team that was trying to win without Magic Missile. Against Bat-Family, however, this strategy was not fast enough. I got the more traditional Bat-Family strategy set up, and with my opponent having few characters on the board, I managed to set up and swing in with a lot of Batmen.

This game, I was up against Jubilee + Cube. A pretty competitive team, very well set up, by a guy that forgot this was a silly tournament (we all glared, but forgave him). Despite my team being less competitive, this actually ended up being pretty close; I was one energy away from clearing his board and swinging in for lethal (or rather, I cleared his board, but he had the new PXG global to field a sidekick, and I was out of energy by that point). Then, he rolled 3 cubes, with Jubilee active, and fielded sidekicks to burn me down. He won.

This time, I went up against some Hulks. And he didn’t get one Hulk on the board all game (bad rolls). He tried to pivot to swinging in with Black Widow: Stinger, but against a team that relishes on KO’ing my own stuff…well, that didn’t go well for him. Batman and TAS Batman hit the field, I got to do the silly shenanigans with Bruce and TAS Batman to empty his board, and I managed an attack for a good 40 damage.

-With the amount of ping damage on display tonight (Jubilee, Widow…), I really wish I’d put R Commissioner Gordon (from WF) to field Batman from the Used pile when I took damage. It would’ve been a really good fit. With me hardly using Oracle all night, it would’ve been an easy swap. 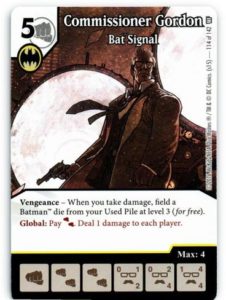 -That TAS Batman is a bit situational, but with it being legal in the new Modern, I wonder if he could be the key to make a new Bat-Family team work. Is it a long shot? Perhaps, especially without Vigilante Justice as a backup removal option. Still, with fantastic stats and a fun effect, I’ll definitely be testing him.

That silly format was fun, but not something we’ll do too often. People want to start preparing for Canadian Nationals, so I think silly formats are going to go away for a little while.