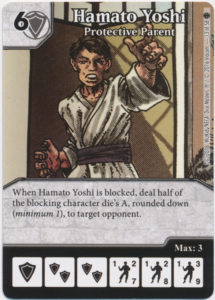 The whole point was I wanted to try out Hamato Yoshi. It was a neat ability that I felt had potential. Joker was there as a back-up plan. Kal-L was to make Yoshi a threat. Agent Venom was to make the butts bigger. Bifrost was my energy fixer. Hush was my main Ramp option, and played well with the Bat-Joker. Namorita was a cheap character with a decent ability. Blob was to deal with annoyances.

Tabaxi/Heist Burn with a good mix of Green Devil Mask and DWiz. I could not roll characters to save my life. Got a Yoshi out, but he was too slow. Jokers and Blobs did not show up. Terrible start to the night. 0-1.

Against a really cool “When KO’ed” Team using Absorbing Man. Still had trouble dealing with bad rolls. Joker was a little more effective, but when his combo went off, it was an instant kill. 0-2

Red Dragon was a big boy here. Static helped with board clear. I was determined to make Yoshi work, so I went down that poo filled road again. I did get him to deal 5 damage at one point, but that cost a fortune to make happen. Slipped some Jokers through for damage but came up short. 1-3

Yoshi does not work. I want him to, but the amount of energy required to make him effective is too high. However, Joker, Kal-L, Hush, and Agent Venom are an interesting core. I think there is a Team here, but Yoshi is not a part of it. Joker would be my next focus point with this build. I definitely plan to revisit this Team with a new focus.

2 Replies to “The Rat-Man Faileth”