Building teams centered around knocking characters out seems to be the flavor of the month here at Dice Masters North, and I ended up going with the flow.

Although I might have gotten things backwards – this team is about knocking out my opponent’s characters, not my own.

Sorry, I wasn’t able to think up a snappy name for this team. 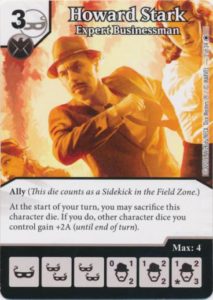 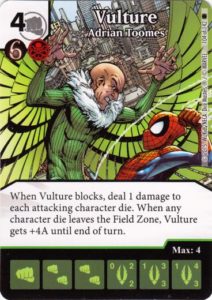 This was the final week for the current round of the local Achievement League.  My focus remained on character challenges, as opposed to gameplay or team building challenges.  Looking over the options, I decided to try and make use of Howard Stark.  Ever since I saw Howard Stark – Expert Businessman I have wanted to combine him with Vulture – Adrian Toomes.  The combination of their two abilities means Vulture gets +6A when Howard Stark is sacrificed, and I figured there had to be some way to make use of that.  The obvious answers are, of course, Overcrush, or figuring out a way to make sure he goes through unblocked.

I figured uncommon Hellfire Club might be the thing to try here.  Once Howard is sacrificed, Vulture’s attack will be a minimum of 8, so he’s probably going to have the highest A of any die in the field.  Using Hellfire Club to clear the opponent’s field allows me to deal 8-10 damage (before any buffs) depending on Vulture’s level.

But I needed something to turn that into a one turn kill, so I wouldn’t need to worry about my opponent re-rolling all the characters I just KOed and coming back through my own weakened field.  The answer for that seemed to be Iron Will, specifically the promo Colossus, a 4-cost with A of 5-6-7.  Get a Howard, a Vulture and a Colossus in the field, Sacrifice Howard, use Hellfire Club and come through the empty field for 15-19.  Just a little bit of early chip damage and/or some stat buffing should make that enough for lethal.

The tricky part is I have to sacrifice Howard Stark at the start of my turn.  So unless I have a Hellfire Club in my Prep Area, or as one of four or fewer dice in my bag, I don’t even know whether I’m going to draw it when I have to make the decision.

Enter Elf Wizard.  She potentially allows me to buy a Hellfire Club at a discount (from her ‘when fielded’) and then move that die to the Prep Area (from her ‘when attacks’).

Another potential speed bump for this team was an opponent using a Sidekick fielding global.  It’s a real nuisance when your plan involves storming through your opponent’s clear field and said field doesn’t stay clear.

Black Cat and Intellect Devourer went on the team to counter this possibility.  I chose those two because they would complete two more character challenges, even if there were a number of other options that would have made better choices for other reasons.

Iceman also wound up on the team to complete another character challenge.  The promo Colossus is a Flip card, and while he was primarily on the team for his Iron Will, his other side allowed him to give another X-men character Overcrush.  Iceman is an X-man, who starts off with decent stats and has those stats get buffed for every character I field.  A reasonable backup plan, it seemed, if an opponent brought something like the common Scarlet Witch from XFC.

I went with The Outsider as one BAC purely for the global.  I couldn’t actually use in on anybody but Vulture, but getting two more damage for one energy when I was going for a OTK sounded good to me.  The other was Resurrection – I was violating one of the standard tenets of team building (no 2-drop) and needed an easy source of Ramp.

Apparently if there’s an odd number of players and you’re the one who shows up a few minutes late you get a free win for that.

TOA Doppelganger team.  He had S.T.A.R. Labs which he used effectively to thin his bag, fielded an Overcrushing Triceratops which he left in the field.  He would then field his Doppelgangers, copy the Triceratops and attack with those Doppleganger Triceratops.  When I got enough high D characters in the field, he bought and fielded a rare Merlyn.  With no crossover character on my team, I was doomed, and two Doppelganger Merlyns and an actual Merlyn gave me the coup de grace.

Note:  I did buy an Intellect Devourer early, and it did slow down his use of S.T.A.R. Labs some, but I had difficulty getting it out of the field in order to refield it and make use of its ability.

Globalpalooza team where all ten cards had global abilities.  Used the old classic PXG / Rare Wasp combo to give himself the big ramp advantage.  He was rusty and/or overenthusiastic with classic PXG, however as he managed to give himself three points of bag burn damage on an early turn and a couple more on other turns.  He was relying on the rare Firefly to do most of his damage, but that required spending energy on Firefly’s character ability which killed his ramp, at least temporarily.  He had me down to about 7 life, with him being down to 11.  With a Level 3 Colossus (and a couple of irrelevant Sidekicks)  in the field I managed to pull and roll both Hellfire Club and a Level 3 Intellect Devourer to get the win.

Two games isn’t much of a sample size, but this team did not end up working at all like I’d originally intended.  One big factor there was that the two opponents I did play were both using S.T.A.R. Labs and my plan for dealing with something like that proved to be inadequate – If Intellect Devourer was going to be my plan for that, I needed something to get him out of the field more consistently, even if it was just a means to buff opposing Sidekicks (so blocking Intellect Devourer with them would KO Intellect Devourer).

Still, I found I really enjoyed the self-assigned task of trying to make a workable team using the unloved characters on the character challenge list in meaningful ways.

As for the League as a whole, I took the title.  I’d led most of the way, and it didn’t hurt that the second place player, who was the only one with a realistic chance of catching me, wasn’t able to make it today.

One Reply to “Hellfire Club”