This week our group did our special The Gods Must Be Crazy event.  Jourdo listed the rules in his own article – click on the link if you need a reminder.

The Team:  Harley Quinn is Crazy.

I have two or three team ideas that I’ve been meaning to try out, but given the chaotic format I didn’t want to bring any of those to this event.  So I decided to borrow a trick from Jourdo, and used the Dice Coalition Team Builder to pick a random card to try to build a team around.

The card that came up was this: 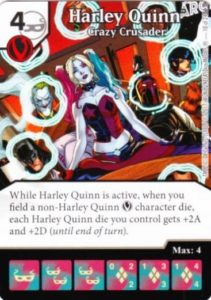 This card had never caught my attention before, but it has definite possibilities.  Field 3 Villains on a turn and she’s +6/+6.

I decided the way I was going to try and make use of that buff was with this combo: 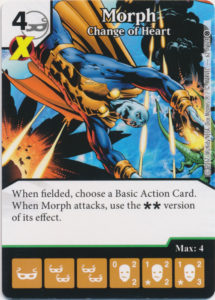 So the plan is to get Morph and a couple of Harley dice into my field.  Field more Villains to buff the Harleys, attack with Morph and the Harleys, using the former’s ability to give the Harleys Overcrush.

I added a couple of 2-cost Villains with Swarm – Kree Soldier and Foot Ninja  – intending this would give me plenty of Villains to field.  I also added Uncommon Malekith, so fielding Sidekicks would be fielding Villains.

Guardian of Faith went in as my second BAC.  The thinking was I would have it available so I could declare Harley or Morph blocked if my opponent decided to simply let them through.

Shriek was the next add.  This was primarily as a counter to Tabaxi Rogue, as I’d seen entirely too much of her (it?/him?) in the last little while – at least when the format allowed.

Vixen was essentially required given the special rules involving her.  As for Penguin – one of the Crazy Gods rolls was ‘replace all dice in the Field Zone with Penguin dice’.  I figured why not have a Penguin card on my team and take advantage of some kind of ability if that happened?

The plan for using Harley had more parts to it than was ideal for the format, but I decided to treat that as a challenge and part of the fun.

Vixen (of course), Blue Dragon, PXG, Green Devil Mask (none of which were ever bought) and I don’t remember what else except the BACs were Groombrindal’s Fury and Instant War.

For some reason I noticed he had PXG but not Instant War.  If I had I think I would have bought Instant War to mess up his bag management and PXG usage while relying on my Swarmers for my own ramp.

Even so, I thought I’d gotten off to a good start – until a Crazy Gods roll came up just as  I was about to attack for 5 damage.  The result sent all to dice in play to our bags, and had us re-roll to see who went ‘first’.  Life totals were preserved, though it didn’t mean much since neither of us had taken any damage, except that I missed dealing 5 damage because I wasn’t ~5 seconds faster.

The next Crazy Gods roll had us switch seats to play each others’ teams.

He ended up fielding a Morph while there was an active Vixen effect of ‘You can’t use action dice while your opponent has an active Vixen’ (which both of us did.)  He interpreted that to mean he couldn’t choose a BAC for Morph’s effect at that time, and I didn’t think too hard about it.  (After the game, we all concluded he should have been able to choose a BAC when fielding Morph, but he could not have used the BAC effect while Vixen was nullifying the use of action dice.)

I did a Breath Weapon attack for about 8 damage, but on his following turn all the KOed characters re-rolling combined with drawing Malekith meant he got his single Harley die up to about 20A.  Unfortunately, his only Morph die had started the turn in the field, and due to our confusion, hadn’t named a BAC for his effect – meaning no overcrush for giant Harley.

The game went to time, with Vixen gaining Breath Weapon 3 for the final turns.  Somehow, I had a brain cramp and missed that I had 3 energy and an active Vixen, which should have given me lethal.

That meant my opponent got one last turn, and he had an active Vixen and 3 energy.

So I lost, but my team won.

His Fixit-Hellfire Club combo set up much faster than my combo.  The highlight for me was unpurchasing the Fixit die he had in his Prep Area and returning it to its card (the Crazy Gods effect active at that time permitted that).  Unfortunately, that wasn’t the only one he’d bought, and I didn’t resort to Shriek soon enough, so when he drew his Hellfire Club, that was game over.

Batman:  Plays Too Rough along with the Superman who is buffed by Justice League Characters and the Firestorm whose stats get doubled when you have characters of all energy types active.

I shrieked his Batman early.  I lucked out in that when a Vixen result came up where she (i.e. Vixen) blanked all opposing characters (including Shriek) while active, his Batman didn’t have enough of a buff to get lethal.  Furthermore that result allows opponents to pay 1 to force Vixen to attack, and when it came up on my opponents turn, I had an energy in my reserve pool that I hadn’t found any use for on my turn.  Which allowed me to get his Shriek off the field.

The next ‘Crazy Gods’ result was all characters lose their affiliations.  Which was unfortunate for me, as I had a turn here where I Swarmed like crazy which should have allowed me to field a ton of Villains and buff my Harleys (I had two in the field) like crazy.  Unfortunately I forgot that my Villains had lost their affiliations, and played it as if they still had them.  By the time I’d realized my error, it was too late to retrieve the situation.

The next Crazy Gods result was all KOed characters went to the Used Pile.  With that in play he started attacking with Superman and Firestorm each turn, sometimes with Overcrush to the Raised Shields dice I’d kindly provided for him.

I bled blockers, who went to the Used Pile when KOed, and was eventually overwhelmed.

The event was interesting and a lot of fun, although not something I would want to try too often.  The Penguin dice result never came up, which was a little bit unfortunate – I would have liked to see it happen (once).

In retrospect, my piloting on the night was terrible – I was basically Launchpad McQuack.  I had multiple serious brain cramps on the night, mostly involving forgetting which Crazy Gods effect was in play at the time.  Which had a lot to do with my winless record.

As for the team, it was really interesting.  I may try it again sometime when the format isn’t quite so goofy.  Well, this team less Vixen and Penguin who were only present due to the format.

What would you replace them with?  Let us know in the comments.