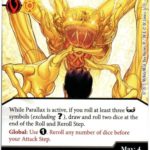 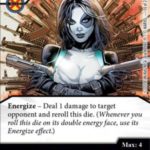 Domino: Not Really a Party Girl is usually the first card that comes to mind when the subject of Energize comes up, due to the almost unique part where her Energize ability chains – i.e. part of the effect is to re-roll the die, which can potentially trigger the Energize effect again.

Doing damage to the opponent is almost always a good thing, but Domino only does 1 point at a time, which means she can be completely nerfed by Black Widow: Agent or Mystique: Freedom Force.  Plus, outside the Roll and Reroll Step, the odds of getting a double energy face to trigger Energize effects on a given die is only one in three.  I put her on the team, but she was not going to be the main focus. 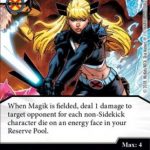 While looking at the Energize abilities on some of the X-men cards I happened to notice Magik: Limbo Control.  When she’s fielded, she does damage to the opponent in an amount equal to the number of non-Sidekick character dice on an energy face in my Reserve Pool.

So, if I can arrange things so that I’m fielding multiple Magik dice where I have a lot of non-Sidekick dice in my Reserve Pool, that can potentially add up to a lot of damage.

Other pieces on the team included Clayface (for the global), Kitty Pryde: More Human Than You! (gives a discount on buying X-men when fielded), Black Widow: Widow’s Hunt ( the Rare from Infinity Gauntlet, with an Energize effect that allows me to spin down opposing characters, or spin them to energy from Level 1), and Phoenix: Firepower (does 3 damage to target character die when fielded, plus an Energize effect which deals 2 damage to target character die or player.)

That Phoenix is a 6-cost, but with Kitty Pryde and/or Ebony Maw (the last non-BAC on the team) she might be reachable.

The Ebony Maw I included was the Rare, which has a ‘when fielded’ ability that allows me to reroll an opposing character die, plus she does for all dice what Kitty Pryde does for X-men.  Of course, Ebony Maw is a 5-cost where Kitty Pryde is a 3.

I expected to need some turns where I would be rolling a lot of dice (to use with the Parallax global) to succeed with this team.  So I went with Investigative Journalism and Daily Planet as my BACs, hoping they would be able to give me such turns.

Up against a combination of Rare Spider-Man from Infinity Gauntlet and the Team Up BAC from Superman/Wonder Woman.  Which is an absolute brutal combo.

My clock got cleaned fairly quickly.

Up against a SR Mary Shazam team with a bolt pump global and the Techno from Justice Like Lightning with the global for spinning Sidekick dice (as many as you like) to their bolt face.

Before Mary came around for a second go, I was able to field two Magik dice, which both came out on Level 3.  Down side:  Level 3 is the one level where I actually had to pay a fielding cost for her.  Upside: Magik has 7D on Level 3.  So when Mary came calling with 16A and Overcrush, it wasn’t a big deal, as the two Magik dice and a Kitty Pryde die were able to prevent any damge from going through, and KO Mary (whose D isn’t buffed when her A is).

The two Magik dice were KO’d and I drew two others in my next draw.  Two of them came up energy, two of them came up characters.  I also had another non-Sidekick character die on an energy face.  His field was empty, and with the six burn damage from fielding the Magiks, I was able to finish him off with combat damage.

It was a low turnout, so I only played the two games.  It’s hard to reach any definitive conclusions with such a small sample size.  It’s clearly not as fast as the Spider-Man/Team Up team, but I doubt many teams are (since that team is disgusting).  It was fun to play, but I don’t think it’s a great team.  There’s a part of my brain that is nearly certain that you must be able to get something useful by pairing Parallax with Energize, but I’m still trying to figure out what that might be.

If you have an idea, let us know in the comments below, or on our Socials (@dmNorthTV), or join the conversation on our Discord.