A little while ago, jourdo built a UC Mjolnir team (inspired by Chris Clubb’s team from the CR Game Room invitational). I was hoping to have a go with it too, but didn’t feel like copying his build. And now, one of the cards from the new X-men set is giving me a chance to…

Forge my own path

Ok, the combo is extremely simple in theory, but hard to use in practice. The idea is to use two Forge dice, trigger Energize on both, and reduce my action dice’s purchase cost by 4. Thus, I can buy up all of my Mjolnirs for 1 energy each. Heck, I can just use the 4 bolts from my two Forge dice and buy up four Mjolnirs that way! 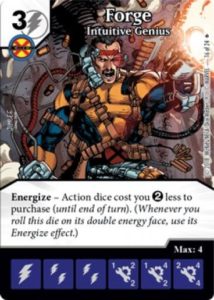 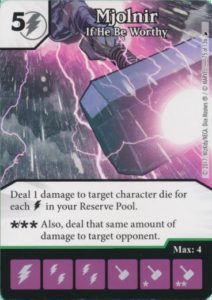 Ok, so there are two obvious issues: I need bolts, and I need a way to deal with the ludicrous amount of dice I intend to purchase. For bolts, I went with Techno. He’s there for the global, to convert all sidekicks into bolts and thus massively increase Mjolnir’s damage. As for the bag control issue, I wanted to try Atlantis. One of my locals was using him with Green Lantern not long ago, and I wanted to give it a go. 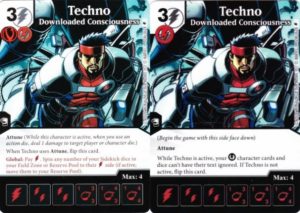 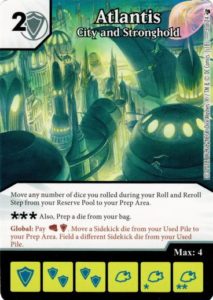 What if Scarlet Witch shows up, though? I decided to put in Pyro as a backup plan, alongside Energy Field. Pyro also converts bolts to damage, so he’s a logical secondary strategy to include here. This led me to include Storm as removal; removal is key if ever you want to use Pyro, as he’s quite vulnerable to Shriek and Bishop. And even with no Pyro, Storm + Energy Field is fantastic removal in its own right. 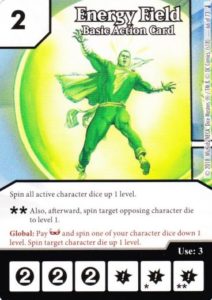 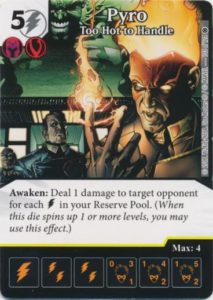 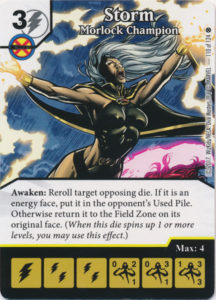 As for the rest of the team, Scarlet Witch is there because there’s a lot of actions in my local meta, Resurrection is there for ramp and churn, and Billy Club is there for the global, to help use Energy Field if I go for my backup plan.

I started off against a team based around C Yuan-ti and Parasite, relying on rolling Thrown Brick to make Yuan-ti unblockable. I did a big mistake on that one, and bought some of his Thrown Bricks. It slowed me down considerably. I also made the mistake of not buying Storm; she would’ve been fantastic to slow down his Yuan-ti rush. I did get to buy 2 Forge dice, trigger Energize on both, and load up on Mjolnirs, but by that point my bag was unmanageable. Add to that the fact that Atlantis wouldn’t roll, and…yeah, I wasn’t setting myself up for success. He eventually ran me over with Yuan-ti and Parasite. Only have myself to blame for this one.

Next up, I went up against Dragons. As my opponent had the more aggressive strategy, I went for more defensive pieces, namely Storm and Scarlet Witch. Both played their parts and slowed my opponent’s offence to a crawl. Storm + Energy Field kept my opponent’s field nearly empty (that Storm gets really hard to play against with Energy Field). When I finally got the double Forge into 1-cost Mjolnirs to happen, my opponent conceded, seeing he had functionally no way to get back into the game. So I won.

Next up, I faced off against an X-men team based strongly around the new team packs. Dani, Deadpool, Mimic…this time, I tried to go for my Mjolnirs early, but some funky Forge rolls stopped me from getting the combo to fire off. I only ended up buying 2 Mjolnirs, but that actually worked out well; I had a major turn where I rolled both Mjolnirs on burst, alongside 6 sidekicks and 6 bolts from non-sidekicks. A Techno global later, that’s 11 bolts, so 22 damage from the two Mjolnirs. Ok, slow start, but things are looking up!

And now, I go up against a team based around the new Iceman. With Chwingas, Magic Missile, etc…pretty straightforward strategy. Interestingly enough, we both brought cards that helped the other out. His Clayface, in particular, was quite useful. His strategy relied on far less moving pieces, and it led to consistent early damage. I was going for the one big swing of damage, and at one point, I had 14 damage on the board! But that would’ve wrecked my ramp. So I used Atlantis to set up for what would’ve definitely been lethal damage the next turn (we even tested it out for fun after, and yes, I would’ve won). But he got Iceman out, tons of bolts, and dealt lethal damage to me that way. He won. Looking back on this, I should’ve kept bolts in my reserve pool to hit his Iceman before the attack step (to diminish the potential damage). That might have slowed him down somewhat. Bah, that was a misplay on my end. In the end, he won, but it was close!

-This team has one big, glaring, obvious problem: bag control. Way too many dice going around my bag (2 Forge, up to 4 Mjolnirs, etc). And the card I was hoping would stop this problem (Atlantis) ended up rolling energy…and clogging my bag further. You could say that was bad luck, but any team should be built with this possibility in mind. Perhaps Mimic ramp would’ve been a better fit for this strategy.

-I went out of my way to avoid using Pyro because I was hoping to focus on my main strategy. Pyro would likely have been far more consistent than Mjolnir though.

-Atlantis…is a weird one. I should’ve seen this coming, but using it alongside other non-continuous actions means that I don’t draw it when I need it, and even when I do get it when needed, it’s exponentially harder to recover from a missed roll. When I use that Atlantis in the future, I won’t use it with an action-based win condition.

-That Storm, alongside Energy Field, is just dirty pool; that’s one mask for an automatic 50/50 chance to remove a die, with no need to field anything other than Storm (as long as she’s not level 1 of course). Don’t be surprised if you see her used at a major competitive level.

-Trying to trigger Energize on two separate dice on the same turn is a bit of a pain. It worked for me twice during the whole evening. Not a very reliable strategy, to put it lightly. But it felt awesome when it would fire off.

I’m scratching my head as to whether Forge is worth it competitively now. This team wasn’t a home-run, but could it be worth it to just buy one Forge and stock up on a ton of Power Bolts and Magic Missiles? I’ll need to revisit this later.

4 Replies to “Forge my own path”