Every once in a while, I like to take a terrible card (or at least one with a terrible reputation) and see if I can do something to make it usable.  This week, it was The Flash’s turn in the barrel.  Specifically, this card: 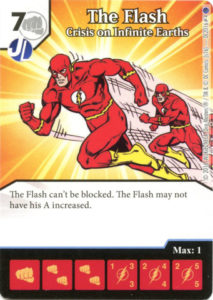 Unblockable is a strong ability, but not being able to increase his A is a serious handicap.  The options here seemed to be blank him, then buff him (in the attack step) or figure how to cycle him rapidly.  I decided to go blank and buff.

The key support card was the common Flying Car from the Deadpool set: 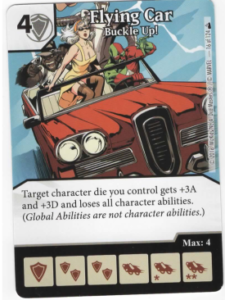 So, attack with Flash, then target him with Flying Car.  The 3A/3D buff happens first, except the A buff fails due to Flash’s card text.  Then, the second part of Flying Car happens and Flash is now blank, so I can now flip his A and D.

So, how else to buff Flash’s D before the flip?  Uncommon Vibranium Shield from CW, of course.  Flesh Golem has Fabricate 2-3, so let’s use that to trigger the KOs. Ant-Man serves a dual purpose:  we need a stat flipper global, and pairing an Ant-Man die with a sidekick is excellent fuel for Fabricating Flesh Golems.

With multiple action dice on the team, putting a BFF Red Dragon on the team for the global seemed like a good idea.

That’s six card slots taken, and I still hadn’t addressed how I was going to ramp up to buy the 7-cost Flash die.  I decided to go Ring/Res/Cake, deciding both of my BACs and one other slot.

Ring/Res is a well known tactic where a player uses the (FUS) Ring and Resurrection globals to control what he has in his bag and Prep Area for his Turn 3 draw.  It does limit the player to spending no more than 3 energy on character or action dice on each of the first two turns, but ensures both of those 3 costs are available to them on Turn 3.

Normally, after Turn 2, Ring/Res leaves a player with 4 dice in his bag and 1 in his Prep Area, with those 5 dice being two 3-costs and 3 Sidekick dice.  So after drawing for Turn 3, his bag will be empty.

Which is not actually ideal when combining it with Cake (or, as it’s officially known, the Create Food and Water basic action).  I can use the Cake global to trigger a bag refill before using the Cake action, but that means I’m prepping one less die.  If I have the option of leaving a Sidekick die in the field on Turn 1, or using the Cake global on my opponent’s turn (between my Turns 2 and 3) so I trigger a bag refill as part of my Turn 3 Clear and Draw, I’m looking to take it.  That means I might be able to prep as many as 5 Sidekick dice using Cake on Turn 3.   Which means the plan is to buy The Flash on Turn 4.

That leaves one card slot still open.  After much dithering, where I considered Agent Venom for his D-buff global, Free Chimichangas for their D-buff Impulse ability, and the Gorilla Grodd energy fixer, I finally opted for uncommon Acererak for his global, which allows you to re-roll an action die once per turn.  A little bit of a safety cushion for my action dice heavy team.

This was against a Titans team, supported by the rare AOU Wasp.  I made a couple of mistakes this game:  I bought Flying Car too early, and I sent Flash through unbuffed for a small amount of damage instead of waiting to set up the combo.

He was running Resurrection as well, and making better use of Cake than I was.  With his Wasp impeding my ability to use globals, that gave him a serious ramp advantage.

He got his SR Starfire out, which hit me for 6 damage total, as I let it through.  On my next turn I had 6 dice in my bag, including Flying Car.  There were enough other dice in his Used Pile that it was basically a coin flip on whether he’d be able to draw his Starfire die on his next turn.  I opted to double Resurrect, taking 2 damage from Wasp to take me down to 6 life, so I’d be guaranteed to get Flying Car on my next turn, and cross my fingers that he wouldn’t draw his Starfire.

My hopes were dashed – he drew that Starfire and fielded her, bought a second Starfire and swapped her in with Misdirection, then attacked with the two of them for 3 abiilty damage each giving him the win.

One of the things I remember best about this game is actually having an ‘I’m such an idiot’ moment.  I used the Cake global on my opponent’s turn (before what turned out to be my last turn) to trigger a bag refill.  That put five sidekick dice and a Cake die in the bag.  My thinking at that moment, which was flawed, was that if I pulled the Cake die I could put it in the used pile, maximizing the number of sidekick dice I’d draw on my next turn.  Unlike basic action dice, Sidekick dice have ‘?’ and ‘fist’ faces, and I’d need one of those in order to flip Flash’s A and D.

When I drew a Sidekick die, I opted to return it to the bag.  On my initial roll the next turn, I got no fists or ‘?’s – and that’s when I realized the smart thing to do would have been to leave the Sidekick die I’d drawn with the Cake global in the Used Pile, to be targeted by the Ring global.  I got a ‘?’ on the re-roll and fired off the combo for 15 damage which was enough to give me the win – and I’d belatedly realized that the Cake and Ring globals had another kind of synergy.

This was against a Dragons team, although what I seem to remember my opponent buying was one Silver Dragon and all three of his Magic Missile dice.

I hit a bit of a glitch on Turn 2 in this game.  My initial roll was two shields and two sidekicks.  I rerolled everything but one shield and wound up with one mask and two more sidekicks to go with the shield.  Which meant I couldn’t buy anything that turn.  I used the Ring global to replace the mask with a bolt, used the shield for the Resurrection global, used the magic missile global to KO his single sidekick and attacked with three sidekicks total – one I had in the field from Turn 1 and the two I was stuck with from this turn.  I’d have much rather bought a Vibranium Shield or an Ant-Man die at that point, but sometimes life leaves you stuck making lemonade.  Fortunately, I had bought a Cake die on Turn 1, so I was able to buy Flash on schedule.

Eventually we got to the point where I had a Level 3 Flash, an Ant-Man, two sidekicks and a Vibranium Shield die in my field.  I was at 7 life, he was at 15.  I KOed Ant-Man and a sidekick to Fabricate a Flesh Golem, KOed the other sidekick with the Magice Missile global, attacked with Flash and flipped his stats for 14 damage.  I couldn’t for the life of me figure out how to get that last point of damage on that turn.

He drew three sidekick die and one Magic Missile die on his next turn.  As he had nothing but a sidekick or two in his field, that wasn’t enough to finish me off.  I went the cheesy route with the Red Dragon global and buying an action die for the win on my next turn.

I don’t expect to ever revisit this team.  Yes, apparently you can make Flash – Crisis on Infinite Earths usable, but if you’re ramping up to buy a 7-cost, there are better options to have on the team in the first place.  And there are other cheaper unblockable characters if you want that to be the focus of the team.  The unblockable ability in question is ususally conditional (e.g. attacking alone) but meeting the condition is seldom a serious problem.

Playing that card was something of a metaphorical itch I needed to scratch, but now it’s been done, and I won’t need to do it again.

The synergy between Flash COIE and Flying Car – Buckle Up is interesting in that the ‘negative’ part of Flying Car’s ability cancels out the negative part of Flash’s ability and makes him workable.  In mathematics, multiplying two negatives  (numbers, that is) gives you a positive, but it’s pretty rare to get a similar result in Dice Masters.

The one part of this team I probably will revisit is Ring/Res/Cake.  It routinely allowed me to buy and Prep a 7-cost on Turn 4, which isn’t too shabby.  The down side of it is everything important about it is available to your opponent.  Of course, if you’re opponent’s team relies on a 7-cost and he hasn’t brought his own ramp to begin with, he’s probably not going to be much of a challenge.

Have you found a different way to make Flash – Crisis on Infinite Earths work?  Or another interesting use for Flying Car – Buckle Up?  If so, please let us know in the comments.

Hope you enjoyed, and happy rolling!