I’m now the proud owner of a couple of WWE Team Packs, even if I had to resort to mail order to get them.  After looking them over, I decided the first thing I’d try with them was using the Tag Out keyword.

The Team:  Tag Out Team.

After blockers are assigned, any die with Tag Out can be Prepped to give a target character die +2A and +2D.  So, buffing and Prep in a single package, albeit at the cost of leaving one less character die in your Field Zone.

It seemed like I had a choice between unblockable and Overcrush to get in my combat damage.  I decided to go the unblockable route, specifically Insect Plague and an Ally.

The Ally in question?  The 2-cost Wong.  He has Fast as well as Ally, but the reason I chose him was the cost.  I’m going to need to hit my opponent multiple times, even with Tag Out buffs, to get to 20 damage.  That meant cheaper was better.

What’s my plan for 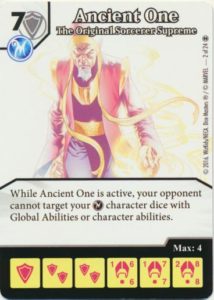 dealing with the Static Field global if it shows up?  I’m trying to find other options that Wonder Woman: Child of Clay.  This week, I went way off the beaten path and opted for Ancient One; The Original Sorcerer Supreme.  Wong is a Mystic, so if Ancient One is active he will protect Wong from being targeted by either global or character abilities used by my opponent.

Ancient One is a 7-cost, so I hedged my bets and included the Shield BAC from Trouble in Waterdeep as an alternative plan.

So, which Tag Out characters to use?  Even though I only have the team packs I had my choice of six.  Two of them only had the Tag Out keyword as their ability, so I scratched them as too plain and boring.  I also opted to forego Kofi Kingston and his Regenerate ability, as well as Trish Stratus.  Trish Stratus was the only choice who wasn’t a crossover character, and has a powerful ability – preventing a target opponent character from blocking when she attacks.  Her card also has a damage prevention global ability which I decided I didn’t want to provide to my opponents.

That left me Seth R 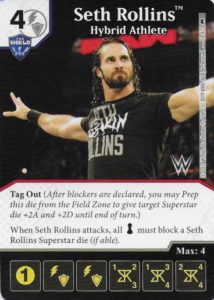 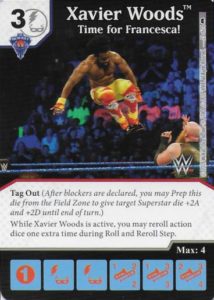 ollins: Hybrid Athlete and Xavier Woods: Time For Francesca!  The former can suck up opposing Sidekick dice when he attacks, and the latter allows me to roll action dice an extra time in the Roll and Reroll Step.  Both potentially useful.  Especially since I’m going to include Yawning Portal on the team.  So with Xavier active, I’ll get three chances to roll the action face.

Because Seth and Xavier are both crossover dice, I included one of the new Intellect Devourer cards for the energy fixer global.  Because they’re crossover, I’m still going to have to pay 2 energy to buy either, regardless of either, but with Intellect Devourer it’s going to be a lot easier to have it be the right 2 energy.

One of the last two character slots went to a Supreme Intelligence card.  Strictly for the global, so I could move Wongs and Portals from Used to Prep if I felt the need.

My last slot went to Cle 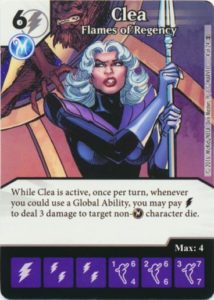 a: Flames of Regency.  I’ve used her in the past, if not extensively, and have found her to be a very useful removal engine in the right circumstances.

So the basic plan is to buy Wongs, Seths, and Xaviers.  Use the Insect Plague global on Wong, and buff him by using Tag Out.

A Level 3 Wong who has been tagged out twice would hit for 8.  So 2-4 hits from a sufficiently buffed Wong should be enough to get me to 20 damage.

So how did the team work against live opposition?

I tried to win a race to 20 damage against someone using uninterrupted Mimic ramp.  Which, in retrospect, was a mistake, even if I did have him down to 3 life by the end of the game.

With the advantage of hindsight I think I should have gone for Clea early, and used her ability to ping out Mimics, Jubilees, and possibly some Level 1 or 2 Charlotte Flairs.

I think it would have at least made him work harder for the win.

This was againt the group’s resident youngster.  Who, these days is paying more attention to her tablet than the Dice Masters game.  Consequently, I’ve stopped taking my foot off the gas pedal when matched against her.

She was running more or less her usual team – Scarecrow, Poison Ivy, Clayface, Black Manta, although she’d swapped out Mystique for one of the Professor X cards from X-Men Forever.  I ended up using the global on it more that she did.

I took 3 damage early when she attacked with a wave of Sidekicks that I couldn’t find sufficient blockers for.  I bought both my Xaviers and both my Seths early, then started buying Wongs.

Nothing special on my side.  Wongs, Seths and Xaviers, sped up by Yawning Portal.  Insect Plague global to make Wong unblockable, and steadily drain my opponent’s life total.

I’m not sure what my opponents plan was, because my team was faster than his.  On his last turn he used a Transfer Power action die to field a Hope, copying Namor and hitting me with 3 unblockable Hopes for 8 damage.  But this was really just so he could get some damage in, as he was expecting me to get lethal on my next turn. 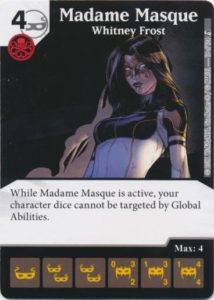 ng part on Tag Out is fairly powerful.  If you have one attacker who is doing damage, you can increase that damage by 2 for each available Tag Out die.  And as this is not a global ability, you can use something like common Madame Masque to prevent your characters from being targeted by Static Field while still increasing their A.

I’m not prepared to say at this time how pervasive Tag Out is going to become, but I’m pretty sure it’s going to see more use than Frag or even Cleave ever did.