However… Today was not that day, but I feel there is something here.  I am convinced that Black Adam can work.

You may recall Gord’s recent article where he built around the Rare Black Adam using Deadly.  His big complaint was needing to use three 4 cost characters (at least) to make it work.  I figured “to hell with that” and decided to throw a 7 cost into the mix. 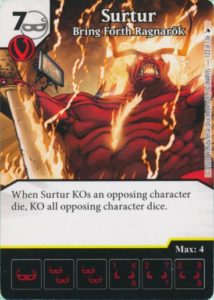 Black Adam was the centrepiece and the main Ability that I wanted to use tonight.  There are lots of different board clearing options in the game, but I decided that I wanted to try using this Big Boy.  Surtur will kill basically everything with one single KO.  That is not hard to pull off.  Bane served as the vehicle that would draw things into Surtur because of his Global.  Now a “Force Attack” Global is a double edged sword as it can be used against me to remove annoyances on my side of the table as well.  Enter Madame Masque.  No Globals can touch my characters.  So, Adam, Surtur, and Masque were the core.  Now for the accessories.

The Ring of Winter was there to make Surtur easier to purchase.  That was it.  Heimdall was there for Ramp, and I still am trying to get the hang of using his Global.  Billy Club was alternate “ramp” and a removal tool all in one.  Iron Fist was there because annoying ping damage (AOU Wasp) is pretty popular around these parts, and I am fairly Global dependant here.

Villainous Pact was chosen for Ramp, and an alternate win-con as my core was made up of Villains.  Archnemesis was used as another engine to use Surtur’s ability.

Let’s see how it ran…

There was a plethora of win-cons on this Team, but I mainly faced UC Grodd.  He was using Mimic Ramp to get to his big characters.  I purchased Surtur on turn two, but never managed to get Adam out… even after resorting to buying a second one.  I made two big mistakes in this game.  1.  I forgot Beta Ray Bill’s ability to only take 2 damage and messed up a potential board clear as a result, and 2. I KO’ed his Mimic when I did not have Lethal.  #2 proved to be my undoing, as he came back along with Grodd and Bill to be beefy AF.  I didn’t even bother blocking as it didn’t make a difference with the Overcrush damage.

This one was against a Hush Ramp engine that had a few different options for hurting you.  Dick Grayson proved to be the biggest issue (speaking of cards that never really had their day… how did Dick Grayson not get used more?).  Again, I managed a turn 2 Surtur purchase.  However, I could not roll characters to save my life.  I believe I was down to about 9 before I got my first guy out.  I eventually got the Trinity out, and started to manage the board a bit, but not getting my attack high enough for lethal.  Eventually Dick hit the board and he hits you whether you block him or not.  I could not stop the damage.  However, I got a couple of Adam pings in because he wanted to keep his Hush dice.  Small victory here.

This was a bit of a mish-mash Team that used “When KO’ed” abilities from FUS Blink Dog, good old Starter BEWD, some Batari, and the Promo Squirrel Girl.  There were some other things, but those were what I saw played.  Again, turn 2 Surtur was purchased.  Tokens proved to be the big problem in this game.  We did not know if Surtur’s ability would KO them as the are technically “not dice”.    We played it as it didn’t, and maybe that is wrong… if you know for sure, please post it in the comments.  I was able to get the Trinity out and started the Adam burn.  I got him down to 7 and could have stomped through on many occasions if it were not for the Tokens remaining behind.  It came down to his last turn and he went all in.  He rolled his KO’ed Blink Dogs to burn me enough to get lethal.

So, not the strongest night in the win department.  However, I think there is something here.  When Adam was out with his friends, he was getting some damage through.  This was not actually that hard to do… with the exception of terrible rolls.  I think Wonder Woman would have been a better choice over Masque as there were some times when my opponent had a pump Global that I could not make use of.

Bane was really good here, but I would like to try this same Team with a force block instead.  I had the idea that it this could be much more fun with a Rare Cube.  It would also make people think twice about taking the small amount of damage.

I did not purchase Iron Fist much of the night and in that last game he would have been helpful.  I didn’t really catch that until it was too late.  Oh well.

Some final thoughts:  Heimdall is not effective ramp (for me anyways).  I could not line it up more than twice all night.  It “should” be good, but it just does not seem to work in my hands.  Also, 7 cost characters are not much of a stretch to purchase anymore.

This is a great little “combo” build to try out.  It is definitely not fast, but it is effective to start board clearing.  I just needed to wait for more offence on the board before I went for the clearing.

So… How can you make Adam work?  The ability is just too much fun NOT to play with it.  Have you had success building around making your opponent unpurchase their characters?  What about this whole token thing?  Are they immune to anything that affects dice?  Share your thoughts in the comments below.

One Reply to “Every Dog Has Its Day”