To mix things up, we’ve decided to run a little legacy league. Now, others have done events like this before, but the rules vary by store. The way we decided to make this work is that for starters, all Golden Age cards are legal at the beginning, save for:

After each week, all characters and non-basic actions of the winning team are banned. (We decided to exempt basic actions)

Seeing as the rules were done kind of last minute, though, I didn’t have time to brew something new; I thus decided to bring a team I brewed a while back…

For those of you following CR Game Room, you may be wondering: Wait, isn’t this one of jourdo’s teams from the Golden Age Two-Team Takedown? Yes, yes it is. Fun fact, though: I was the one who originally built it. I was going to run it in that tournament, but when I decided not to, jourdo decided to run Jubby. Judging by his top 8 result, he did quite well with it too!

The team is based on having multiple, top-level threats that are difficult to deal with. The 3 main pieces are Gobby, Jubilee (these two are the reason for this team’s name) and Foot Ninja. Three win conditions, relying on completely different triggers, each of which can win the game on their own. Since each relies on a completely different approach (when fielded effect vs combat damage vs while active effect), shutting everything down is extremely difficult for my opponent. 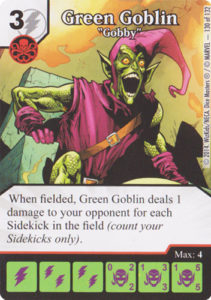 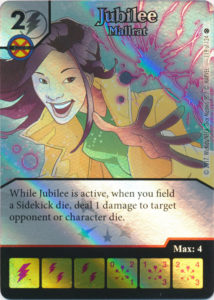 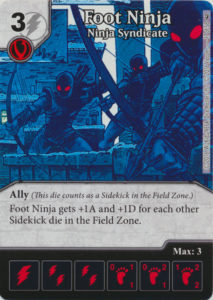 Three win conditions, though, means that each needs some support to help make it work. For Foot Ninja, I added Insect Plague, since the global makes my (potentially huge) Foot Ninja dice unblockable. I decided to add R Cube to help Jubilee work, dealing 3 damage per sidekick I field (gets out of control real fast). As for Gobby, of course, I added Parallax. Parallax’s global allows me to get Gobby off and on the field to keep triggering his ability. Parallax + Gobby teams hit so darn hard!

Adding Parallax also gave me a chance to do what I call a “Reverse-Gobby” with Jubilee and Cube; I can use Parallax to get my sidekicks off the field, and to reroll them again to field them again to burn my opponent with Jubilee. Messed up? Yes. But oh so fun.

As for the rest of the team, Hellblazer was my main control piece here. Prismatic Spray was there strictly to troll PXG and to deal with any heavy control teams, Resurrection’s global serves for ramp and churn, and Chalkboard’s global is there to set up whatever win condition I want when I want it.

On PXG: I expected big-time Golden Age teams, and if anyone runs PXG against this, I can get tons of dice (and thus generally tons of damage), real fast. I didn’t want to make a team people would badly hate, though, so I chose not to run PXG myself. This resulted in a team that big teams would hate, but if you don’t bring me PXG, it’s not going to be the quickest team. I thought this would make for a more balanced and fun evening.

I started off against Dragons. This team used Silver Dragon and Half-Dragon to discount dragons by 4(!) Buying discount dragons and using Ring of Winter = tons of massive characters. Between my low toughness characters and some unfortunate rolls, this was a nasty matchup for me. My only hope was to rush her with Jubilee + Cube, but when I rolled Cube, I’d roll no sidekicks. When I’d roll sidekicks, no Cube. Ugh…Eventually, she managed to steamroll me with an army of dragons. She won. (and eventually, she won the whole tournament!)

For my second game of the evening, I went up against a Deadpool team. Yes, seriously. That team was going for laughs, which I can respect. However, this was a lopsided matchup. This time, Jubilee rolled alongside tons of sidekicks and a Cube. I did the reverse-Gobby trick for tons of damage, set up a Cube the next turn, and got the last few points of burn in. I won.

I finished the evening against Thunderbolts + Villains. I saw Nobby and Shriek on the other side, so Hellblazer was my first purchase. My opponent’s team also had some decent removal, and me having Jubilee and Hellblazer on the field made for some tough decisions on his end. Eventually, Jubilee + Cube rolled, Foot Ninja swung in, Gobby made an appearance…a bit of damage from everything, and (since Nobby was neutralized) I managed to outpace his damage for the win.

-With none of the other people bringing obvious mega Golden Age teams, I didn’t get to take advantage of anyone’s ramp. That’s mildly annoying, but even without ramp, this team still managed to get some heavy damage in (which shouldn’t be surprising). Ramp would’ve still been really helpful though.

-Hellblazer is still awesome. Not only is he awesome control for a 2-cost, but I like how balanced he is. You can’t stop everything at once, so if your opponent plans well, you can be forced to choose between Shriek and Nobby. These kinds of choices bring strategy and challenge, which I appreciate.

-The Swiss Army Knife aspect of this team really helped once my opponents bought control. Choosing what to stop was definitely making their life difficult.

-More allies would’ve made this team even more difficult to deal with. There’s definitely room to make this team into a bigger threat.

I like this team a fair bit, and there’s a lot to build from here. I won’t run this next week though; banned or not, I’m switching to some old-school fun. And with Green Devil Mask banned now (yes!), time for some shenanigans.