Tonights build was fully inspired by one Charlotte’s Teams she is playing in the Golden Age Two Team Takedown. 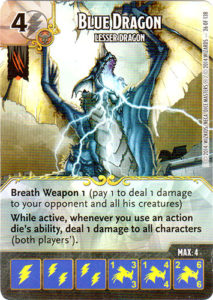 This is the Team for those that are not following the Tournament.  I had the chance to play against it and was really impressed with the Blue Dragon/Staff synergy.  Use the Staff while Blue Dragon is out and KO the opposing Field without needing Breath Weapon to do the dirty work.  Then swing in with all sorts of nastiness and you win.

She used the Ring of Winter to make the Dragons beefier and in the Field faster.  Mister Miracle was to keep the actions cycling with Boomerang.  Bard was the heavy hitter to just make your opponent’s life miserable.

I wanted to focus more on the Dragons in this build so I made a few tweaks.  Blue Dragon and Staff would be the focus of the build and we would see where we would go from there.

Much of the core of Charlotte’s build is still in place.  Resurrection was kept for the Ramp.  The Ring of Winter is a must have in order to get the Dragon machine going as fast as possible.  Blue-Eyes was kept for the Global to make things cheaper, but would qualify as a Dragon for Ring of Winter if necessary.  Gold Dragon is a nice beefy Dragon and Attune is pretty good too.  You will notice I cleverly switched out to a different Blue Dragon.  Why you ask?  Well, because I grabbed the wrong one out of the binder and did not notice until my second game… Oops.

The rest of the build went a different direction (intentionally this time).  I thought that rolling Ring and Staff were key to the win condition, so Rip Hunter took away the chance aspect of that.  Use him early to guarantee my Ring and then Blue-Eyes him out to re-field and do it again for Staff.  He would save me from potential Switchy issues.  Red Dragon was put in place for the Global and to give me one more Dragon on the Team (because you can never have enough).  Merlyn was the final add in mostly for the bolt fixing Global, but also as a back-up win condition if things went to total crap (although, I would probably be dead by then).

Released From The Ice was chosen as the second action as it has a decent ability to move things from Used to Prep, but was also an alternate 2 cost.

With the plan in place, let’s see how it ran.

This first game was against our newer younger player with her mish-mash Team from previous weeks.  I really did not want to go full speed here.  I bought Blue Dragons for full price.  Used the Ring to bring them in.  Eventually had a Field with 4 Blue Dragons and a Gold Dragon (all top level).  All she had was a Sidekick.  I really did not have a choice but to attack.  I felt a little bad.

This time I was matched up against the other Guardians Team from last week, with some tweaks.  After Ring and an early Blue Dragon, I went for Rip.  He did what he needed to and kept the Ring coming and with it Dragons.  I built up my field big enough that when Staff finally showed up, it was game over.  It was at that exact moment that I realized that I brought the wrong Blue Dragon.

This was meant to be an Obelisk Team, but the rolls never let my opponent go that way.  They focused on paper cuts from UC Kate Bishop while trying to work their way over to the big guy.  My rolls were not cooperating as much in this game.  I decided to try without Rip and had difficulty getting my Blue Dragon army going.  I seemed to have no trouble getting my Gold Dragons out though.  I eventually filled the field with two Gold Dragons and one Blue Dragon and used Breath Weapon to clear out everyone else.

I have used Ring of Winter before, but I keep forgetting how amazing it is on a Dragon Team.  When it hit, I was able to get some nasty beasts out fast.  Blue Dragon (even though it was the wrong one) worked well with Staff, and still provided the board clear necessary for getting the win.  All of the other pieces worked as you would expect them to.

Rip Hunter is one of those cards I keep looking at and hardly ever use.  Tonight, he was worth it.  With the threat of Switch out there, he was a perfect counter piece to have on a Team that really needed actions to roll properly.

This was a fun Team to run, and I would run it again in a heartbeat.  I love Dragons and the Ring of Winter has made them so much better.

Thanks again Charlotte for the inspiration for this one!

… and thank you for reading!

P.S.  Laurier wanted me to let you all know he will be missing his article this week.  As you may or may not know, the part of the Country he is in got hit by some tornadoes and the recovery process is still going on.  This week’s DM event had to be cancelled due to some local players being unable to go into their homes after the tornadoes. He will be back next week with more dice wizardry.

Edited to fix a minor point in the P.S. By the way, that’s six tornadoes we got. Yeah, pretty crazy. I’m alright though.  -Laurier

2 Replies to “Dragons and Staffs and Rings… Oh My!”