Back in the very early days of Dice Masters, like only AvX was out early, there was a deck that came to be known as Magic Machine Gun.  It was all about these two cards: 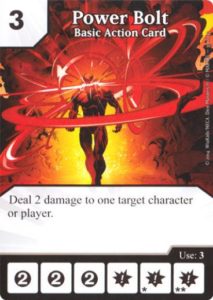 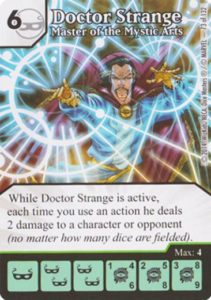 Getting to a 6-cost wasn’t the easiest in a pre-PXG era, but the basic strategy is obvious:  Get Doc out, buy Power Bolts, deal 4 damage total each time you use one.  Do it five times and your opponent is dead.

Now, there have been a lot of cards released since then, including this one: 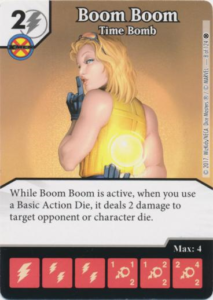 And, she’s even Modern Legal!  (As is Power Bolt, due to the existence of the OP Power Bolt card).

Boom Boom is a lot cheaper than Doctor Strange, although her weaker D means she’s more susceptible to removal by damage.

My team idea for this week did not start out with the idea of resurrecting a Machine Gun team.  It was a Golden Age Unlimited Constructed event and what I wanted to do was see if I could make some use out of this combo: 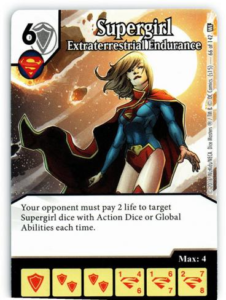 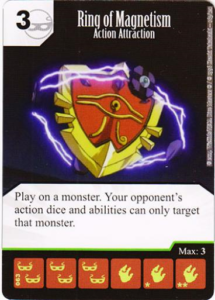 I hadn’t tried using the Supergirl/Ring of Magnetism combo since before the Superman/Wonder Woman starter set was released,  I wanted to see how it worked when I had Jimmy Olsen-Signal Watch available to mitigate Supergirl’s purchase and fielding costs.

Once I get Supergirl out with a ring on her, my opponent can only target her with any abilities or action dice that target – and has to pay a life toll to do so.

That meant I could be fairly confident Basic Action Dice like Power Bolt and Magic Missile couldn’t be used against me.  So I included both of those – if I included only one my opponent might try to trip me up by buying the dice out from under me.

Power Bolt/Magic Missile being my primary means of attack made including Boom Boom an obvious choice.  Her D is 2 on all sides, meaning she’s susceptible to removal by the Magic Missile Global if I don’t have the Supergirl/Ring combo up.  Her 1-1-2 fielding cost isn’t the friendliest, but if I can roll her, I’m probably paying less to refield her than my opponent is to KO her.

Using Jimmy Olsen to get to Supergirl, and also having to buy Ring of Magnetism means I need to draw and roll 3 dice to get that combo up and running, so I included Chalkboard to expedite the process.

Against a Hulk – Infiltrate team.  This was practically a Murphy’s Law with dice game for me.  I mentioned above how I need to draw and roll 3 dice to get my combo set up?  This game was the perfect example of why that’s not such a great idea.

I couldn’t land the one Power Bolt die I managed to buy on an action face.

Meanwhile my opponent was systematically whittling my life away.

I doubt I would have won anyway – I don’t think my team matched up well with his.  But with the kind of rolls I was getting this game I’m pretty sure he wins no matter what either of us is playing.

I got the Supergirl out along with a Boom Boom.  He’d bought a Grodd and then a Purple Worm.  He then started buying Kobold Traps, but it was probably past the point where they’d be much use to him.

With PXG in play, he was dedicating his sidekick dice for energy, and he’d bought little in the way of characters except a 6-cost Grodd and a 7-cost Purple Worm.  He was at 10 life when he attacked with Purple Worm, KOing Boom Boom with its ‘when attacks’ ability, as I hadn’g managed to get a Ring on Supergirl.

Supergirl blocked Purple Worm, KOing it, leaving my opponent with only a single Level 2 Grodd die in the field.  On my turn I landed Boom Boom and a Power Bolt die.  I fielded Boom Boom, hit his Grodd with the Power Bolt and twice with the Magic Missile global.  Then I sent everybody I had (Supergirl, Jimmy Olsen, Boom Boom, and 1 Sidekick) through his empty field for lethal.

Batmobile team where the other cards all have Batman or Robin in the name or subtitle, so Batmobile grants a discount on purchas and fielding of those.  The big threat here was the Robin:  Reckoning OP card which makes Robin unblockable when Batman is active.

Of course, that Robin has a bit of a glass jaw in his 1-2-2 Defense.  And I was fully aware I had the Magic Missile global, and plenty of bolt dice on my team.

Eventually he did get a Batman out and started attacking with the single Robin die he’d bought.  Every time Robin attacked, I’d KO him with the Magic MIssile global.

While he was doing that I was getting Boom Boom out (along with the Supergirl/Ring combo) and buying Power Bolt and Magic Missile dice.

I pulled and landed one of each to burn him down to 4 about the time he began attacking with his Robin.

A couple turns later I pulled another one of them, and that was that.

The Supergirl/Ring of Magnetism combo is fun once you get it working, but about halfway through game 3 I came to the conclusion that the effort I’d spent on it was wasted – this team would be much more dangerous if I just started off buying Boom Booms and action dice straight from the outset.

When I say action dice, I’m including uncommon Cosmic Cube – using it allows me to buy both a Magic Missile and a Power Bolt die for the net cost of one of them.

So I would take off Superman, Supergirl and Jimmy Olsen.  I would replace them with common Madame Masque (which would prevent my opponent targeting Boom Boom with the Magic Missile global) and Shriek – Sonic Beam (as protection against common Scarlet Witch from XFC).

Do you have any Impractical Combos you’re tempted to try anyway just for the fun factor?  Let us know in the comments. Thanks for reading, and Happy Rolling!