It was the regular, local, weekly, Golden Age Constructed event. 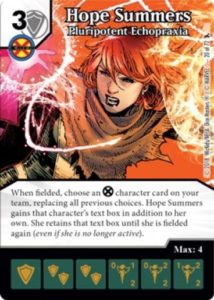 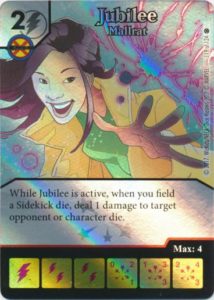 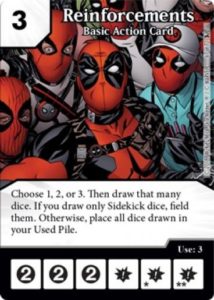 So we have a Hope-Jubilee Sidekick Burn team.  With Hope copying Jubilee’s ability I deal two damage for each Sidekick fielded.  And Reinforcements allows me to field up to 3 Sidekicks each time I use it.

But that means I have to draw 3 dice and have them all be Sidekick dice.  The only way to guarantee that is to have all the dice in my bag be Sidekick dice.  So this team involves some rather strict bag management.  So much so, it’s practically a tutorial on the subject.

To assist with said bag management, the team includes 3 globals (4 total, but Acererak isn’t about managing my bag.) 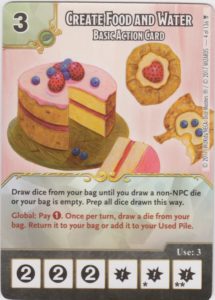 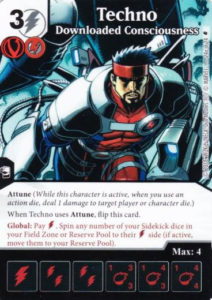 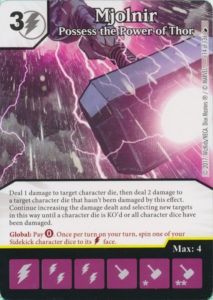 (Two notes:  Techno is a double-sided card, but I have no intention of buying him, so he will never flip over, and Mjolnir could be replaced by the new Intellect Devourer fixer global.)

My goal is to set up my turns where I start with Hope and Jubilee active and have a Reinforcements die in my bag.  And I also have exactly 6 Sidekick divided between my bag and my Used Pile.

What about my other two Sidekick dice?  Most likely, they’re in my Field Zone, but as long as they’re not in my bag or Used Pile, I don’t really care where they are.  Prep Area?  Fine.  Captured and being held by my opponent?  Also fine.

In the Main Step, I use Reinforcements, fielding three Sidekicks, dealing my opponent 6 damage, and emptying my bag.  Then, if I don’t already have a bolt or ? in my Reserve Pool, I use the Mjolnir global on one of my Sidekick character dice in my Field Zone.

On my opponent’s turn, I will use the Techno global to arrange to have exactly 6 Sidekicks in circulation at the beginning of my turn.  Usually, that means I will be leaving 2 Sidekick dice in my Field Zone and turning everything else into bolts.

Still on my opponent’s turn, I will then use the Create Food and Water global to trigger a refill of my currently empty bag.  At this point, my Used Pile should have only the Reinforcements die and one Sidekick die (the one I used for the Techno global) in it.

Three turns of that is 18 damage.  I’ll probably roll at least one Sidekick somewhere during those three turns, or if I outnumber my opponent on the third turn after fielding the three Sidekicks I may be able to get the last two points via combat damage.

Actually, if you try and run this team, pay attention to whether you can get lethal via combat damage.  If you have your opponent down to 5 life, and you have 7 characters to his 2, don’t miss the opportunity.

There are plenty of meta cards that can effectively shut this team down.  The promo Black Widow and the action dice hate Scarlet Witch come to mind.  To make that a little bit harder, I’m going to be that guy and dust off Shriek: Sonic Beam.  Her ‘shut down’ ability remains in effect as long as she’s active, and she’s a bolt character, where the team is already bolt-centric.

Something else I foresee as a potential problem:  Magic Missile.  Hope is 2D on all levels, while Jubilee has 3D on Levels 2 and 3.  If the Magic Missile global is available it only takes 5 bolts to KO both of them.  And 5 isn’t an unreachable total, especially considering I am running the Techno global.

Wonder Woman: Child of Clay would be an obvious solution.  Too obvious.  I’m kind of tired of using her, at least for weekly casual (or casual-ish) events.

My solution for the night ended up being the addition of 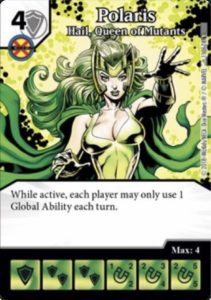 Polaris: Hail, Queen of Mutants to the team.  Yes, having her active would hurt the smooth running of my team – but less so than constantly re-fielding my Hope and my Jubilee after they’ve been Pinged off.  I can still hope to roll a bolt or ? to use for Techno on my turn, then use the Cake global on my opponent’s turn.

For my final slot, I went with the 2-cost common Crystal from the Thor set that allows you to reroll your action dice an additional time in the Roll and Reroll Step.

If I ever miss the action face on Reinforcements, this team can potentially unravel, turning into a sadly out of tune musical instrument.  That’s why Acererak is on the team.  But I figured having Crystal available as well might not hurt.  She’d be especially useful in situations where I felt I did have to resort to Polaris.

Also, since Crystal is a 2-cost, I can buy her without messing up my bag control.  If all I have in my Used Pile is Crystal, Reinforcements, and the 2 Sidekick dice that provided the energy I used to buy Crystal, I can still use the Cake global to force a bag refill and be sure of drawing Reinforcements (and also Crystal) on my next turn.  (I’ll need to use the Techno global on one less Sidekick, so I still have 7 dice (total) in circulation during Clear and Draw.)

So that’s how the team was supposed to work.

On to the results.

Plague Marine, Green Dragon and Lord of Contagion were the characters he got out.

The game went almost exactly according to plan from my side of the table.  Bought the 3 dice I needed, got Hope and Jubilee active, and started turning the crank.

Two more turns of that, and he was done.

(As an aside, if you’re running a Breath Weapon character, you probably want to think carefully about including a D-buffing global on your team.  There was one turn where my opponent had his Breath Weapon 1 Green Dragon active and I had two leftover shield energy.  I used them to buff the two Sidekicks in my field to 2D (after I used the Cake global).  I don’t think he was intending to attack that turn, but if he had that meant my two Sidekicks would have survived his Breath Weapon.)

Use-2-globals-when-fielded Beholder with Kree Captain and Ring of Winter to get to the expensive stuff like Rare Jinzo, Black Dragon and Dracolich.

I went straight for Shriek so I could use her to shut down JInzo.  He got one Beholder out early, which ended up sitting in the field for the majority of the game.

With the exception of buying and fielding Shriek, I just followed the basic recipe and it worked as intended.  I got lethal the turn after he got his Dracolich on to the field.

That final turn was a little bit crazy, as I rolled three pawns in Roll and Reroll on top of the action face on Reinforcements.  I think he was down to 6 life by that point, so I only needed one or the other.  I knew that was possible, I just wasn’t expecting to do it the first night I ran the team.

Penguin to punish players for fielding non-Villains.  Malekith to make his Sidekicks Villains, Blue Beetle so he can deal burn damage by fielding Villains.  And, to make me field non-Villains:  Instant War.  “Oh, please! please!  Don’t throw me in the brier patch!” said Br’er Rabbit.

Not a great matchup for him.

I bought Crystal this game.  I was still setting up and the way my draws and rolls worked out I had the fist and the other energy to buy her without much risk of messing up my bag control.

The first time I used Reinforcements it brought my opponent down to 13 life.  My opponent’s field was empty but I only had 11A.

By my next turn he had four dice in his field, including Penguin.  I rolled one Pawn face, to go with Reinforcements.  That brought him down to 5, Penguin dealing me 4 damage in the process.

Looking back, I may have been a little too trigger happy on the Mjolnir global.

I remember counting that I had 8 character dice to his 4, and so would be 1 short of lethal if I attacked, but I think that was after I’d spun a Sidekick to a bolt with the Mjolnir global.

Not that it made much difference.  I was at 16 life to his 5, and he hadn’t got Blue Beetle out yet.

Nothing of consequence happened on his turn, and on mine, I landed Reinforcements.  Game Over.

This is a dangerous team, and on this night, everything worked for it.  The only real problem I ran into was Jinzo, and hey, that’s why I had Shriek.

Of no real consequence, but I thought it worth mentioning:  For a team with no ramp, this team sees a lot of energy end up being wasted.  After I’ve bought the 3 dice I needed, shields, fists and masks end up being largely useless (aside from the generic globals, and those are limited.)

Also, this is a fast team.  Not the fastest I’ve ever seen, but it doesn’t actually take that long to buy 3 dice costing a total of 8 energy. (Who knew?)  I don’t think any of my games took more than twenty minutes.

So even if an opponent does have a counter for this team, they have to realize it, and get it out quickly.  Because if they don’t, there may not be a later for them.

But, even so, I still think this is a fragile team.  As it stands, if it runs into a team that has, for example, both the Scarlet Witch and Black Widow mentioned earlier it would be in serious trouble.

If someone were to take a team like this to a major event such as a WKO, I think they might be able to make some noise with it, but I don’t think they would be able to take first place.  I really think it would eventually run into a matchup it couldn’t handle before the end of the day.

Would I run it again?  I’d consider it, but if I did, I’d hope for some tougher matchups.  Somebody actually running Magic Missile, for example, so I could see how well (or is that whether?) my Polaris contingency plan works.

That’s assuming Polaris is still on the team.  She and Crystal are the two slots I’d consider changing.

I’m still concerned about Magic Missile.  I just don’t think Polaris is the only answer, or even necessarily the ‘best’ answer (after Child of Clay, that is).  She’s just ‘an’ answer, or at least a potential one for the problem I see there.

Down the road, I may come up with another idea I like better.  Or maybe one of our readers has a clever suggestion to send in?  If so, drop us a line in the Comments section.