We were recently given the opportunity from our friends at Wizkids to check out one of their upcoming board games.  We decided to show it off on our regular Saturday Night Board Game Live Stream on Twitch.  Thank you again to the Team at Wizkids for giving us the opportunity to share this game with you.  Let us know what you think about the game in the comments down below. 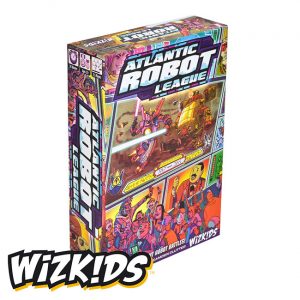 Welcome to the Atlantic Robot League!  Your craving for robot on robot arena action has been answered in this 2 to 5 player table top board game from Wizkids Games.  Do you remember the old series Robot Wars?  Well, this is it in cardboard form.  In this board game, dice teams of deadly mechs will attempt to eliminate one another until one team emerges victorious.  Your goal is to figure out who that will be.  That’s right… this is a wagering game where you will be betting on the results of the robotic mayhem.

“In the far future a new sport has swept the world: giant mech battles! Mile-high giants fight across entire city blocks. Rabid fans wear their favorite team’s colors and gather in virtua-bars to watch the battles. It’s the perfect time for a savvy gambler to get filthy rich…even if you have to cheat just a little bit.

In Atlantic Robot League, players place bets on the outcome of a massive mech battle the size of a dozen city blocks. After bets are placed, they get the chance to influence the battle by sliding the mechs across the arena, knocking out rivals, and buying scheme cards from the insider to bend the rules. Particularly devious gamblers might even pay the fixer to change their bets during the battle.

Occasionally your opponents will be helping a shared bet; occasionally they’ll be knocking out mechs you need to survive. Since all bets are hidden, you won’t know until the end and might even be able to bluff an opponent into accidentally doing exactly what you want.

Five mech teams face off, each with three robots, and in each of three rounds, you bet on which team will have the most surviving mechs, which will KO the most mechs, which team will be eliminated first, and which five robots will be standing at round’s end. The fewer the players who bet correctly, the bigger the payout for those who do. After three rounds, whoever has bet best wins.”

Check out the game play from our Twitch Stream in the video below.

The stream was the first exposure to this game.  The description looked interesting and I do enjoy wagering games due to the sense of randomness.  From a component perspective, this is a well built game.  The cardboard pieces feel solid and well designed.  The actual cards feel decent (kind of a mid-range quality) while handling.  The dry erase components are well done.  Nice size to work with and folds quite well for storage (or keeping your bets secret).  The rulebook is nice and short, which is what you would hope for in a game like this.

What do I mean by “game like this”?  Well, this is not a very heavy game.  It is meant to be light and quick, and it pulls this off spectacularly.  Even having zero experience with the game, it was still a quick 30 minutes or so.  The rules were overall easy to learn and the rulebook was well laid out.  In fact, much of the important information that you need to know is on the board itself, which is always a nice touch.

The art style is actually really nice in this game.  It is going for a sporty arena feeling and they nailed that theme.  The robot team logos look like something you would see on any sports team (yay sports!).  The arena itself looks like something you would expect to see from Robot Wars, although with brighter colours… which work well.  The individual robots definitely have that “I’m going to hurt you” in a nice cartoony way.

You set up the board by laying out the mechs randomly, placing a bounty on the ones that were lucky enough to earn the corner spots.  These bounties are really the only way to earn more credits, so targeting these robots down are likely going to be an important part of your strategy.  Why do you need credits?  Thank you for asking that question dear reader.  First, you can spend a credit at the beginning of your turn to buy and use a card from “The Insider”.  These cards bend (or break) the standard movement/attack rules of the robots.  The cards are fairly clear as to how they work, with decent wording as well as a nice graphic to indicate what they do.  The other purpose of the credits is to pay off “The Fixer”.  Before the first team of robots is eliminated, this kind gentleman will allow you to make some “modifications” to your bet, in the event that you chose poorly at the beginning.  He basically gives you a chance to salvage a bad choice… for a cost.

The game itself is played by initially placing your bets on what you think will happen.  You will be making Team bets, where you choose which Team will have the most survivors, which will have the most KO’s, and who will be the first Team to be eliminated.  Next, you will choose which 5 robots you think will be the final ones remaining in the arena.  This is called the “Pentafecta”.  The more correct choices you make here, the more victory points you will earn.

Each round is played by moving the robots around the arena after the bets are placed.  You slide the robot tiles into an empty space in the arena, and attack adjacent rival robots if possible.  Each team has a set of “rivals” that their robots can attack and eliminate.  If they end their turn next to one of the rivals, they KO them to open up a new space in the arena.  Players take turns sliding tiles until there are only five cards remaining.

When the round ends, you look back on your betting sheet and see how you did.  Players score points for getting things right (obviously).  After each round, you reset the arena and repeat the process.  The player with the most points after 3 rounds will be the winner.

This is one of the few games that we found was fairly accurate in how long it takes to play.  Even as first time players, it was not a long game.  The game is advertised as being for ages 12+, but we all felt that younger players could learn this fairly easily.  We wondered if that was due to the gambling nature of the game though.  It is labelled that it will play between 2 to 5 players, and we think that any of those players numbers will work and not bog things down.  There are not many decisions to be made in this game, so analysis paralysis should not be a thing.

Overall, Atlantic Robot League turned out to be a nice little game.  At a price right around $30 CDN, it would be a decent addition to your collection when you are looking for something on the lighter side of things.  Atlantic Robot League is currently scheduled for release in November 2022.

A nice “filler” type game, with a very easy ruleset.  Great way to start off a game night, or for those times you want something a little more light or fluffy.  I’d give it a solid 3.5 on the meeple scale, as it is a good game… but not one that will scratch that strategy/decision making itch.  – jourdo

This is a nice, quick and very easy to learn game. I wasn’t sure what to expect for this game but who doesn’t like robot battling. At first, you are not sure what you are doing and bet blindly for the outcome of round 1. But once you have a feel for you are doing, there is a bit of strategy. It’s fun for a light game but not a game I would go to, plus the price point is a bit high.    – SuperK

I had a great time playing this game when I stayed up late to hang out with the cool kids.  It is a light game, easy to understand and easy to teach.  Although the theme didn’t appeal to me initially, (too many robots, too sporty), once we started to play, the theme mattered less and I focused on the betting and the strategy, which I enjoyed.  As mentioned above, a light game that would be a good start to a game night, something to get the group going and thinking.  I give this game 4 meeples.  – jocestitch

If you are interested in getting a copy of Atlantic Robot League for yourself, please check out one of the best online board game stores in Canada…Board Game Bliss.  Clicking through that referral link helps the site out and we thank you for that.

🗹 Take a look at our board game channel on YouTube at Only Games : A dmNorthTV Board Game Channel

🗹 Check us out on all of the Socials at dmNorthTV

🗹 Join the conversation on our Discord