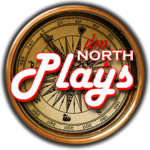 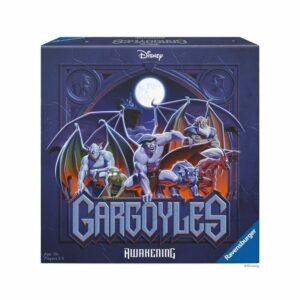 Saturday, we played through Gargoyles: Awakening.  Gargoyles is based on the Disney cartoon by the same name, and is produced by Ravensburger.  It is a 2 to 5 player game where you take on the role of one of the heroic members of Goliath’s Clan and defeat Xanatos and Demona’s evil plans.

You work your way through four different scenarios, which all take place on a 3D board of Manhattan.  Most of the scenarios are designed to play co-operatively, although one does allow one player to take control of the villains.

We were joined by RonathanPxPx to see if we could best both Xanatos and Demon in the introductory scenario, Reawakening.  You can take a look at our gameplay video on our YouTube channel, or scroll on down to see what we thought of the game.

Let me start by saying that I reserve the right to revisit this review at a later date.  First, let’s talk about the good.  The components are fantastic!  The miniatures of all of the Gargoyles look great and have a stone esthetic to them.  The 3D city design is really well executed (even though you need to fully disassemble it to get it back into the box).  The cards and dice are solid.  However, it was actually fairly disappointing to have cardboard standees for the main villains when so much care was put into the other miniatures.  I would have loved to see a miniature for Demona and Xanatos.

Gameplay was pretty straight forward once we got the swing of things.  There was some minor confusion on which symbols meant what early on, but that eventually got itself sorted out.  The whole combat mechanic was well designed with the dice rolls (and who doesn’t love dice rolls).

Now to the bad.  This first scenario was ridiculously easy.  Maybe that was by design, but we did not really feel that challenged playing through it.  Because of my love for the IP, I am willing to give the other scenarios a try though.  Briefly looking through them, they do look like they should be a little bit more of a challenge.  For me, it was the villains turn that left a little to be desired.  It felt like they should have had more to do overall.  There was a point where all of the villains were in striking distance of my character, but only one attacked because that is how the game was designed to work.  This is where the game stumbled for me.  I am hoping that changes in the other scenarios.

As it stands right now, I can only recommend this for the most die hard of Gargoyles fans.  Otherwise, Gargoyles: Awakening is an easy pass for people who like a bit of a challenge from their board games.

I do not know the Gargoyles story as I never watched the TV show but I will play any board game lol. I found the game very very easy without any major challenges. The mechanics could have been better, e.g. when attacking the villain, they don’t get to defend/attack back to make it more exciting. Also, I found the symbols on cards confusing of what did what. There are different scenarios which unsure if it gets better and more challenging but it doesn’t make me want to play it again.

I was so excited when I got this game. Not only is it a Co-op game (which is big in the PxPx household) it’s a Gargoyles game based on the Disney afternoon cartoon from my childhood. The name of the game is to defeat Xanatos and Demona with your Gargoyles. How do you do this? Well each character (6 to choose from, 5 Gargoyles, 1 human) is given a set number of actions to move, glide, attack or play cards. (Each character has their own unique deck).

After one player finishes a turn the villain plays a random card from their deck which moves one of them and/or their minions, which may result in one or more enemies dealing damage to you and/or other players. (roll for damage using special d6 dice: 1 special, 2 miss, 3 hit sides).  The cool thing about the board is that it is 3D (seems cool, but a pain to tear down and setup), you have buildings and towers that you move on/off from. So instead of moving off a building using the move action, your gargoyle may use the glide action which would grant them further traveling distances which is an on-brand mechanic for this game.

Now we played the intro recommended scenario and I have to say that this was the easiest game intro I have ever played. (We took Demona down within 4 turns) I feel that scenario is almost impossible to lose, which is not a good thing for me. I feel that you will most likely get 4 total plays out of the game by completing each scenario (they seem to ramp up in difficulty) and that would probably be it. The real big con for me is that where the enemy appears is predictable if you know the scenario as well as there’s only one lose condition. They could have borrowed from a game like Marvel Champions to have a side scheme as a lose condition as well as Flash Point fire rescue for enemy spawning with 2 dice that are assigned to each coordinate. Seemingly worth a $24 USD purchase to try. 3 Meeples, will play another scenario to see if it will be more of challenge

If you are interested in getting a copy of Gargoyles Awakening for yourself, please check out one of the best online board game stores in Canada… Board Game Bliss.  Clicking through that referral link helps the site out and we thank you for that.