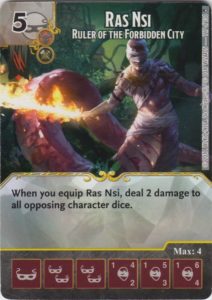 Ever since I saw the R Ras Nsi, I wanted to do something with him. What better way than to suit up (so to speak). The plan was to buy obscene amounts of gear and swap it every turn between ideally 2 Ras’s. The Orc was to make everything cheaper. Xandala was extra action burn and a Yuan Ti counter if she showed up. I limited myself to stay in Universe, so Ramp was limited. Tabaxi was one option and some anti-swarm tech. I just wanted to try out the Green Devil Mask to see how it would function (hint: not well).

On to the games…

Against the C Kate Bishop. Yes, you read right. We dared him to make a team with her and he did. Actually used Pizza fairly effectively too. Tabaxi did most of the work here thanks to his Mimic Ramp. Eventually got a Ras out and cleared out everything for lethal.  (1-0)

Against a Villain team centered around Malekith (who gives Sidekicks Villain Affiliation), and the Wrecker Who buffs Villains. Mix in some Switch and the Insect Plague Global to make the buffed Sidekicks unblockable. Luckily, I got 2 pieces of Gear out before Switch showed up. That was enough to keep her off the board. Then the 3rd piece of gear hit and nothing was able to stay. Eventually built up my board for a win.  (2-0)

Miri/Multiple Man/Chwinga/Doppelganger/Front Line. His goal was to flood the board with Swarmers and outnumber me for the Front Line. Once Ras hit, I was able to thin the board. Once two of them hit, nothing could stay. Same as before, built up enough damage for lethal.  (3-0)

Ras is excellent control, and the Gear rules make him incredibly effective. The biggest problem is the lack of Gear in Modern. The other big knock on this build was the ramp, or lack thereof. If I were to do it again, I would not have near the amount of Gear I put on the team. Maybe 4 pieces MAX. Chalkboard would be helpful here too. Definitely a team I plan on revisiting another time. If Modern had more Gear options, I think Ras would be a really good card to have.