Can I use Villainous Pact as a win condition without it blowing up in my face?

Officially, it was regular Golden Age constructed this week.

I decided to base this week’s team around an action rather than a character.  Specifically, this basic action: 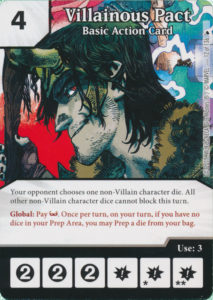 First issue:  Villainous Pact isn’t terribly useful against an opponent running a Villain team.  What to do in that case?  How about taking away my opponent’s Villains?  Enter Ra’s Al Ghul 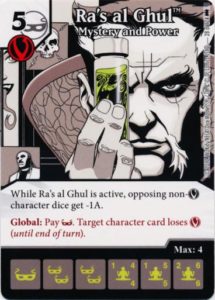 Specifically, his global.  Using his global will allow me to strip the Villain affiliation from each of my opponent’s active characters before I use the Villainous Pact action.

That led to the inclusion of common Morphing Jars on the team, primarily as potential fuel for the Ra’s global.

Most players realized long ago that it is imprudent to run the VP basic action when you’re not running a villain team, no matter how tempting you find the Prep global included on the card.  That is because your opponent can buy the action and use it against you. 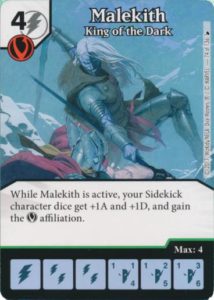 The down side of including Ra’s al Ghul is an alert opponent might recognize the opportunity to strip my characters of their Villain status and use the action against me.

Fortunately, there is insurance against that – Uncommon Malekith makes my Sidekick characters into Villains.  Villains who can’t be stripped of that status by the Ra’s global.

One of the other issues with Villainous Pact is it does leave your opponent with a blocker, even if only the one.  Generally, that means he can still block your single biggest attacker, unless you take steps to work around that. 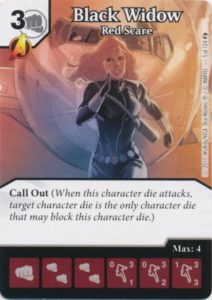 like including a Call Out character such as Black Widow.  She ties us the opponent’s lone blocker, and my big guns go through for full damage.

That’s the core of the team.  There’s a lot of flexibility in fleshing out the team, although you will want to include a decent complement of Villains.

I also opted to include the Maria Hill from Civil War who can block any number of Sidekicks.  With Malekith out, that means if my opponent tries to use VP against me, Maria can block his Sidekicks, and my Sidekicks can block his non-Sidekick characters even if the Ra’s global leaves me without any Villains.

The last slot went to the Uncommon Madame Masque, who prevents my opponent’s “when fielded” abilities from triggering.  I wanted a Villain who was some kind of control piece for the slot.

That left several options.  I went with Madame Masque for the sake of mixing things up – I get a little bored of using the same characters constantly, on top of which I don’t want to be too predictable to my opponents.

How did things work?

He was running his team from last week, and insisted on abiding by the Jank rules from that event, which meant he’d lose dice when he used his own globals.

This was the same Bahamut team I played last week, and the game went roughly the same.  He didn’t seriously try to get his Rare Wasp out (even though I didn’t have a counter this week) trying to ramp to Bahamut as fast as possible.

His BACs were Pandora’s Box and The Outsider – one with a Villain maker global the other with a +2A Villiain buff global (once per turn per target die).  He hadn’t really given any thought to BACs when he built the team, and those were the first two he found when he was scrambling to find BACs to put on the team.  They worked better for me than for him.

He didn’t buy much besides one Bahamut die, and had a relatively thin field all game.

I didn’t actually buy Villainous Pact this game.  Occasional pokes from Sidekicks (usually boosted to 3A from the globals on his BACs, occasional use of the Wasp global for direct damage made the difference.

We both got in one turn where we did double digit combat damage, but that was the only damage he got in.

He also had the Plague Marine that buffed Sidekicks, but KO’d them at end of turn.

I concentrated on buying character dice and got a Mystique, a Foot Ninja and a Black Widow out.  He had a Tabaxi Rogue, a Falcon, 3 Sidekicks (mostly courtesy of his use of Instant War) and a Plague Marine he had to decide whether or not to field.

He had to judge whether it was riskier to attack immediately (and lose most of his blockers) or wait (and let me actually buy my Villainous Pact dice).  He opted to attack, leaving him with a Tabaxi Rogue and a Plague Marine to block with.

It proved not to be enough – when he’d used Instant War I’d pulled three Sidekicks of my own, so both my Mystique and Foot Ninja had sizeable buffs on them, and with Call Out in the mix he couldn’t block both of them.

It didn’t end the game then and there, but he took the worst of the exchange, putting him in a hole from which he was unable to recover.

Jourdo’s Defenders team.  That team is a slow starter, but one it finally gets going, it’s a tough nut to crack.

I bought two of his three Teamwork dice, which I suspect may have ended up being the difference.  It was mostly to deny them to him, but with Malekith in the mix, Sidekick dice can be buffed by Teamwork and I managed to hit him with couple of waves of 6/6 Sidekicks,  Unfortunately, he always managed to find blockers.

His Billy Club and his Iron Fist managed to get rid of Malekith and, in turn, my Sidekicks.  I couldn’t manage to re-roll Malekith, and I couldn’t field Sidekicks because I couldn’t risk the damage from Iron First KO’ing them.

Neither of us were able to get out walls noticeably bigger than the other (so Teamwork buffed leakers could get through for big damage), but I was eventually able to pull and roll both a Teamwork and a Villainous Pact on the same turn, which combined with Black Widow’s Call Out got me enough damage for  the win.

Not a bad team, if not the most exciting one.  The Ra’s global didn’t see any use (for or against me) on the night, but it was always a contingency plan.

I only used the Call Out/Villainous Pact combo in one game, but it was basically what won me that game.

As I mentioned in discussing the build, there is a lot of flexibility on the team.  You want a cheap Call Out character, and Black Widow is the cheapest one available, but if we ever see Call Out on a Villain, I’d consider swapping them in if the purchase cost was reasonable.

I’d definitely keep Ra’s for his global, even if it is unlikely to be needed often,  That, in turn, means I definitely want to keep Malekith on the team.

I want a cheap Mask character, but I might consider swapping Morphing Jar for a 2-cost mask villain.  Then again, there are only 3 characters that fit that criteria right now (only 2 of which are Modern legal) so choice is kind of lacking.

I’m satisfied with how the team ran, but what tweaks would you want to make if you were to try running it?  Different heavy hitters?  Different control pieces?  Let us know in the comments.