We are back with another Community Spotlight.  This time, we are looking at some cards inspired by the recent Amazon series…

This custom set is was something I started brewing as soon as I started watching the series.  I really enjoyed the comics, and the Amazon series just sparked the creative juices.  I hope you enjoy it.

Ok, let’s get something out of the way right off the bat.  I don’t generally build “sets”.  I prefer to try and make thematic cards to match whatever I am working with.  So, even thought I am calling this a set… it is more a collection of cards based on Invincible.  We’ll circle back to that a little later. 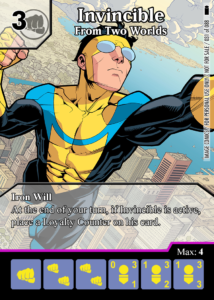 The whole set starts with this guy.  I knew exactly what I wanted to accomplish with him.  The idea was to allow him grow the longer he hung around in the Field.  Like the comic series, Marks powers became more powerful as he aged.  The upcoming Loyalty Counters (from Dark Phoenix) made this easy to accomplish.  It really helped the we had a die that was almost made for this character, with the Kree Captain.  Iron Will was a easy addition to give the young Viltrumite.  This might be my personal favourite from the whole collection.  One down… a few more to go.

For those familiar with the comic series, there are no shortage of characters that could be included here.  However, I decided to focus on things that happened in the first season of the Amazon series for this project.

There are a lot of heavy hitters in these cards.  Omni-Man, Immortal, and Allen the Alien are all meant to punch things hard.  Their stats and abilities are meant to reflect how strong they are.  I quite liked the built in rivalry between Immortal and Omni-man with these cards.

While not big players in the series (so far), I wanted to give some love to the Totally-Not-Cobra terrorist organization known as The Lizard League.  I wanted them to play off of each other and give some direct damage options (for the players who like to punch from a distance).  Also, any excuse to add in a new Affiliation is good by me. 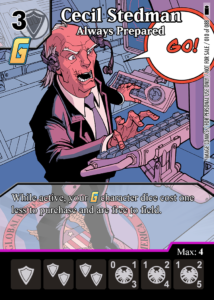 I tried to do the something similar with the Guardians of the Globe.  While they don’t necessarily tie directly together, using Cecil Stedman will help bring your Guardians out for battle much easier.

Then you can bombard the opposing Field with Rex’s ability.  Grow your Field presence quickly with the many Tokens of Dupli-Kate.  Speaking of Field presence… do you like using your Opponent’s characters against them?  Maybe Robot is your man then!  How about swinging in for that one big hit with Monster Girl?  I tried to make a nice mix of abilities here that hopefully creates a nice Team. 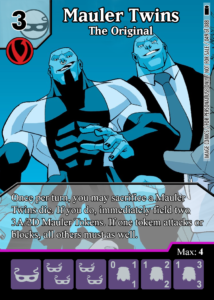 A hero is only as good as his villains, and Invincible has loads of those to work with.  The Mauler Twins are one of my favourites here.  They are all about doing things together.  Once die quickly becomes two (to represent the cloning process), but they do everything in pairs.  Maybe making this a max 1 die would have been a little more thematic?

D.A. Sinclair can help you build a Reanimen army by using Sidekicks as raw materials.  Titan takes control of the game by making it harder to field things as well as reducing damage with his rock hard exterior.  His buddy Isotope will blip your Opponent’s dice from one spot to another.  Their ex-boss Machine Head will control the game a little differently than his successor by rerolling dice you may not want to. 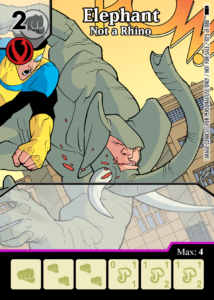 And then there was this guy… Elephant.  I have no idea why this character is such a running joke throughout the entire run of the comics (spoilers), but I felt compelled to include him here as well.  If I do get around to making other versions of cards for this set, all rarities of Elephant will be blank… except maybe the super-rare.

I’ll leave you to discover the remaining Villains in the galleries below.

Normally, I kind of stop at characters and leave Basic Actions out of the equation unless it is a special occasion.  This happened to be one of those occasions, so I put together a few options to use with these cards.

These three Basic Actions were my favourites.  Crossover should be a thing in Dice Masters.  The whole game is about mixing things together.  This encourages you to mix as many different IP’s and sets as possible.  Almost like this card was built for the 10/10 Format.  Also… that artwork is killer.

Originally, Time’s Up was going to be a Delayed Blast Fireball clone.  While it keeps some of that ability, it gives your Opponent a way to deal with it at a cost.  They can let the bomb go off or they can choose to disarm it.  The choice is theirs.

I feel that the White Room really captures the moment of surprise when Invincible is exposed to that environment.  You have no idea what is coming at you… but something is.

Obviously none of these have undergone any sort of playtesting.  I have a bad habit of creating things that end up breaking something… and am sure I did something here I may not be aware of.  Regardless, I had a blast designing these cards and have a few more characters sitting on the master spreadsheet that I did not include.  You should learn about some of them in season 2 (I didn’t want to spoil anything big for those unfamiliar with the comic book).  😉

Here you will find a gallery of the Invincible cards that I have created so far.  Feel free to check them out below.  These are not to be printed or distributed for sale.  They are for personal entertainment purposes only.

I hope you enjoyed this little Community Spotlight.  What do you think of these?  Let us know in the comments below!

Let’s take this chance to circle back to my incomplete set comment.  Keen eyed readers will notice though that I have left some room in the numbering to allow for some “other” versions of these cards.  While I may eventually get around to these, I thought it might be fun to open up these slots to the creative members of the Community to fill in the gaps.  I would love to see what you can come up with to augment this set and see what other versions of these characters you can come up with.  Do you feel an existing ability fits someone here?  Do you have a unique idea for a character ability that might work?  Let me know.  I always love seeing what others can do with this sort of thing.

Do you have some creations that you want to share with the Community?  Get in touch with us via any of our Socials (@dmNorthTV), or hit us up by email.  We would love to hear from you and share your creations with the Dice Masters World.