The original plan was to play Constructed tonight, but the Game Shop got in some TOA Draft Packs in and we decided to switch gears. For those who do not know, a Chaos Draft is when you draft from different sets in the same draft.  Normally, this is two sets.  We decided to embrace the chaos.  There were only 4 of us there tonight, so we decided to really mix things up for the event.   We added in 6 boosters of Thor as well since it was back in stock today.  More or less, the draft pool was really weak through this.  One of the guys had bought some cheap Green Arrow/Flash feeds and has been trying to get us to do a cheap draft with them.  We went for it tonight.  Added in 4 more packs of GAF.  Still garbage.

“Please sir, may we have 4 more of these cheap packs?”  Score!  Surprise Grodd (Rare) comes out of the first pack!  Super Rare Zatanna comes out of another.  Lucky guy beside me got the SR as I was not passing up on a shiny monkey. 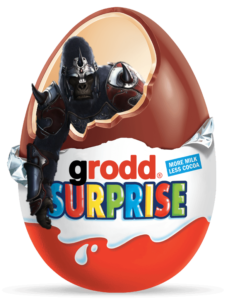 Our rule with all of this Chaos was that we had to include 2 cards from each set on our team, with the final 2 slots being whatever we wanted from what we drafted.

The Team:  Grodd and Other Stuff

This Team was all about getting to the monkey and hitting hard with him.  Thor was there for protection.  Pepper was ramp.  Batiri Battle Stacks were mostly for the fists to use with the Hulk Global.  S.T.A.R. Labs served as ramp and the action itself would be decent removal with Thor.  Basilisk was a non-factor and really only took up the second TOA slot because I had 4 dice for it.  The BAC’s were more or less garbage for what I was planning, but it is what I was dealt.

Let’s see how the monkey played.

Volstagg was the main threat, but the Team also had a Rare Zombie from TOA on it.  That was an interesting card and a great way to convert a Sidekick into ramp and a bigger character at the same time.  I will need to check him out again sometime.  The best part of this Team, for me, was Cake and Cyborg Global.  Cake made my Team actually really fast.  I actually had enough energy to Rip over the 7 cost Thor on an early turn (all Sidekicks).

This version of my Team actually had Weather Wizard and Xandala instead of the Battle Stacks and Hulk.  I subbed them in after the game when I realized they were a better fit.  I did use Weather Wizard as an aggro piece as he got buffed against non-Crossover characters.  Grodd came out a ridiculous amount of times and rolled pretty much every time.  Eventually he got that SR Zatanna out as a blocker, but Thor threw S.T.A.R. Labs at her to allow for a lethal amount of monkey business to go through.

Grodd vs Red Dragon.  Breath Weapon vs Unblockable Damage.  Long story short, the loss of Cake and Cyborg slowed down the Team a bit.  I did manage to hit him once for 12 thanks to the Hulk buff.  However, his Breath Weapon kept my board thin and when things did stay, he had the Insect Plague Global to make a Sidekick unblockable.  In fact, that is what killed me.  A Hulked Out Sidekick.  Oh well.

This last game was against a bit of a mish-mash Team.  It had an Immortal Hogun, Static ping, Tabaxi burn… basically a little of this and a little of that.  Pepper had a hard time surviving the Static pings, but she served her purpose enough to get some Grodds.  Buffed him whenever he hit the field and only needed him to attack twice.

This was probably the most fun I have had with a Chaos Draft.  Previously, I have hated it.  I think the difference came with adding in the third set and forcing us to include two cards from each on the Team.  I would highly recommend trying something like this out if you can.

As for the Team itself?  Grodd is good. Even with the risk of Crossover characters showing up, there was only one all night.  I have not had a chance to play with Thor previously, so tonight seemed like a good chance to try him out.  I never got to use his ability, but definitely want to try him out on another build.  If you have never used the actual action of S.T.A.R. Labs, you are doing yourself a disservice.  It is an excellent removal tool.  Pepper Potts is a great ramping tool.  Really, the rest of the team is what it is.  It was not a bad Draft Team.  It definitely helped to have a huge piece to focus on and just using it as a battering ram over and over.

On the topic of Team Building…

In case you were not aware, we are working with the guys from Dice Masters with James and Zack and running a Team Building challenge for the month of March.  Check out the details here.  We’ve already gotten some great submissions and are looking forward to seeing as many more as you want to throw at us.  Remember that a shiny green prize pack is up for grabs.

As always, thanks for reading!  If you have any comments or suggestions, please feel free to leave them below.