Big news, everyone! New Dice Masters entries were added to Wizkids’ Solicits page (which can be found here). Three items were added.

All of the following is currently scheduled for release in September 2018. 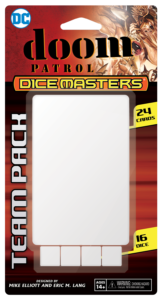 I’ll admit I know little about the Doom Patrol. But I’ve been seeing them mentioned repeatedly as characters we’ve been missing from Dice Masters. I’ll certainly be looking forward to discovering Negative Man, Elasti-Girl, Mento and the rest of the team. 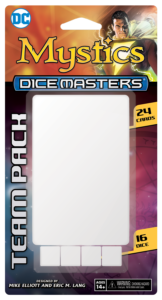 Here’s an interesting twist. We have certainly seen some mystics in previous sets, but outside of Zatanna, the only characters with the Mystics affiliation have all come from Marvel. Will we finally see Dr. Fate in Dice Masters? How about a (non-lantern) Spectre? Phantom Stranger? The possibilities are mind-boggling.

Team Packs typically have 8 characters, with 2 dice and 3 cards per character, so this is likely what we can expect from both Team Packs.

We currently have limited information about these sets. We’ll update this article as more information becomes available. Stay tuned!

UPDATE: ICV2 has now posted an article on the subject, which you can find here. From this article, we know the following:

On the Campaign Box: it will include 15 characters (and presumably one non-basic action, based on the size of a campaign box), featuring the Justice League and the Legion of Doom, including:

The Doom Patrol Team Pack will include, among others:

The Mystics Team Pack will include:

As previously speculated, the Team Packs will each come with 24 cards and 16 dice.

I, for one, am now very excited for this. What are your thoughts? Feel free to discuss in the comments below!