Last year, I created a variant for Dice Masters that tied in to Infinity War (you can find the link here).  With the Endgame fast approaching, we decided to have another go with the Infinity Stones.  I decided to take the opportunity to tweak a few things on the stones (there were a couple of unintended interactions with the originals).  This time around, I decided to add in the big guy himself… Thanos.  Take a look at the cards below, as well as the specific rules explanation for this variant.

Ideally, tonight would be about chaotic fun more than anything else.  The limitations that we placed on tonight’s build were that any characters you used had to have the Avengers affiliation.  Actions and BAC’s had to be from the Marvel sets.

Looking at the limitations, the first thing that came to mind was that Ramp was going to be hard to come by.  There is not much in the Avengers characters that allow for decent Ramp.  Knowing this, my first selection for the Team was an old favorite… Nasty Plot.  It also doubled fitting in with Thanos by having him in the picture. 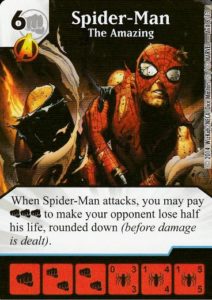 Ramp was settled, now I needed a win condition.  My first choice was a card that another player actually complained about last week…  Spider-man: The Amazing.  This is an old school promo that has the least thematic ability I can think of for Spider-man.  For the small price of 3 fists, you can decimate your opponent’s life really easily.  Life loss… not damage.  Great ability, but it sure does not scream Spidey to me. 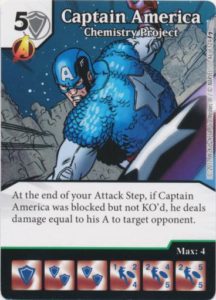 Alone he is good, but with a friend he can be even better.  Welcome to the Team Captain America!  I feel he is a little bit of a cheat to include, as I wanted to try something different.  He was a decent alternate win condition and worked well with Spidey though, so he made it into the fold.

Since both of these are related to attacking over and over again, I wanted to ensure they survived.  Kate Bishop just happens to be an Avenger with a nice Global to bounce Cap or Spidey back as needed.  On the Global front, I needed a way to ensure that Captain America was blocked.  Wasps fits that perfectly with her nice little mask Global.  Cap and Spidey are now well set up to function fairly well.  It is time for the accessories.

I need a good way to buff Cap to get the best bang for my buck.  The Avengers ID Card can do that, and can also some provide me some much needed Ramp.  The other buff option comes from Hulk and her fist pumps.  Both good options depending on what actually happens in the game.

3 Slots left and I need some protection and/or removal.  SR Ronin was my protection option.  He can allow big things to pass through unblocked and redirect the damage over to him.  He also served as masks to help bounce Cap and Spider back as needed.  The final addition was Hooty McBoobs (Black Widow) and Confront the Mighty.  Hooty would protect me from the pesky pings and also make Confront the Mighty a little more one sided.

Not a bad group of characters to work with.  The hardest part is getting to Captain America and/or Spider-man.  Let’s see how this works.

So… something went wrong when we printed these promo cards.  The purchase costs were wrong (Thanos came out as a 9 cost and the Gauntlet as a 5 cost).  These were not the intended cost, and resulted in the cards not seeing much play tonight.

Up against a lot of big butts that would get swapped by the Ant-man Global.  The big hitter was going to be the unblockable Nick Fury.  Ramp was definitely slow and I went with Nasty Plot and lots of ID Cards, which worked… not terribly.  I was struggling to get to Spidey, but did manage to get to Cap.  Once he hit, the engine ran fairly decently.  Attack with Cap, buff with Cards, force a block, bounce Cap back, deal damage.  Rinse and repeat as needed.  It helped that my opponent could not roll his big butts on their big sides.  Nick was constantly on level 1, which was not a huge threat.  Cap won this one almost on his own.

This one was up against what he called “the non-dust Team”.  All of his characters survived The Snappening from Infinity War (he had Giant Man on the Team, who unfortunately did not survive but it was still a great theme build).  The buffing Widow was going to be the big problem here as his Field would just get big and he would try to outnumber me.  I got a hold of his Investigations and managed to get to 6 energy fairly early.  Enter Spider-man.  He did the heavy lifting in this game.  The first time he hit, it was 20 down to 10… then 5.  From there, I had to manage the numbers to where I had 1 more character than he did.  I turned that last Sidekick into an Avenger and then hit him with the ID Card with couple of Hulk buffs for the win.

This was… not an Avengers Team.  He stretched the build and decided to use characters that were keepers of the infinity stones.  He had an unblockable Namor and a Sidekick buffing Captain America as the big threats.  I went for Ronin early here as I figured he would be helpful.  In this game, I reverted to my Captain America option.  Ronin definitely made the difference here as I could allow big things through when needed.  My Cap did his thing, and Ronin controlled the threats really well.

Since we were done a little early, we decided to have a rematch (unofficial as it was).  I decided I would go without Ronin in this game.  Widow and Hulk were the characters I went for.  His Field built up really fast, but I managed to match him… for a while.  Then my dice decided that they had had enough for tonight and I stopped rolling characters.  On the lethal turn, I had an empty Field and I chose to buff one of his Sidekicks.  He attacked with everything but the Sidekick I buffed.  I was dead no matter what, but I did appreciate the hilarity of holding back the Sidekick I had powered up..

First… the printing glitch on the Infinity Cards kind of took away from the original plan for the night.  I don’t think they got played at all.  I’d love to give these another go in a more open format.

On that note, for such a limited build, this was a pretty fun Team.  I forgot how ridiculous that Spider-man was.  It is a crazy ability… period.

This Captain America is nothing new, but I had not seen it run with the ID Card as the buffing option.  It worked surprisingly well to be honest.  Kate and Wasp were essential for this combo to work though.

Ronin was another blast from the past for me.  He is just so good at dealing with giant chunks of damage.  This is still a great card.

Nasty Plot is not amazing Ramp, but I didn’t have many choices that I could see.  It is a card that I used a lot back in the day, but there are better options out there in general builds.

Overall, a fun little build.  It could have been better with some tools outside of the limitations, but that was part of the challenge.

If you were going to Assemble an entire Team of Avengers, who would be on your roster?  Let us know in the comments below.