I mentioned it before, but I’ll repeat it here: I don’t like SR Yuan-ti teams. But I like Attune as an ability; I find it fun and interesting. So when we saw spoilers for Wasp in the Avengers Infinity box, while I certainly didn’t like the idea of making Attune stronger, I figured it would finally give us a different way to use Attune. This week, I decided to put this to the test, and so I got…

The Team:  An Attune team I don’t hate? Oh yes.

Before building this, I laid down some ground rules: No SR Yuan-ti, and no R Pseudodragon. Also, I will aim to win with combat damage from Wasp as much as possible, with Attune’s main purpose being to clear the opponent’s board.

There are three Attune characters on this team. The first two will be very familiar: C Yuan-ti and U Xandala. Xandala in particular was important in case I ran into dragons. The third, of course, is Wasp, who gets bigger the more I use Attune. 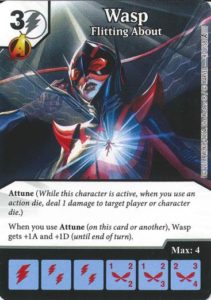 With this kind of ability, I need actions to use her with. The more often I use them, the better. Enter Thrown Brick. It’s a cheap basic action that Preps itself, makes for fantastic ramp, and can even do mild removal in a pinch. It’s brilliant.

I also put in Avengers ID Card to buff Wasp. Heck, I can even make Yuan-ti an Avenger and buff her with Avengers ID Card, which also makes her unblockable (shenanigans galore!). I also put in Mjolnir for added removal (plus an excellent global) and Raised Shields serves to give Wasp Overcrush, to put her (by then) huge stats to good use.  Overall, this gives me lots of actions I can use to make Attune work, even if my opponent tries to scoop up all of my Thrown Bricks.

As for the rest of the team, Shriek serves for blanking as usual, Acererak serves to fix unlucky rolls and partially counter Scarlet Witch, and Atlas is there to ramp with his global, Fist Res, which I hereby name “Fez”.

I started off against a Thanos team. Wasp took a while to hit the field (she just wouldn’t roll!), but Thrown Brick started doing its thing without her, and with that kind of ramp, by the time Wasp hit…oh boy. On my last turn, I had all 3 Attune characters, and 5 (!) actions (3 Thrown Bricks, 1 Investigation, 1 Raised Shields) all landing on an action face. I used Thrown Bricks on her Thanos (making for a funny mental image), just obliterated her board with Attune, and swung in with a 19A/20D Wasp with Overcrush. Yes, I won.

For this match, I was paired up against the crazy Batiri Doppelganger Swarm burn team. This time, Wasp hit the field early, I used some early Attune to wear down the opponent, Thrown Bricks for crazy ramp, and by the time the Attune trio hit the field, I just wiped his board and swung in for the win. Wasp was only 12A this time…

I went up against an…Ultraman team? Yeah, this is a returning player who is running his old team. It’s officially Casual Golden Age, after all! I dreaded this matchup, but he had weird rolls early and didn’t have the energy to buy Ultraman. Doesn’t help him that he identified me as the aggressor in the matchup and got Scarlet Witch out quick to slow me down. Acererak saved my bacon here, and allowed Thrown Brick to keep going. On turn 6, I had the 3 Attune characters and 2 Thrown Bricks. Both Bricks rolled despite Scarlet Witch (lucky!), and my opponent had been worn down by some earlier Attune damage. I wiped his board (which was lean since Ultraman hadn’t arrived yet) and swung in for exactly the right amount of damage (thanks to Wasp), thus rushing down my opponent for the win.

My final match of the night was against another Attune team, this one with Pseudodragon, but not the SR Yuan-ti. Can still hurt, but it’s not as fast as the typical competitive build. That game came down to me getting Thrown Bricks quickly, and setting up my ramp faster than he could set up damage. Had he gotten to my Bricks before I did, I might’ve been in trouble. But as it was, he went for his Confront the Mighty instead, and even though he had some annoying control pieces (that UC Basilisk chief among them), my build was simply faster. I again set up the 3 Attune amigos, rolled all 3 Bricks and a Raised Shields, wiped his board, made Wasp huge (14A), and just swung in for way too much damage for the win.

-Thrown Brick. Is. Bonkers. If you see that across the table, and your opponent doesn’t have Scarlet Witch or other action hate, get those Bricks ASAP. The ramp is fantastic, and I frequently rolled 10+ dice. Don’t forget to buy a character with high enough defense though!

-Bag control is difficult to get used to with this team. You want to buy a ton of actions, which goes against my natural reflexes. But the Brick makes for such great churn that even when you load up a huge bag, it doesn’t hurt you as much. It’s weird.

-I didn’t get around to the Avengers ID Card shenanigans. Mostly because my opponents didn’t know Thrown Brick enough to buy it off of me, so I never had to go to that backup plan. I’ll have to try those types of shenanigans again sometime.

-If you can’t tell by now: Wasp is completely insane in the right build. She gets way too huge and really hard to stop. I can’t begin to imagine how she would be in a more strictly competitive build. I will point out that she ended up being a bit overkill though. I could’ve won by burn without attacking with her during some of the games.

Overall, this is the most fun I’ve ever had with Attune. Loved this team. It might’ve been a bit too strong for our typical tournaments though.

2 Replies to “Attuned In”