So, tonight was going to be all about showing how good the new Keyword Strike is.  However, that all changed when I got my hands on this guy: 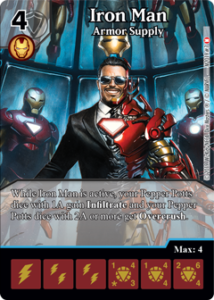 Ever since this guy was spoiled, I had a combo in mind.  This Iron Man with the Rare Pepper Potts from Thor is a match made in heaven.  Pepper will get +3A/+3D from having Iron Man active, and Iron Man will also grant this Pepper Overcrush.  This is the core of the build.  Spam the Field with cheap Peppers and get an Iron Man to give the spam a little extra damage potential with the Overcrush.

So, the core is set.  Pepper and Iron Man are the win condition here.  Everything else was just going to be accessory pieces.  The first accessory piece I added was one I have been excited to try since I first saw it spoiled.  Parasite: Maxwell Jensen.  This is basically a free buff for Pepper when I get him in the Field.

The other new part that I wanted to play with was the Clayface Global.  After Laurier showed how abusive it could be in his last article, I decided I wanted to see for myself.  The other Global I went with for this Team was the Groot Global.  Since both of my key pieces are Stark Industries affiliated, I figured it would be a way to get Peppers in the bag a little faster.

Black Widow was added to just deal with annoying ping BS, but honestly did not come into play tonight.  She was nice to have though.

War Machine was the final inclusion.  Not that I really planned on using him, but if something shut down Pepper… he would be a good Plan B.

On the BAC front, I went with the ever popular Resurrection for the Global and decided to try out Excessive Force from the new Justice set.  Excessive Force was mostly there for the Global, but the action itself could give me some decent removal options if needed (something this Team is overall lacking).

With the pieces in place, let’s see how it ran.

First out of the gate, and I was up against a new Black Canary/Danger Room combo.  When she attacks, Villains cannot block.  Danger Room basically makes their entire Field unblockable when that happens.  His main damage was coming from Batman who likes to buff Sidekicks.  We both brought Clayface and both put it to good use.  Turning one energy into two and buying things faster than normal was fun.  I was able to get the Peppers and Iron Man train running fairly quickly.  Pepper buffed with Parasites became too much and I was able to hit lethal before all of his pieces were in place.

Second game in, and I am up against a new Black Canary/Danger Room combo.  Did I miss a memo tonight?  This one use the steroid using Kree Captain to punch hard.  He also had an annoying Blackbird the messed with my Clayface more than I would have liked.  Since this is Gord’s build, I will let him go into the details… it was really cool.

I struggled to get Iron Man out, and the shutdown of Clayface made the Pepper Parade a lot slower this time.  It didn’t help that I made a critical math error that dropped me to 1 life in one shot.  He won shortly after that, but not exactly as the Team was designed to.

This was up against out youngster.  I find playing these games the most difficult of the night, because you have to balance out not gunning it with trying to teach them how to play the game.  I still went with the core strategy of the Team.  It won.

This Pepper and this Iron Man are great.  Parasite is an excellent addition to a combat focused Team.  Just having a buff sitting in the Field was fantastic.

Clayface is what made this engine run though.  A few times, I was able to buy a Pepper to make more energy to buy another Pepper.  This is nuts.  Laurier already went into the abuse potential of this Global, and he is not wrong.  I saw this used to maximum abuse with PXG in the latest Weekly Dice Arena (4 dice for 1 mask?  WTF?).

The Groot Global did not get used as much as I would have liked, but it worked well when needed.  Kind of a poor man’s Chalkboard.

Black Widow was nice to have, as I stated earlier, but there was no need for her tonight.  I would still keep her around on future builds though.

The Resurrection and Excessive Force Globals worked exactly as they should have.  Giving Pepper a little extra punch was never a bad thing.

Rescue and War Machine were actually weak links tonight.  I really did not need them at all.  Pepper and Iron Man were fast enough that I really did not need the Plan B.  I think I would drop them both off of the build for something that would help the core better.  What that is?  I don’t know right now… although I still like the LOL-factor of having Pepper and Rescue on the same Team.

If you get a chance to get your hands on the new Stark Industries OP Kit, I highly recommend that you try out this combo.  On a side note, I found it hilarious that the Pepper Potts included with this OP Kit was the one that cannot attack.  It doesn’t work nearly as well with this Iron Man.

If you have taken the Pepper/Iron Man Train out of the station yourself, let us know what you did with it in the comments below.  It is a great combo and I think there are so many possibilities to mix with it.

As for Strike… that will have to wait until another day.

One Reply to “Assault ‘N Pepper”