Okay, the team’s much more ‘Battery’ than ‘Assault’.  I needed a title with a little more oomph than just ‘Battery’ or even ‘Lantern Battery’.

The latest round of the local Achievement League began this week.  A lot of the challenges from previous rounds are being phased out, and to be honest, I wasn’t entirely clear exactly which challenges were still in use.  I did know that players would get 10 points each week for playing a Modern legal team, so I decided to go that route this week.

In our league, Modern means the official definition of Modern as of the date in question, so War of Light through Deadpool are considered Modern legal through the end of May, but only until then.  I decided to use some cards that will be rotating out before the window closes.

I started with the Super Rare Lantern Battery which forces my opponent to pay 1 life per character to block.  I decided to try pairing it with characters who would require multiple blockers, like Hill Giant, Giganta and King Shark. 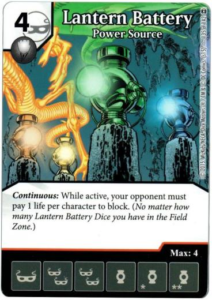 S.T.A.R. Labs and the Midgard basic action were included to give me potential sources of ramp.  Trusted Friend was included for the global, so I could make use of Power Girl’s ability.

Immortal team.  The Uncommon Sif was the biggest problem here.  My opponent really struggled to roll characters early in the game, which allowed attacks from my Hill Giant and Giganta to get his life down to 5, since he only had a single sidekick in his field, which wasn’t enough to block either of those.

And then he started rolling characters and building up his field.  I didn’t see any opportunities to damage him further without dangerously weakening my own field.  I didn’t manage to buy Lantern Battery until very late in the game, and never got it into the field.

I miscalculated late in the game – I forgot Giganta needs to be on the field at the start of the turn (and spun up) to require multiple blockers.  I ended up making an attack that wasn’t for lethal, and gave my opponent the opportunity to finish me.

Team centered around Thor:  God of Thunder from AvX, supplemented by Uncommon Potion and Spider-Man: Wall-Crawler.  I was very relieved when I took a closer look at the Spider-Man card and realized it wasn’t Webslinger (pay a fist to get all opposing dice to block him) the way I’d originally thought.  Considering I had only one non-fist character on the team, that could have been very problematic. 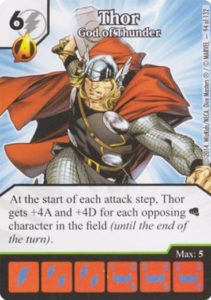 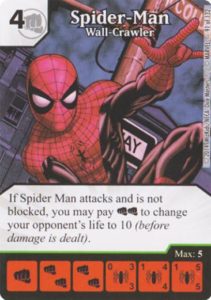 I actually managed to get Lantern Battery out on Turn 3.  Combine that with the fact there were several turns where he had only a single Thor die in his field to block with, allowed me to wear him down.

Another Immortals team.  Was it Asgard Day?  I never got the memo.

He also had Limited Wish on the team and while he didn’t always land the Action face when he drew it, when he did he got the character face on the roll EVERY! SINGLE! TIME!

I bought Lantern Battery early this game also, but it didn’t help much, because he grew his field so quickly I couldn’t attack much.

Eventually, he got his field big enough I couldn’t cope with it.

I threw this team together without much in the way of careful thought, and it shows.

First off, having only one character with a purchase cost below 5, and that character having fielding costs of 1-2-3 was not smart.

Next, I didn’t have enough ramp, or at least not enough to offset the aforementioned mistake.

And, I probably went too far on the character requiring multiple blockers angle.

Pym Particles did little on this team.  A cheap character with low fielding costs would have been much more useful.

The SR Lantern Battery should be a very useful part on the right team.  I’ve never quite managed to figure out what that ‘right team’ is.  This team certainly is not it.

One Reply to “Assault and Battery”