So, after having an Immortal team in the works for a while and struggling between a lot of different approaches, I realized I’d never learn which approach works if I don’t try one. Hence this team.

The Team: Pain that will not die.

The main strategy has four parts. Sif gets stronger thanks to Thor (who is otherwise fairly useless), and Jane Foster serves to make both Sif and Thor cheaper to purchase, while Jarnbjorn gives them Overcrush, which is how I would win. 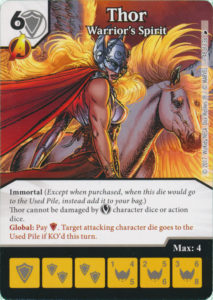 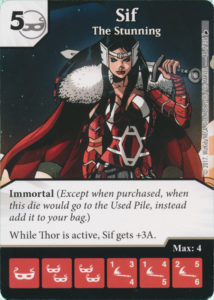 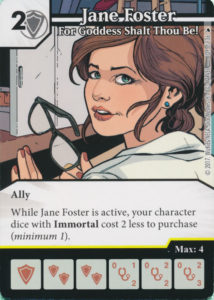 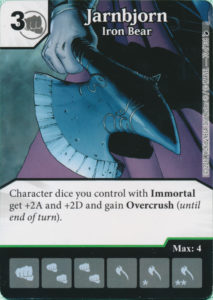 Heimdall and Resurrection serve for ramp (I put two dice for Heimdall expecting to purchase the character, but it never happened), and Cyborg for consistency (and an Overcrush counter),

Get Thee Hence went in the team because I like that it’s a slightly one-sided Power Bolt, but I could’ve chosen better. Shriek is for Shrieking. UC Hela was a mistake; I just never got around to using her, since Sif and Thor hurt enough on their own.

With that said, on to the games.

Game 1, I was up against SR Ultraman. My first couple of turns were weird. I went first. Since I want to use Heimdall on turn 2, I can’t use Resurrection on turn 1. so I fielded a sidekick and bought Jane Foster. Then, on turn 2, I bought Shriek, used Heimdall, and used Cyborg on my sidekick to be able to Res (and guarantee Jane+Shriek turn 3). T3, Jane hit the board, and I started buying Sifs and a Thor.

This team’s pacing wasn’t T4 or anything, but it was quick. Due to Immortal, Sif just kept coming back. A couple of bad rolls from the Ultraman team led to a massive Jarnbjorn-powered Sif+Thor attack for the win.

I was up against an X-men team. This one tries to use a lot of removal, but its removal works best against small characters. I went for a similar opening as in game 1, which felt weird, but worked really well. The second Sif started hitting the field, she was just too hard to get off the field and I put some pressure. Similarly to game 1, I went for Thor, and Jarnbjorn, and overcrush’d my opponent down to 0.

This time, I was up against Jubilee + Cube. And this one didn’t go so well because of one turn. I was set up to essentially go for Overcrushing insanity the following turn, and my opponent, on his reroll, got Cosmic Cube and four sidekicks on character faces (with Jubilee on the field). I call shenanigans, that roll should’ve been illegal. But he won.

This game, I was up against a C Hulk+Babs team. I stuck to my same opening even though we each had Heimdall (having a sidekick fielded T1 meant I couldn’t do a double Heimdall). While I was afraid of Hulk’s damage, by the time Hulk hit the field, I had already bought a bunch of dice (3 Sifs, 1 Thor, + Jarnbjorn). So my energy was free to use my opponent’s Magic Missile global to get Hulk off the field. So I took out my opponent’s life chunk by chunk and outpaced Hulk for the win.

-I really should’ve put Chalkboard. Since I rely on Jane to discount my characters, having Chalkboard to field her turn 2 would’ve been really helpful. Chalkboard also works much better with Heimdall than Resurrection (you’d think I’d have learned my lesson).

-I really wish I’d tried C Fandral instead of Hela. Fandral could’ve been a fun way to get rid of high-cost characters, and I like his stat line quite a bit.

-I was looking at fielding discounts (like Nick Fury or Commissioner Gordon), but decided against it. I slightly regret it, but since Immortal dice go to the bag when they go to used, even if they’re used as energy, that leads to interesting strategic options; keeping an Immortal die on double energy to field 2 other characters is a legitimate option.

-I’m glad I went for the common Sif (versus the uncommon); being able to get +3A just for having Thor, instead of building up a big field of Immortal characters, was much, much faster and more effective. When you have Thor active, Sif is a 5-cost (3 with Jane) with 6-7-8 attack! (8-9-10 with Jarnbjorn) That’s some really good attack for the cost.

-I got lucky that no one ran Blink-Transmutation. Nefarious Broadcast would’ve been far superior to Get Thee Hence.

Overall, Immortal worked much better than I thought. I was pleasantly surprised. I’ll definitely have to experiment with other Immortal teams in the future.