If you’ve been following this site and reading my posts for a while, it’s not exactly news that I like to experiment with what can be considered overlooked or underappreciated cards.  I like to take such cards and see if I can make something workable out of them.

Not that I’m expecting to produce anything meta-breaking.  I’m more looking for something that’s a little different, but fun to pilot and capable of holding its own at an ordinary weekly Dice Masters event.

This week’s event was the usual – Unlimited Constructed.

This week’s build started with the idea of seeing if there was some way to use the new Amplify keyword to my advantage.  Characters with that ability spin up a level whenever their controller uses an Action Die.

I ended up with a team based primarily around a combo using these three cards: 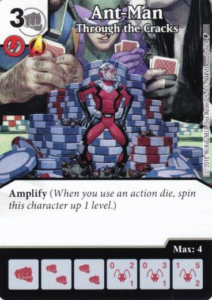 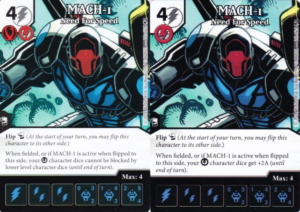 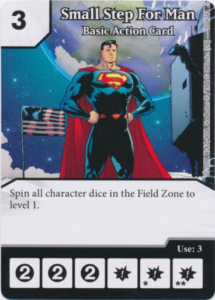 So, the plan is get Ant-Men dice (more than one, preferably) in the field, trigger Mach-1’s A side, and use Small Step for Man.  My Ant-Man dice end up at Level 2, all my opponent’s characters are at Level 1, so Ant-Man can’t be blocked.

It’s going to take a lot of Level 2 Ant-Men to wear down an opponent, so I need something more.

On their burst or double burst faces Bat-Signal Action Dice allow you to flip character cards you control.  Putting them on the team would both allow me to flip Mach-1 more frequently than the beginning of each of my turns, but, since Bat-Signal is Continuous, offer me better control of when I did it.

The Rare Bat-Signal is the obvious choice, but I have gaps in my collection, and the Bat-Signal Rare happens to be one of them, so I made do with the uncommon.

Acererak went on the team for his global – I needed any Bat-Signal dice I fielded to be on burst or double burst faces.

Uncommon Sabretooth was included to give me a possible means of spinning up my attacking Thunderbolts characters, hopefully making them effectively unblockable. 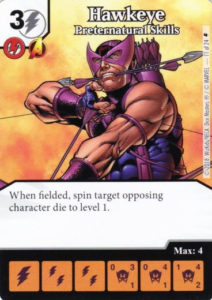 seemed like a decent fit, being a Thunderbolt with an ability that allowed me to spin down opposing blockers.

Common Angel from XFC was added to give me an option to spin up characters.  Songbird was included as a cheap Thunderbolt character.

Finally, I decided on Misdirection as my second BAC.

Old school Justice League team along with Hulk Out to give his heavy hitters Overcrush.

I hit him for 11 a few turns in when I flipped Mach-1 to his B side, and sent an Ant-Man and a Mach-1, both at Level 2, through his empty field.

He got some good licks in and got me down to 4 life.  On my final turn, I had an Ant-Man and a Mach-1 in the field, along with a Bat-Signal, when I flipped Mach-1 from Side A to Side B.  I drew a Small Step For Man, and another Bat-Signal and managed to land both action dice.

I used Small Step For Man, so Ant-Man wound up at Level 2 while everything else was Level1. I triggered the (old) Bat-Signal die to flip Mach-1 from Side B to Side A, which made Ant-Man effectively unblockable.  Then, I moved the newly rolled this turn Bat-Signal from my Reserve Pool to my Field Zone, triggering Ant-Man’s Amplify ability and spinning him up to Level 3.  Then I triggered the new Bat-Signal to Flip Mach-1 back to Side B.

So Mach-1 had been flipped to Side B twice during the turn – once at the start, once with the second Bat-Signal.  My Thunderbolts got +2A for each flip, or +4A in total.

So my unblockable Level 3 Ant-Man had 9A, just enough to get me to lethal.

This was against the young daughter of one of the regulars in our group.  The daughter has only just started showing up – I think this was her second week.

The team was a mish-mash – Pepper Potts, Gambit, Psylocke, Iceman, White Tiger.  It seemed more a bunch of a characters, than an actual team.

Now, I once sicced a Half-Elf Bard team on a little kid even younger than she was (see here), but that was at a highly promoted local Special Event Tournament.  This was a routine weekly event, so there wasn’t really anything to be gained by curb-stomping her.

So I took my foot off the gas pedal, and played an almost entirely defensive game (and kept reminding her she needed to roll her dice from her Prep Area as well as the four from her bag each turn).  We ended up going to time, and she ended up edging me out on life.

Faster than my team, as you already know from Jourdo’s Big Foot post.

The team isn’t terrible, but there’s definitely room for improvement.

I think I’m going to have to borrow a Rare Bat-Signal and see how much better this team is when I swap it in, at some point down the road.

Small Step For Man is a useful piece on this team, but I think I made it too big a part of my plan.  It was something I was expecting to need to use, but there were occasions where I’d pull it when my opponents had nothing but Level 1 characters in the field.

Going in to the event, Small Step For Man was my Plan A, and Hawkeye my Plan B as far as spinning my opponent’s dice down.  In retrospect, I think I would have been better off if I’d been thinking the other way around.

What overlooked or underappreciated cards have you found uses for?  Let us know in the comments.