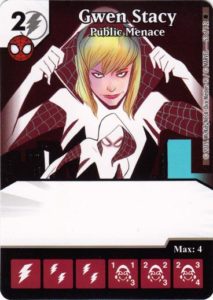 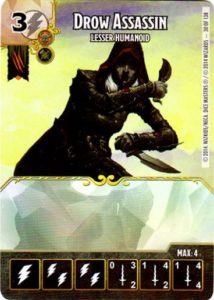 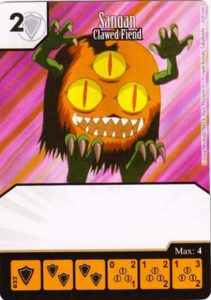 had blank text boxes.  I figured I’d throw them on the same team and see if I could get the “Win a Game using only cards with Blank text boxes without using then Team Up BAC” challenge.

So how do you win a game with all blank text boxes and no Team Up BAC?  Affiliations, including Bat-clan are denoted by symbol, not text, so Dark Avenger looked to be one option, 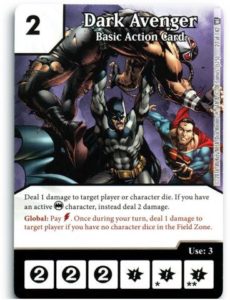 Looking at Drow Assassin, I noticed it was Equippable.  And there are BACs which count Equipment.  Flaming Sword is the best of those in my view so I included it and added some cheap blank text equippable Orcs as a Plan B. 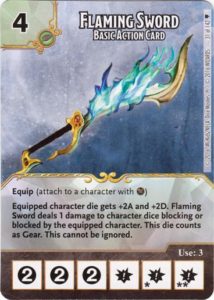 The last card on the team was the blank Electro from ASM.  I had Hulk:  Calculated Devastation from GOTG on the team at one point, to give me access to at least one beefy character.  Then I realized he was the only Modern Legal card on the team, so swapping him out for a character that wasn’t would let me meet another challenge.  Electro is nowhere near as ‘beefy’ as Hulk or course, but If I’m excluding Modern legal cards, there’s not a lot to work with in that area as far as blank text box cards go.

Brotherhood team.  This was a very long game – he had forgotten to bring any ramp, and I’d essentially been required to forego it.  Most of my characters were cheap – his, not so much.

He’d grabbed two of the three Dark Avenger dice.   I’d done him some burn damage and he was having a miserable time with his rolls.

I’d bought Gwen Stacy, Sangan and Drow Assassin to try to satisfy the spirit of the character challenges.  I’d bought Catwoman and Nightwing dice because my plan required an active Bat-Family die, so I bought multiple Bat-Family dice for redundancy.

I had dice for six different characters in my field, and another die for a 7th character in my Used Pile.  My opponent still had a relatively small field, and I started to wonder if I could buy an Electro die and get eight different (non-Sidekick) dice in my Field Zone at one time (which would satisfy one of the gameplay challenges).

So I switched my focus from winning the game to trying to meet that challenge.  And ended up not doing either.

It took him about five attempts before his first success, but he was able to eventually start spinning up his Rare Scarlet Witch (using the Mutation global) to field other Brotherhood characters for free.  Since he had Rare Avalanche out that dealt 1 damage to my entire field.

And most of my characters had fairly low D.  Then he finally managed to field a Magneto die that had been very reluctant to come up on a character face for him – except for that one turn where he had only one energy and it had a fielding cost of 2.

Having his Magneto out meant I had to spin down all my characters (since none of them were Brotherhood) at the start of each of his turns.  Which pretty much meant I was done for, since most of my characters were 1 D at Level 1 making them extremely susceptible to Avalanche.

He missed an opportunity for lethal – he’d calculated he could hit me for 18, and opted to attack with only a couple of characters, forgetting he’d hit me with a few Dark Avenger dice much earlier in the game and I was only at 17.

I mention this because, while he finished me off shortly afterward, five minutes afterward he made a comment that made it clear he’d only just THEN realized he’d had lethal if he’d included the earlier damage.

Apparently he was so focused on playing him team to get a 20 point swing he’d missed what I was and am pretty sure is the pretty obvious implication that he’d had lethal if he’d seen it.

This was an Adam Warlock/Madame Web team.  He was also using UC Hush for ramp, which meant he brought along a couple of Bat-Family characters of his own.

This opponent also gave me a bit of a chuckle with his last turn.  My field was empty as I’d seen Madame Web in his Prep Area and figured anything I left in the field would only end up blocking her anyhow – although in retrospect maybe I should have left one die to actually block her.

Anyhow my opponent had been using a Flip Catwoman as the active Bat-Family character to KO Hush.  He didn’t need Hush for ramp any more, but he forgot to flip Catwoman at the start of his final turn.  He fielded multiple Hush dice, even though they were Immediately KOed, as he had plenty of energy.  Then, as the last thing he did before he attacked for lethal, he used a Misdirection action die to swap in an Adam Warlock die.

Yep, he had a means of getting Catwoman out of the field, so he could have kept his Hush dice active – and it never registered with him that he did.

Well, it seems to have been Tunnel Vision Sunday today.

Important lesson I’d forgotten and re-learned today:  When running a Dark Avenger burn team and you win the ‘coin toss’, make your opponent go first so you can (hopefully) buy two thirds of the available supply.

The main reason I played this team was to satisfy three of the Character challenges in one go,  Since none of the Characters in question were Modern legal, I checked off the “entirely NOT Modern” challenge at the same time.

Winning a game with it would have been nice, but it wasn’t something I was really counting on.

It was interesting to play, but I don’t think I’d call it fun.  Bat-clan cards with blank text boxes and Gwen Stacy:  Public Menace all have nasty fielding costs.  And I’m unconvinced that equippable blank text D & D characters with Flaming Sword (and possibly another Equipment  BAC) is a viable strategy.  Yes, I included it as my backup plan, but that was because I couldn’t think of any better option, not because I was particularly impressed by it in the first place.

One Reply to “Achievement League Round IV – Blank Slate”