Note:  The local Achievement League was off for Easter this weekend, so I’m actually doing this writeup on my team from last weekend.  Some of my recollection of the gameplay is a little foggy – my original plan for this weekend to do a writeup for an event that wound up being cancelled, so this was Plan B.

But which characters to use?  I had 19 options available (having already used 6 of the total 25).  As each character has to have a purpose on the team, I decided to go with an Owlman Villains team. 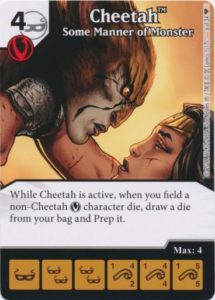 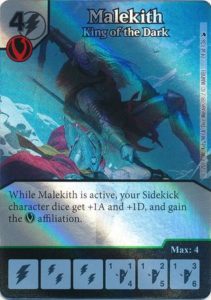 As I don’t own the Owlman SR, that meant I’d go with the common which gives Villains a +2/+2 buff when fielded..  Since Cheetah was on the list, I decided to with Cheetah-Malekith ramp.  To give credit where it’s due, I first saw mention of this in a Trubie video from a few weeks back, but the idea is with the two of them both active any time I field a Sidekick, I get to prep a die.

Bucky and Evil Deadpool were included because they had the cheapest purchase costs of the villains available from the Character challenges.  I eventually opted to include the Emma Frost (UXM) Super Rare, thinking If I could get her out, she’d be great for blocking an attacking fist character.  That didn’t work out – I only bought her in one game, which ended before I got her onto the field. 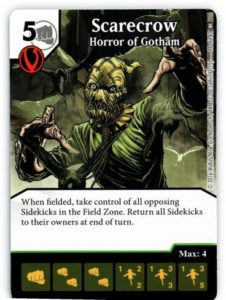 Next came the uncommon Scarecrow from World’s Finest.  With Malekith, when I field Scarecrow my opponent not only loses the ability to chump block with Sidekicks – those Sidekicks become 2/2 attackers for me.  Unless I’ve managed to field Owlman on the same turn, in which case they’re 4/4.

Finally, I threw in the common Hellfire club for four reasons.  One, the fielding costs on this team are a little high, and it can help mitigate those.  Two, it’s a 2-drop, and since all the characters cost at least 4, I needed something a little cheaper.  Three, additional ramp.  Four, it’s a source of fists for the +2A buff to a villain global on The Outsider BAC, which I was running.

BACs are easy on Villain teams.  There are three obvious choices – Villainous Pact, Exposed! and The Outsider.  I decided to go with the latter two.  Partly because Villainous Pact sees a lot more use than the other two and I wanted to be unconventional, and partly because I had other ramp sources and saw no need to make the VP global available to my opponent.

This was against a team of promo characters.  He pecked away at me, mostly with the Catwoman that makes the opponent lose 1 life when fielded.  I got Cheetah and Malekith out fairly quickly and attacked steadily with any Sidekicks I could get into the field, eventually wearing him down for the win.

This was what I’m going to call a funhouse mirror match.  Jourdo opted for the Character challenge approach that day also, and we wound up using several of the same characters (if usually different rarities) – Owlman, Bucky and Evil Deadpool to be precise.

The game itself was not particularly memorable, I’m sorry to say, but I wore him down for the win.

Gobby-Tsarina.  I kid you not.  Somebody missed a memo.

The basic premise of this League is not to crush your opponent into submission, but to highlight more creative ways to play.

-Jourdo, from his “Achievement League 3 – All Hail the King” post

The opponent admitted he did miss the part about not being able to use SRs to gain the ‘Win a game by non-combat damage only’ achievement.  So I don’t think he got points for anything but wins on the day.

If anyone actually wants to read a summary of the game, here goes:  He fielded Sidekicks.  He fielded a Gobby, which he left in the field – he was apparently stickting to the non-combat damage idea, even if it wasn’t really relevant.  He bought and fielded a Tsarina, and another, and another.  I kept blocking them, judging it to be the best of bad options, but never could get enough characters into the field to have enough to spin down and my life steadily evaporated.

UC Malekith is a really fun card with a lot of potential for shenanigans.  I like Malekith-Cheetah ramp, but have to concede it takes time to get it started.  I also like the Malekith-Scarecrow combination.  Bucky, Emma Frost, and Evil Deadpool were only there to meet the character challenge, and I would swap them out for other (cheaper) villains if I were to play this team again in a more serious environment.  Still, I do think there is the core of a viable team here that might be worth revisiting at some point.