With Avengers:  Infinity War cleaning up at the box office, sooner or later somebody here had to showcase a related team, right?

We’ll get to the Infinity War connection in a moment, but the team actually begins with the old Pick Your Battles Basic Action from Justice League and the uncommon Squirrel Girl (GOTG) and the uncommon Chipmunk Hunk (THOR). 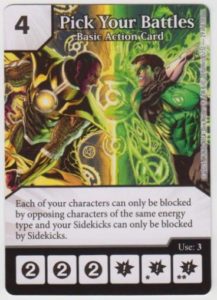 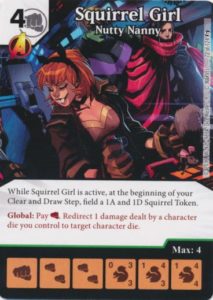 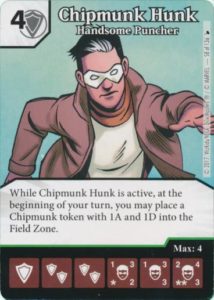 Squirrel  and Chipmunk tokens have no energy type and are not sidekicks.  So If I use Pick Your Battles, those tokens become unblockable.  Let’s include The Front Line so they get +3A when unblocked.

Now, how to trigger both of those Basic Actions at the same time?  How about OP Thanos?  The problem with that is he’s a 10-cost.  You don’t buy 10 costs the regular way.  You either use Limited Wish, or Uncommon Collector.  Only one of those has a connection to the Marvel Cinematic Universe, so I went with Collector. 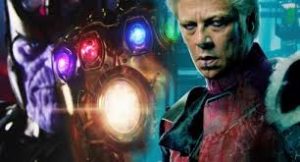 Dragon Team with Golden PXG and Elf Druid.  His Golden PXG and my Elf Thieves ended up giving me a big ramp advantage.  I got a Squirrel Girl and a Chipmunk Hunk out and started fielding two tokens every turn.  Then I got Collector out and used his ability to grab a Thanos.  My opponent attacked with his Breath Weapon 1 Gold Dragon to clear out my tokens (and a bunch of sidekicks) before I could field Thanos.  That was really just delaying the inevitable – as long as I could keep Squirrel Girl and Chipmunk Hunk in the field I would be able to field two new tokens each turn, for 8 damage if I chose to attack with them and Thanos.  So once I got him out, that was basically game.

Old school Warriors Three team with the uncommon Green Lantern from Justice League that gives other attacking characters +2A and +2D.  Absolutely brutal to try to defend against.  He got enough early to pressure we enough I was never able to afford to buy Collector.  Even so, I think this is a game I could have won if I’d paid better attention.

I’d managed to survive one big swing of his without using (and losing) any of my tokens to block.  I had bought a Pick Your Battles die and landed it on my next turn.  I had 7 Squirrel tokens, 4 Chipmunk tokens and 6 sidekicks in my field to his 3 sidekicks.  He had a Hogun die to block my Squirrel Girl, a Volstagg to block my Chipmunk Hunk, and a Fandral die to block the 1 Rocket Raccoon die I had in the field. I also had a level 3 (3-3) and a level 2 (2-2) Elf Thief in my field while he had one mask character to block with – I’ve forgotten whether it was GL or Mimic, but it hardly matters.

Backing up a little, after fielding every character I could I ended up with 2 bolts and a question mark in my Reserve Pool.  I spent it all on a Rocket Raccoon die, thinking it wouldn’t really matter.  (Spoiler Alert:  It mattered.  Or at least it should have,)  Then I went on to do the math that told me I couldn’t get lethal.  The likelihood of my surviving another attack from my opponent was somewhere between slim and none, so I concluded I was doomed. 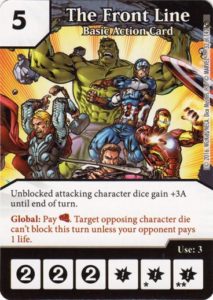 If I’d remembered the global on The Front Line, and used the question mark to use said global, I could have brought my opponent down to 1 life.  Why does that matter when he ran me over like a runaway freight train on his next turn?

Because before he did that in the Attack Step, he had to go through the preceding steps.  And in his Clear and Draw step, he took a point of bag burn.  If he’d only had 1 life left, that would have finished him.

I should mention my opponent in this game is notorious around the local scene for his willingness to inflict bag burn.  He tends to do it more in the early game than the middle or late game, but it’s pretty much always a possibility with him.

But I didn’t think to allow for that possibility, so this is going to be my “One That Got Away” story for the next little while.

Unfortunately, only three players (including myself) made it out on this night, so I was only able to play two games.

Game 2 showed a flaw in the team as shown.  Using Collector to get to Thanos isn’t bad, but my plan for getting to that 6-cost Collector was a little lacking.  It was kind of my Game 1 opponent to bring Golden PXG to fix that mistake for me, but I can’t rely on my opponents to do that for me.

Other than that, the team was actually quite fun to play.  It’s certainly a little on the slow side for a truly serious competitive event, but for more casual events, it seems to be a decent team.

One Reply to “A Token Effort”