Last week’s try with Corrupt didn’t turn out so well, but I felt this keyword needed another try.  Tabaxi Rogue/Sunspot was too slow for my taste and just didn’t flow well.  This time I went with a different option to make use of Corrupt.  Something that make not be as easily countered as the original combo was. 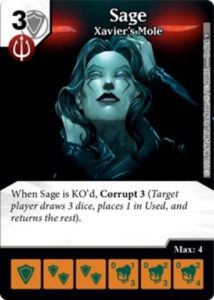 Tabaxi Rogue is still a necessity to make Corrupt a win condition on its own.   Instead of pinging a character multiple times, I decided to make use of a “when KO’d” mechanic.  These are virtually impossible to stop on their own.  Yes, you can shut off Globals that make it easy to KO your stuff… but those are very specific builds.  Sage was going to be the source of my engine for this build.  When she is KO’d, she will trigger Tabaxi’s damage for a solid 3. 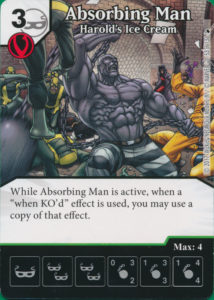 This guy was an obvious addition to finish off the trio.  Have all three of these dice active, and when Sage is KO’d, Tabaxi will deal a whopping 6 damage.  That is not a bad chunk of damage to deal out at one time.

All I needed to add was a trigger to make the KO happen.  Fabricate could work here, but I decided to go the Global route and use SR Malekith.  Unfortunately, this Global only allows one trigger of the engine per turn.  I wanted to stick with Modern in this build, otherwise I would have used the Blue-Eyes White Dragon Global.

Now that the base is in place, let’s look at the rest of the build.

The Team:  A Pinch of Sage.

Full disclosure:  I meant this build to have four Sage dice, but I only had two.  There were definitely times that I would have purchased more copies of Sage throughout the night.

So, I already have half of my Team in place for the combo to fire off.  The rest need to help deal with problems that I might face.  The biggest threats that I saw for this Team were Switch, Widow, and Shriek.  I needed some way to deal with each of them.

With any Tabaxi Rogue Team, large opposing Fields are a problem.  Something I neglected to add last week was an easy add this week:  Green Devil Mask.  It will definitely keep the herd nice and thin and can be good in dealing with Shriek and Widow.  Not very good against Switch.

To deal with that particular problem, I decided to try the new promo Kate Bishop.  When she is fielded, she deals 3 damage to a Villain.  Shriek and Switch are both Villains that happen to only have 3 defense.  This should work well against them, but doesn’t help with Widow (are you sensing a pattern here?).  This Kate Bishop also has the benefit of the Bishtraction Global.  This will help keep my core in the Field should a force attack Global show up.

The third and final removal piece was Mimic… the same one I meant to bring last week.  I wanted to try him out again as I really did not get a chance to see what he could do.  Unlike the above two removal options, Mimic can work against all three of those threats.  He also has the flexibility to become some other tool that I don’t have on my Team.

Mjolnir was purely on the Team for the Global, but the action could come in handy for some pesky removal (if needed).  The Team was light in Bolts, and this Global gave me a better chance of getting what I needed to trigger off Malekith.

All that was left were the BAC’s.  Any Team with Tabaxi Rogue and Green Devil Mask needs to have Instant War on it.  If this action fires, it will help deal damage with Tabaxi and hopefully overfill my Opponent’s Field for a GDM board wipe.

With only one slot left, I realized there was no real back-up plan for this Team.  It was Tabaxi or nothing.  I noted that my core was made up of three different Affiliations that I would need to have in the Field.  With KBish and Mimic, it was very likely that I would have four Affiliations at one time.  It made sense to put on Team Up as a contingency plan if the Tabaxi machine fell apart.

The first game was against a Hope Summers X-men Team.  Dani/Doomlance was the main combo, but he was also using the R Colossus from Deadpool that deals 2 damage to dice trying to block.  Oh yeah… also Switch.  He bought her right away and I went to KBish (and eventually Mimic).  I had no issues removing her with the tools, but she kept coming back… every single turn.  Needless to say, GDM was not firing thanks to that.  I was taking solid damage from Doom Lance (well Dani actually).  Eventually, GDM broke through Switch’s spell and cleared out his entire Field… except Switch.

It took longer to get Tabaxi and Sage out together than it should have.  The dice gods were not smiling upon me for this.  I did manage to get some decent Corrupt triggers, but needed to use it on myself early on as my bag had become a giant mess.  I was down pretty low on life before I was able to start hitting him with Tabaxi burn.

The end came when he attacked with Colossus and Deadpool while I was at 1 life.  I only had two characters that could survive Colossus’s damage, but they were not enough to absorb all of the damage.  I was close on this one.  Maybe one or two more Corrupt triggers.

Up against a combo that I have in my Queue:  Hope/Boom Boom with Ping.  This Team is fast.  With both of them out, it was an easy 5 damage from using one Ping.  My Team is not very fast.  I was happy that I finally got to fire off my combo in this game and hit for 6 with one Sage KO, but that was about it for me.  I was dead in no time.

Old school Infiltrate with SR Angela and Ricochet for insane Ramp.  I saw he had the OP Iron Fist across the table, so Tabaxi would not be highly effective here.  I decided I would shoot for Team Up and get some stuff out and try to swing.  Again, his Team ran faster than mine.  Ricochet was prepping a large number of dice each turn and there was not much I could do about it.  By the time I even thought about buying a Green Devil Mask, it was pretty much over.  The final swing came when he blanked his Angela with Kryptonite to allow his (now) unblocked characters to deal their combat damage.

This Corrupt combo was much better than the Sunspot one.  I think for it to be truly effective, it needs Blue-Eyes instead of Malekith.  Being able to trigger it on your Opponent’s turn would absolutely be a better option here.

When the core combo fired, it was great.  However, it needed three dice in the Field to work.  When your dice do not always cooperate, this can be frustrating.  Without all three characters (Sage, Absorbing Man, and Tabaxi Rogue) this Team could not fire.  Especially Absorbing Man.  He really turned the damage into something dangerous.  Tabaxi and Sage alone were ok… but a slow burn.

Kate Bishop was actually really good here (and on other Teams).  She takes out two of the biggest Villain threats in the game and provides the added versatility of her Bishtraction Global.  This is another very useful promo card.  I can see her making it onto teams in place of her Uncommon cousin (although nothing can ever replace the power of Common KBish).

Mimic proved to be an interesting tool.  He was excellent at removing things and when he stuck around, became a decent threat on the board.  His cost might be a little prohibitive to see competitive play, but I hope he does.  He may not ramp like his other version, but this version is looking like one of the better removal tools available at the moment.

I won’t really go into the rest of the build in detail.  Everything functioned as you would expect it would.  GDM is good board control when it hits.  Malekith is excellent KO on command (on your turn).  Energy fixers are great!  Instant War goes with Tabaxi Rogue like peanut butter and jelly.

The odd man out here might have been Team Up.  I put it on the build as a back-up plan.  However, this is not a back-up plan kind of Team.  It really is an all or nothing Team.  I probably should have included some other Ramp or churn options.  Investigation is definitely one I might be willing to try.  Otherwise, one of the Prep Global BAC’s would be a good second choice.

As a pure Modern wincon though… Corrupt is not all that good.  This version could deal out some decent damage, but needed a lot of pieces to make it work.  For a competitive team, I don’t see Corrupt making a huge impact.  Sure, it can mess with (or help with) bag management, but as a tool on its own it is just lacking.  The only one I could maybe see some decent use of might be Dark Beast (when he blocks, he triggers Corrupt), but even then it would not be the wincon… only a utility piece.

This is where I am sitting with Corrupt.  It feels more like a tool than anything else.  I actually found it most useful when I used it on myself.  It helped to filter through my mess of a bag and get the ship back on course.  I think it is an interesting mechanic, but not a game winning one.  Maybe I have just not cracked the code yet?

After playing it for the past two weeks though, I think I am done with this puzzle.

I’d love to hear your thoughts on Corrupt.  Have you managed to make it an effective win condition by itself?  Do you see it as more of a utility piece than a weapon?

A brief note on the TOTM for June.  Due to some scheduling conflicts on my end, the only day I could make work would be June 22.  However, there is already something Dice Mastery happening on that day.

Troy is running a Faux Nats for those that cannot make it out the the live US National Championship.  It will be a one day online event to play with people from across the globe.

Check out the details here!  If you want to scratch that competitive itch but cannot make the trip, this is a great option.  Sign up for a fun day of Dice Masters with some great people.

As a result of this conflict, there will not be a TOTM for June.  We will return in July for something special for the Summer season.