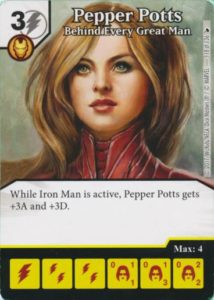 Tonight was all about playing with a specific card.  I used this basic Team a few weeks back in our Format Fail.  It really did not work in that format, but I wanted to try it because Pepper intrigued me.  I liked the idea of a relatively cheap character who gets a decent combat buff when paired with something else.  There are lots of Iron Man choices out there.  Unfortunately, the new OP card is not currently one of them.  He would have been the perfect choice here.  Not having that tool in the toolbox, I thought I would play around with one of the newer versions from the Avengers Infinity Campaign Box.  Iron Man was really secondary to the whole combo.  Pepper was the key.

The Team:  A Pinch of Pepper

So, the core combo is to punch you in the face with Pepper.  That’s it.  I chose to pair her with the life gain Iron Man from Avengers Infinity.  I keep wanting life gain to be a thing, so I thought I would give it another go.  In order to make Iron Man’s ability work, I threw in Magic Missile to give me something to target him with.  It also acts as a removal option.  The problem with Pepper was that I needed a way to get her through.  Overcrush was an option, but I am saving that for the OP Iron Man.  That meant I needed a way to get her around the blockers.  Enter Madame Webb.  Webb, a few Peppers, and whatever else is out would be enough to kill your opponent.  The core is set, so now we need some accessories.

As Bishtraction is a thing and would be a huge thorn in my side, I added in Wonder Woman to prevent my characters from being bounced back.    I needed some control on this Team and didn’t want to go with the usual suspects.  Loki has been calling to me since I got the Avengers Infinity set.  I decided to take him out for a test drive.  Now, the big issue with him is being able to blank the right Affiliation.  Since Villains are the majority of problems, and he cannot target Villains, I needed a way to target something that would not affect me.  Dick Grayson was the choice here.  I could make a Bat when needed and blank it.  Loki’s ability would then blank Dick at the same time, essentially turning off the Global to prevent it from hitting me.

I realized I now have a few 5 cost characters on my Team that I will want to get out.  I needed some options to get to them a little easier.  As tempted as I was to go with my new Bae Thrown Brick, I went with Resurrection.  I am trying to spend some time apart from the Brick so that it does not become a crutch (but it is so, so good).  BEWD was an obvious add to get the discount.  It also gave me the option of cycling out Loki when needed.

With one slot left, and the need for more Bolts, Merlyn was the final add.  The fixing Global gave me the bolts I needed and he is a decent back-up plan if things go completely off the rails.

Let’s see if I could hit hard with Pepper.

This was against our new younger player.  She is still learning the basics of the game, this was not played optimally at all.  I bought up Peppers, then Iron Man, then Madame Webb (taking my time doing so).  I tried to hold back as long as possible, but eventually had the whole thing set up and really had no choice but to swing.  OTK with Pepper and friends with the help of Webb.

Guardians!  Son of L will be writing this one up, so I will leave out the Team details.  It was an really interesting build.  Loki came out to play since targeting Guardians was an easy choice.  However, this is where his weakness was obvious.  My Opponent could just pay the 2 life to ignore the ability.  I was able to cycle Loki after the charge, but I had to keep refielding him to drop him by two life.  I took a few hits from a fairly buffed Agent Venom, but managed to set up the core combo.  I didn’t need as many Pepper’s here as Loki did actually soften him up a bit.

This was against one of my all time favourite WTF Teams ever.  Again, I will leave out the details here as I am planning something with that Team.  I knew I was on the clock with Team.  I had to move to set things up quickly.  That would have been the smart play.  However, I decided to mess around with Loki more.  His combo required certain Affiliations to work.  I just kept fielding and refielding Loki’s naming a different Affiliation each time.  He burned down to about half life.  I did start purchasing the pieces to the combo, but did this a little too late.  His combo fired before I could get them all out.  I did enjoy watching the combo fire though.  I will have some more info on this Team up shortly.

It was super fun punching people in the face with the little Pepper Potts.  Like I said at the beginning of the article, I think she will be a better pair with the OP Iron Man when he shows up.  Definitely will want to try this combo again with him.  Otherwise, it worked how you would expect.  Madame Webb is a great choice here, but Overcrush would have worked as well.  Pick your poison.

The bulk of the Team functioned as you would expect.  Wonder Woman never came into play tonight as Bishtraction was not there.

Let’s talk about Loki though.  He was really the most fun part of this Team.  Sure, your Opponent could avoid his ability by paying 2 life.  But do this over and over and over again and it is some decent burn damage.  The trick is having an Affiliation that will not affect you.  Dick Grayson was a good choice here as it turned off if Loki’s ability was successful.  Kind of like an auto-protection.  This is definitely an ability I want to work with some more.  I like these kind of cards that make your Opponent choose what happens.  He is something that I feel could be really fun as the star of the right Team.  I don’t really see him being meta defining, but he is a great casual piece to play with.

Have you played around with this Pepper?  What have you done with her?  What about Loki?  Has this version found his way onto your Team?  Let us know what you have done with these in the comments below.