No, last week wasn’t a one-off; we’re still back and kicking! As I alluded to last week, we decided to do something wacky for this event: every card, no exception, must come from the same set.

I couldn’t run Turtles since someone else called dibs (sorry jbouwme!), but I went for the next best thing. And you could say it was…

The Team:  Why did I do this to myself?

Format: Single set (every card must come from same set)

For this, I’m going really, really old-school. I went with UXM and tried to make Heroic work.

For those who aren’t familiar, Heroic works as follows: you field a character with Heroic, you pair them up with another character that has Heroic, and until your next turn only, the two paired up characters have some kind of added ability or stat boost.

Sounds good, right? Except Heroic always had 3 major weaknesses: you have to have two Heroic characters at the same time (one active, the other fielded), it only lasts one turn, and getting your Heroic characters off the field so you could trigger Heroic again was a giant pain in the rear. Those flaws are still here, but let’s try and make it work anyway!

You’ll notice three characters with Heroic: Captain America, Red Hulk, and Angel. Cap and Hulk are the two main pieces, ideally buffing each other (total of +7A/+4D to each one!). So if I pair up Red Hulk and Captain America, a level 3 Red Hulk would have 15A! And Angel? Well, he’s cheaper, and can pair with either of them if they’re active and can’t get off the board. Further, Angel gives me Shield energy, which is important (I’ll get to why in a moment). 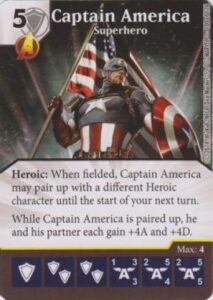 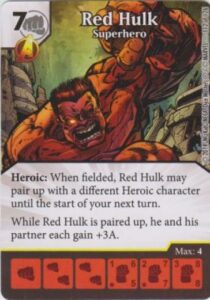 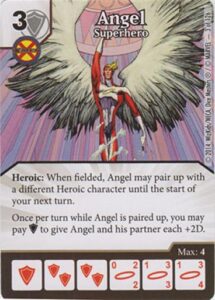 Now, there’s a key problem: how do I get damage through to my opponent? There are no abilities that give Overcrush in UXM, and my team must be made only from this set. This is where Falcon comes in, alongside Transfer Power. I field something with Heroic while another Heroic character AND Falcon AND some sidekicks are active. I attack with Falcon and the sidekicks (who thus can’t be blocked), use Transfer Power’s global to give my Heroic character’s attack to an opposing character, then I use it again to transfer that attack back to my sidekick.  If I pair up Cap and Red Hulk, their combined attack should be enough to win if I have the energy to give that attack to my sidekicks. 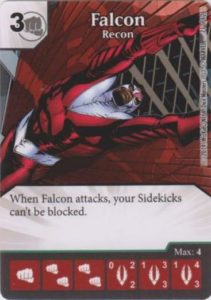 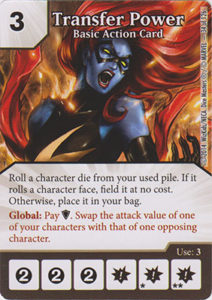 Now, to get this out of the way: yes, my opponent can save shields and force me to spend more of them on Transfer Power. Which is why I like the idea of using more Shield-type characters (like Angel) where possible.

I also need some ramp that will put me in an advantageous position. And this is where good ol’ PXG comes in. You knew I had to go there; with my main pieces costing 5+, I needed big ramp, and he’s the best ticket. Plus, he makes my sidekicks bigger, which is very welcome in this setup. I also need a cheap mask die to best take advantage of PXG. Enter Psylocke. She’s great mask fodder, and if I field her, she can do some removal as a bonus! 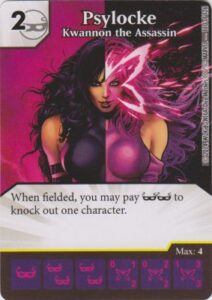 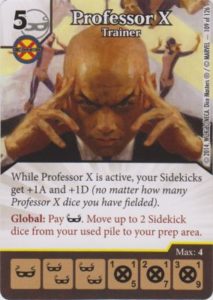 As for the rest of the team, I threw in Cable as a secondary win condition in case Heroic and Falcon both get shut down. I also added Enrage for the global, which helps me get some more points of damage in. And finally, I added Scarlet Witch for laughs; I always wanted to see if that SR was worthwhile and never got around to using her. 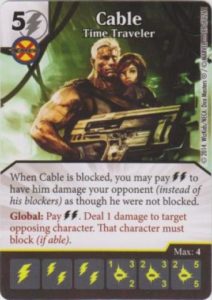 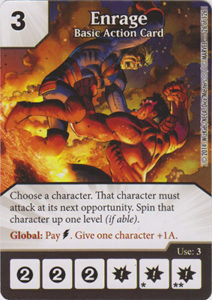 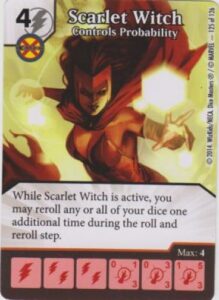 My first opponent was running Turtles. Turtle Power galore, and he ran Leonardo: Multifolded Steel, that essentially has Retaliation for Turtles, which was an interesting choice. Sadly though, he never got there. I got to use PXG, and he never got the energy to get PXG going. So by the time I had Cap and Hulk purchased, he had no Turtles and a thin field (2 characters). So I won by fielding Psylocke (and using her effect, bringing my opponent down to one blocker), alongside Cap and Red Hulk. I attacked with the 3 of them, Red Hulk was the only one blocked, so I used Transfer Power twice to get Red Hulk’s attack over to Psylocke. I dealt 25 damage and won. Felt dirty on that one.

My opponent ran WWE and did a mask-based Asuka team with the 7-cost Rock as his win condition (note: we allowed team packs alongside the campaign box). That was an excellent matchup for him; he could ramp with masks for days, as that’s the main energy type he used. Between his Asuka discounts and a perfect ramp engine for him, his team ended up being faster than mine. I did have one turn where ALMOST everything fell into place, but due to fielding costs, I was missing 1 energy to get all my unblockable shenanigans in place. He had no such issues and won a couple of turns later. Kudos to him.

My next opponent chose to use the first D&D set (BFF). He banked heavy into Swarm to eventually get his Overcrushing Purple Worms. He chose to rely on Swarm for ramp and didn’t use PXG too much. I stuck to PXG and while I didn’t get my Falcon shenanigans going, I kept attacking with beefy characters, forcing my opponent to block and making Swarm less useful. I eventually attacked with more than he could block and brought him at a low enough life total that when Falcon finally hit, one sidekick (with Cap+Hulk’s Heroic effects) was enough to win.

For my last match, I faced a JL team based on the actual Justice League affiliation. Lots of retaliation shenanigans, where most characters sit back while Zatanna attacks, blocks and hopefully gets KO’d, resulting in Retaliation. My opponent bought Constantine: Hellblazer on Turn 1, so I knew Heroic was out the window and I had to pivot. I got Falcon and Cable, both of which ended up being important. I got most of the damage I needed by attacking with Falcon and using Transfer Power to give his Justice League’s attack (including a 7A Superman!) to my own guys.  Eventually, my opponent had little life left, and Cable was there to sneak in the last few points of damage. My opponent didn’t have enough damage on the board to win (he was close though!), and I won the following turn.

Important note: Because I had both Cable and Falcon, my opponent couldn’t shut down both with Hellblazer. That was a key to victory, as I always had some damage source that wasn’t shut down. If you play against Hellblazer, always give him two threats to target if you can.

Before I talk about the team, on the overall event:

-Success, everyone was happy with the format overall. It helps that people avoided the obvious broken sets (e.g. AVX, TOA). Everyone managed to get their crazy engines to work at least once. We’ll probably do this format again.

-If people want to know the exact rules we used, I can provide the info if there’s demand for it (lots of particulars to consider, e.g. promos).

-It takes a long, long time to set this up. Ideally, I get: T1 Psylocke, T2 Falcon, T3 Captain America, T4 Red Hulk, T5, try to field stuff, then maybe T6 you can win. Trust me, there no way you can win on T5 with Falcon + 2 sidekicks + 4 shields + Cap and Red Hulk fielded (those fielding costs, good grief!). The only way to win on T5 is if Cap and Red Hulk deal the damage (implying there is an empty field on the other end).

-Psylocke is the unsung hero here. Most players don’t remember her I’m sure, but cheap masks + removal is a great combo that came in handy more than once. The team does not work at all without her.

-I didn’t get to buy Scarlet Witch. It was just never the right time, and in this team, spending the one more for an actual win condition (Heroic or Cable) was just always the better play.

-Some of you will ask, “Why didn’t you use Wolverine: Superhero?” (image below). The reason is simple: I expected people to field enough characters to stop my offence. Forcing people to add blockers means they could just stack sidekicks in front of me. And without Overcrush to help, going for beefy stats with unblockable shenanigans just seemed like the better play. But I admit: he’s a good one and I see how someone would’ve preferred him. 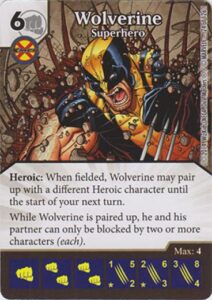 -Note to everyone: if you never played using PXG before, I recommend learning to play using it. It comes up less often seeing as he’s not used in the main competitive formats, and newer players may not know his playstyle too well, but having him in the game completely changes the dynamic. James from DM United has a fantastic video primer on this topic that you can watch right here.

So overall, a fun but slow team that is very strong when it fires off. It was nice to go back to some old classics. I’m more excited about the format though; makes me wonder what set I could revisit to have some good laughs. Let’s try one that wasn’t run this week though. (YGO was also used, but I didn’t play against that one)