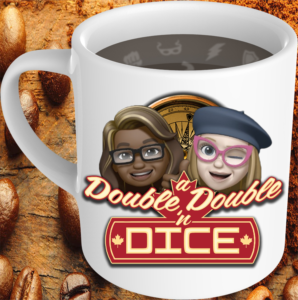 Pour your favourite beverage, pull up a comfy chair, and join Kim and Jocelyn to chat about our favourite dice rolling game, Dice Masters, on a A Double Double ‘n Dice podcast.

We’ll be talking about a different topic each week and hope you’ll join us to sit back, chill out, and enjoy the conversation about anything ‘n everything Dice Masters.

In this week’s episode, we continue our series on Female Characters in Dice Masters with Mary Shazam! We dive into a light Dice Bag and go through all the upcoming events/tournaments including Worlds!.

Jocelyn’s Out of the Shadows article, Investigative Journalism

Until next time, on a Double Double ‘n Dice!

We would love to hear from you! Email us at tripledpodcast@dm-north.com or leave a comment here.

Mind MGMT: The Psychic Espionage Game Board Game In A Minute #shorts
«
Prev
1
/
267
Next
»