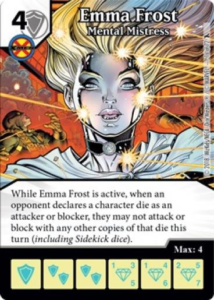 Last week, one of our locals dug a little gem out of the X-Men Forever Campaign Box.  This was a card that I totally passed over for some reason when I first got the set for whatever reason.  When he showed it to me he asked, “Why is nobody playing this?”.  When I took the card and actually read it… I asked the exact same question.  Emma Frost is a great counter for Teams that like to spam with a single character.  Equally as good is that she limits blockers while you are on the attack.  She has such a neat ability that she made it onto DM Armada’s “Cards You Should Try” List.  With all of that going for her, I decided that I had to give her a try this week and see what she could do.  As much as I wanted to step away from the X-men for a while, Emma is keeping the Mutant Train going.

The Team:  Beauty and the Beast. (That would totally have been a better article title)

Emma Frost was going to be the centerpiece of this Team, but she is not a win condition herself.  She needed something to work with.  I wanted to focus my efforts on her ability to limit Blockers, so I decided to use Beast – Here Sir (another one from DM Armada’s list).  You need multiple Blockers in order to block him, so Emma and Beast seemed like a match made in heaven.  Hopefully my Opponent does not have a wide range of characters to work with and I can sneak some damage through with Beast.

Beast himself does not have super stats, so I needed some ways to make him more of a threat.  Here is where my X-men 1-2 punch comes in.  Hope and Cyclops enter the build for their discount and buffing ability.  Now Beast has some better stats to work with.

It can be better though.  Since it looks like I am now committing to a full X-men Team, Teamwork was an easy addition.  Get this to fire with other affiliated characters and Beast is now… well… a Beast.

Since the smell of Sage still exists in Calgary, I chose to put the Xavier’s School Wolverine on the Team.  He would help deal with her tax and make Fielding Costs more reasonable.

My Team depends on combat damage, and having characters in the Field so I added some extra tools to help make that more predictable.  The Rare Sunfire from X-Men First Class makes it really difficult to remove my X-men from the Field.  Pings are no longer a concern, and even combat damage needs to be decent to take them out.  Easy addition here.  Static Field was my next big concern, so I included The Blackbird.  Either the Global or the Action itself would help deal with the bounce back from Static Field.

My last character slot went to one of my personal favorite cards right now, Mimic.  I figured there would be some annoying characters that would be making my life difficult and he was my ticket around them.  We’ve talked about him lots on this site, and I don’t think I need to pump his tires more… but he is awesome!

For the last card, I was still lacking Ramp.  I decided to stay within the Campaign Box for my BAC’s and put in Counterstrike.  It has an OK Ramp Global, but the Action itself could be useful for this particular build.

Mirror Match?  Emma Frost and Beast were the centerpieces with some different tools than what I was using.  Hope and Cyclops were there because cheap X-men are great!  Let’s just start with Emma vs Emma is a slog.  I am pretty sure this game went past time, but our store is not great at keeping track of this.  I managed to get 2/3 Teamwork dice, which gave me a stat advantage.  Sunfire proved really useful to lessen the damage when we entered combat.  Most of the time, that reduction of 2 damage was the difference of my characters surviving and his getting KO’ed.  It took a long time, and I had to work around his Shriek, but my massive X-men were eventually able to clear their way through to victory (he technically conceded on the last turn as the game lasted way too long).

AVX Magneto was back this week to reroll Villains.  That won’t affect me at all… oh crap… he brought JL Lantern Ring for the Villain maker Global… and Rare Raven to prevent me from using those Globals on his characters.  This should be fun.  Hope and Cyclops were the early purchases to set up the discounts.  Wolverine was there for free Fielding costs.  Then the Beast Train started.  Emma and Sunfire came out to make life difficult for him.  He made my life difficult by forcing me to reroll my now Villains.  The Blackbird Action was essential here.  However, I only brought one die for it.  It would save me every other turn it seemed.  Not often enough.  To make matters worse, he managed to scoop all of my Teamwork dice in one turn before I could get to them.  This was now another slog as the best I could do was bleed him slowly with the occasional Beast.  With very few options, I bought pretty much all of my dice and just kept punching.  Again, this one probably went over the allotted time… we really need to start timing our Rounds ourselves.  It was basically my guys punching into his until I wore down his Field to win.

Mirror Match 2!  Hope, Cyclops, Emma, and Beast were all here.  He also had Dani Moonstar as a back up plan.  This would more or less be a race to get things in place first.  We both went for Hope/Cyclops as quick as possible.  This time, I tried to grab Teamwork dice whenever possible as I did not want to get stuck like the last game.  He pivoted to Dani pretty quick and she is just a huge pain.  I was still setting up my Field and could not afford to lose anything so I took way too much Dani damage by refusing to block.  I eventually had to gamble when I was below 10 life, and managed to dodge the Dani damage on multiple occasions.  He got his Emma out and it made attacking much more difficult.  I got a low attack Beast through early for some major damage when he forgot about the Teamwork die sitting in my Reserve Pool.  That immediately made up for the Dani damage.  Mimic was the MVP in this game as I managed to Field a couple on the same turn to remove Emma as well as Cyclops.  I had just enough damage on board to swing for lethal.

I missed the memo where we were all bringing the same basic Team tonight.  It was interesting to see the same core build (Hope/Cyclops/Emma/Beast), but also seeing the different accessory pieces that others put on their Team.

There is definitely something to this Emma Frost.  When I was having to deal with her on the other side of the Field, she was a huge pain in the butt.  When I had her working for me, she was an incredible tool to make Beast a little more threatening.  Is she a competitive card?  The short answer is, I don’t know.  There is so much direct damage in the current meta that I am not sure she has a place.  If combat damage was bigger, I would expect she could see some play.  Her abilities are just that good.

Now her and Beast… That is a good combination.  Beast himself in an interesting die.  The fact that he requires two blockers makes him a useful tool.  Make him enough of a threat and attack with large numbers and he is difficult to deal with.   It really helped to have the synergy with other X-men on this Team.  The buffs from Cyclops and Hope gave him enough of an attack to make him a little scary.  However, Teamwork made him a killer.  If you did not have the numbers to deal with him, you were going to take some serious damage.

Sunfire was a huge boost to this Team as well.  Since the whole strategy was combat based, be gave my side that little extra boost to keep them around.  He is an excellent addition to just about any X-men based Team.

Wolverine was a blast from the past that really helped this Team out.  In the ideal situation, I got him out early (usually after Hope/Cyclops) and then pretty much forgot about Fielding costs for the rest of the game.  His stats are just excellent as well.  He was a great tool to bash against walls to try and thin them out a bit.

While Static Field never showed up tonight, Blackbird is too good not to include here.  I would probably include a second die on this card in another version of this, if I were to revisit it.  The one time I needed it on a regular basis, I was really missing the extra chances to get it.

Hope/Cyclops is almost an immediate addition to any X-men Team I make now.  The double discount and stat boost is just so good on these Teams.  Nevermind that Hope can hop around and become whatever you need her to be.

Mimic is Mimic.  He is awesome.  Best targeted removal in the game right now.  It is too bad his other version is still one of the best Ramp mechanics in the game.  It makes a tough choice as to which version of this guy will be put on your Team.

Counterstrike is… not good.  The generic energy Ramp is nice, but there are just so many better options out there.  The action itself is OK on an Affiliation Team, but I only reached for it once and didn’t see the benefit of it in that game.  I may have to give up on trying to make this work.

Would I play this again?  Yes and no.  No because I am starting to get X-men fatigue with all of the goodies in the new sets.  I feel it is time to step away from these guys for a little bit.  Yes because I think Emma and Beast have a good synergy and I think there is something here.  Maybe they work best in a pure X-men Team like this.  Maybe there are better tools out there to maximize their effectiveness.  Either way, I highly recommend trying these guys out in your local scene.

Have you tried out this new Emma Frost?  How about the annoying Beast?  What other pieces would you put with them?  Let us know in the comments below.