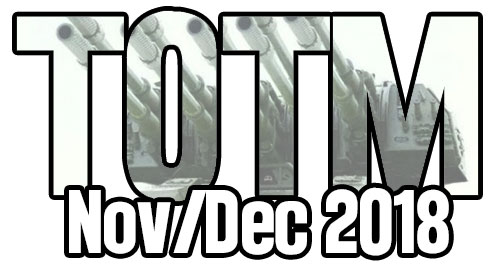 Hello Dice Masters!  Last night, we ran our Winter 2018 Team of the Month.  The theme of the night was BFG’s only.  All of your characters/non-BAC’s had to be 6 cost or higher.  The rest of the build was open to anything else, with the exception of a few cards that made the Ban List.  If you want to read about the details of the build, you can check out the original article here.

This was a really casual night with some fun games and some unique builds.  Here were the Teams that participated:

Unfortunately, I am not technologically advanced to know how to stream this stuff.  Maybe at the very least I can get these recorded in the future.  Either way, I will try to figure something out for the new year. 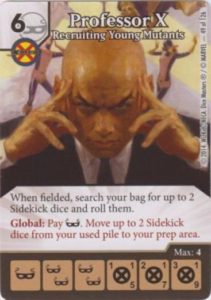 Not surprisingly, PXG made an appearance for tonight’s challenge.  There still is nothing to match the speed and energy production that this card provides.  It made it much easier to get these big cards out.  I chose to gamble that other people would bring it for me.  When that didn’t happen, the game slowed to a crawl.  Definitely a handy tool in this format.

However… as good as PXG was at getting the energy to buy your characters, there was one tool that was even better.  The Uncommon Collector. 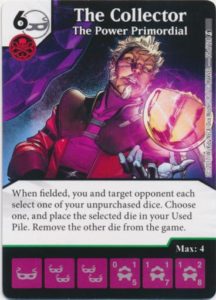 This guy stole the show with “purchasing” your characters fast.  You just needed enough dice on your cards to account for losing a few and you were set.  In a format like this, where you usually needed to get a few characters out to be effective (Reg was the exception), you really could not beat The Collector.  It was a tool that I purposely tried to avoid using for this, but it really was that effective. 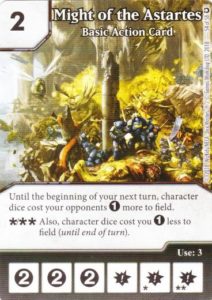 One last card that I want to bring attention to from the night… Might of the Astares.  This card has only been around for a week and a bit and it is already a huge thorn in my side.  This was my second opportunity to play against it this week and I enjoyed it just as much as the first time.  The action itself is a little deceiving at first, but the effects are huge.  Creating a fielding tax on characters that are already more expensive to field is crippling.  The bonus of discounting your stuff is just icing on the cake.  This might be one of those sleeper hits from the Warhammer set to watch out for.

The rest of the builds had many interesting ways to win.  Some classics like Beholder returned to the game, while some newer faces like Fixit and Surtur showed up as well.  Phoenix Force Magneto proved fairly powerful using an old Elf Thief trick.  Blue-Eyes was there to provide some discounted purchases.  Grodd was there to fix energy and punch faces (not as much as I hoped though).  Overall, it was a great mix of Teams tonight.

I decided to let the Wheel of Fate decide the winner for this one as everyone had something interesting to contribute.  After spinning, the wheel has chosen…

Thanks again to all the Dice Masters out there!